Members of the Roland Park Community Foundation say they’re close to meeting their goal to raise $8 million to “put a park in Roland Park” just when bids are due for the land they want to buy.

The fund drive to purchase 20 acres of a former golf course has grown to become a much broader effort, they say, drawing support from residents in dozens of other communities in Maryland and beyond.

But they’ve said in Zoom briefings that they have raised 75-80% of their goal and are making a final push to secure the rest.

“We don’t want to show our hand at this point,” said Foundation Secretary Chris McSherry in an email message. “We don’t know when BCC will make a decision, but we have been told that they will be interviewing the top three bidders and we certainly hope to get an interview.”

Foundation President Mary Page Michel said financial support has come locally and from around the country.

“We’ve had donations from 20 other neighborhoods in Baltimore City as well as another 10 or 20 from out in the County and from other areas of Maryland as well as 13 states. People get it. It’s not something that’s just for us. It’s for Baltimore, for the greater community,” Michel said during a Zoom session last Thursday.

The country club has set May 13 as the deadline for offers from developers and others interested in buying the 20 acres it is selling between its clubhouse at 4712 Club Road and Falls Road. (The club will retain about 11 acres along Club Road that holds its athletic, clubhouse and banquet facilities.)

The club intends to use the proceeds from the sale to improve its Five Farms golf course property in Baltimore County. Instead of setting a price, the club has invited potential buyers to compete by submitting their best offers. 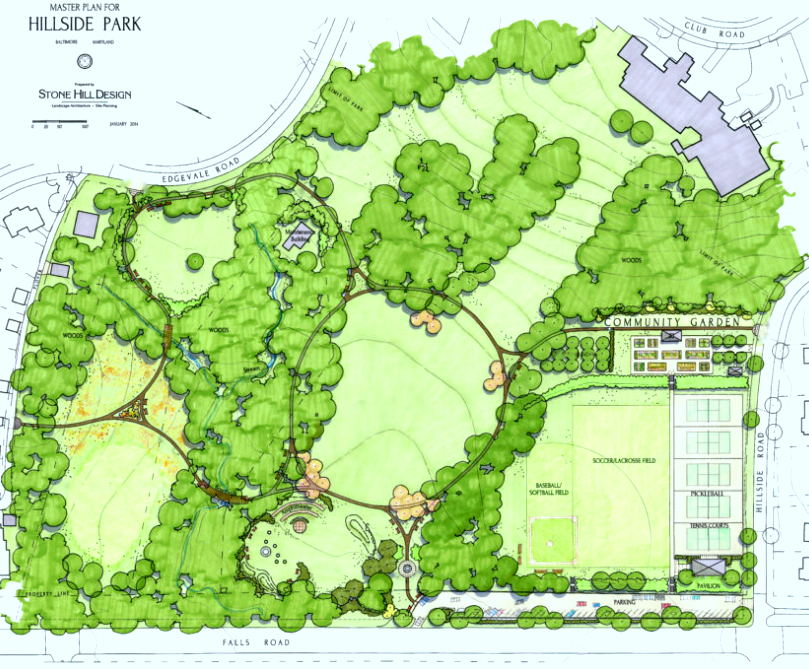 Proposed layout of “Hillside Park” the community wants to create on the 20 acres under sale by the Baltimore Country Club. (Stone Hill Design)

Houses, Institution or a Park

Current zoning allows approximately 50 single-family houses on the property or an institutional use, such as a school or church, or a park.

Last week, Caves Valley Partners said it received nine proposals from developers wanting to construct an apartment complex on the west side of Falls Road at The Village of Cross Keys, an indication of strong interest from builders in the corridor.

Instead of setting a price, the country club has invited potential buyers to compete by submitting their best offers.

In briefing sessions, the foundation, which is affiliated with the Roland Park Civic League, has characterized the competition as a David and Goliath rivalry.

Proponents of the park present themselves as holding the slingshot against homebuilders potentially interested in the land because it’s one of the few large, strategically located development parcels left in North Baltimore.

Is the Price Right?

Without a firm price from the country club, the foundation has set a goal of raising “$4 million to $6 million” for land acquisition, and another “$1 million to $2 million” to make improvements and build an endowment for maintenance if it’s the successful bidder.

Michel said her group knows it will have to pay fair market value for the land, and it is willing to do so. In preparation for its offer, the foundation has been seeking donations at 11 different levels, from $1 to $1 million, including five “leadership’ categories that start at $50,000.

The highest amount announced so far is a pledge of $500,000 from developer and Roland Park resident David Tufaro.

As part of its pitch to prospective donors and to the seller, the foundation has come up with a series of arguments for why it would be in the country club’s interest to accept its bid over a homebuilder’s proposal.

The arguments include good will from the community. The park proposal has the support of nearby Baltimore Polytechnic Institute and Western High School, which would like its students to be able to use the park, as well as a variety of community and environmental organizations such as the Chesapeake Bay Foundation and Baltimore Bird Club.

In a recent briefing session, one participant said he heard that the country club would like to get $7 million to $10 million or more for the land, because that much has been offered in the past.

McSherry said the only way such an amount might work is if the zoning were changed to permit more residences on the property.

As in the past, the Roland Park Civic League would oppose any zoning change that increases density, and that opposition would, at minimum, hold up a sale.

All gifts to the Hillside Park campaign are tax deductible. Pledges can be paid over five years, so donors can “stretch” their gifts. If the foundation isn’t successful in its bid, all money donated for the park will be returned and all pledges will be voided.

The foundation has scheduled a final online briefing session this Thursday (May 13) at noon at rolandpark.org.