During a remarkably contentious hearing – “Miss Madigan, no need to roll your eyes!” – Baltimore County Inspector General Kelly Madigan was grilled by Cathy Bevins and other members of the Baltimore County Council last week and accused of being too “intimidating” as she investigates waste, fraud and abuse in county government.

Above: VIDEO excerpts of Bevins and Chairman Julian Jones denouncing Madigan. The full two-hour May 19 meeting can be viewed here.

• Not publicly posting the job of deputy IG before hiring retired FBI agent Steven Quisenberry (the beginning of this video).

• Wasting taxpayer dollars by using double-side cards that cost $59 more per 500 pack than the single-sided business cards used by “everyone” in county government (starts at 5:12).

“All agencies must list their job positions for new hires. So why did you not?” Bevins demanded of Madigan.

The IG said she was not aware of any requirement that she do so.

“You only have to follow the rules and procedures that you have made for your office, and not what all other Baltimore County directors and deputy directors have to do?” Bevins asked sarcastically.

Non-merit, or at will, positions can be selected by an agency head. A deputy position like Quisenberry’s does not need to be posted based on Naron’s explanation.

Regarding the business cards, Bevins told Madigan, “If you disagree that spending twice as much on business cards than [what] everybody else carries in the county, I have a problem with that.”

Bevins said that she and other members of the county council have one-sided business cards that cost only $49 per 500 pack.

That may be so, but other county officials – such as personnel in Olszewski’s office – have double-sided cards, with the back featuring the on-line address of the county executive.

Such cards appear not so different from the back of the OIG’s card (shown above) except that the county executive’s cards are printed in blue ink: 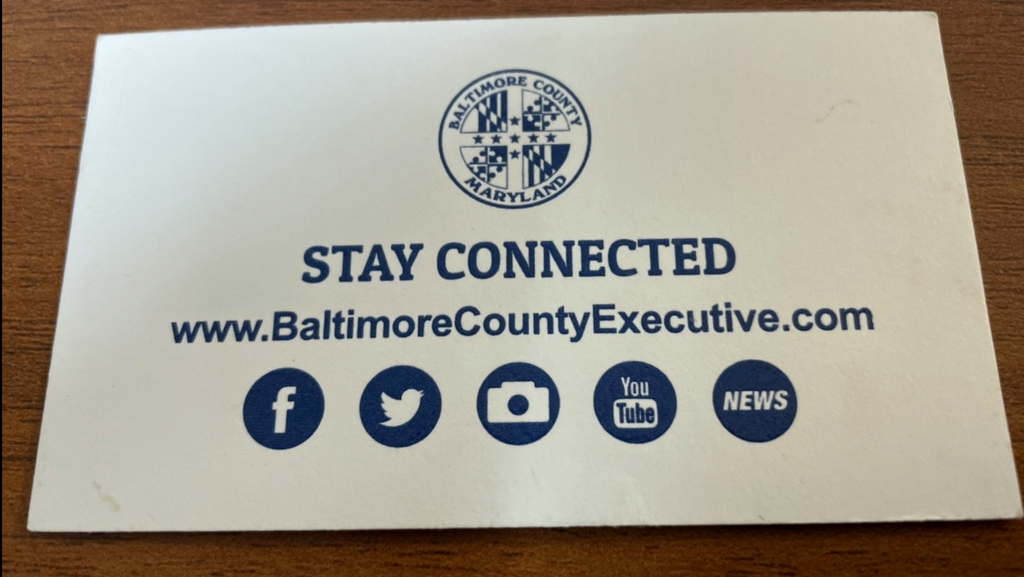 Back of a business card used by a member of County Executive Olszewski’s office. (Mark Reutter)

Another excerpt included here (starts at about 9:22) involves questioning by Chairman Julian E. Jones Jr., who scolded Madigan for leaving county employees “terrified” of her investigations.

Bevins did not respond to an email from The Brew requesting comment.