The Columbia-based company denied zoning permission for a residential substance abuse center on Harford Road is opening a smaller facility for women in West Baltimore.

“This will save lives,” declared Bilal Ali, director of CMDS residential programs and a former 41st District legislator. “There are very few treatment facilities for women sick and dying from opioid and fentanyl addiction.”

Mosby’s wife, State’s Attorney Marilyn Mosby, was scheduled to tour the facility and speak about the importance of drug treatment, but bowed out at the last minute. 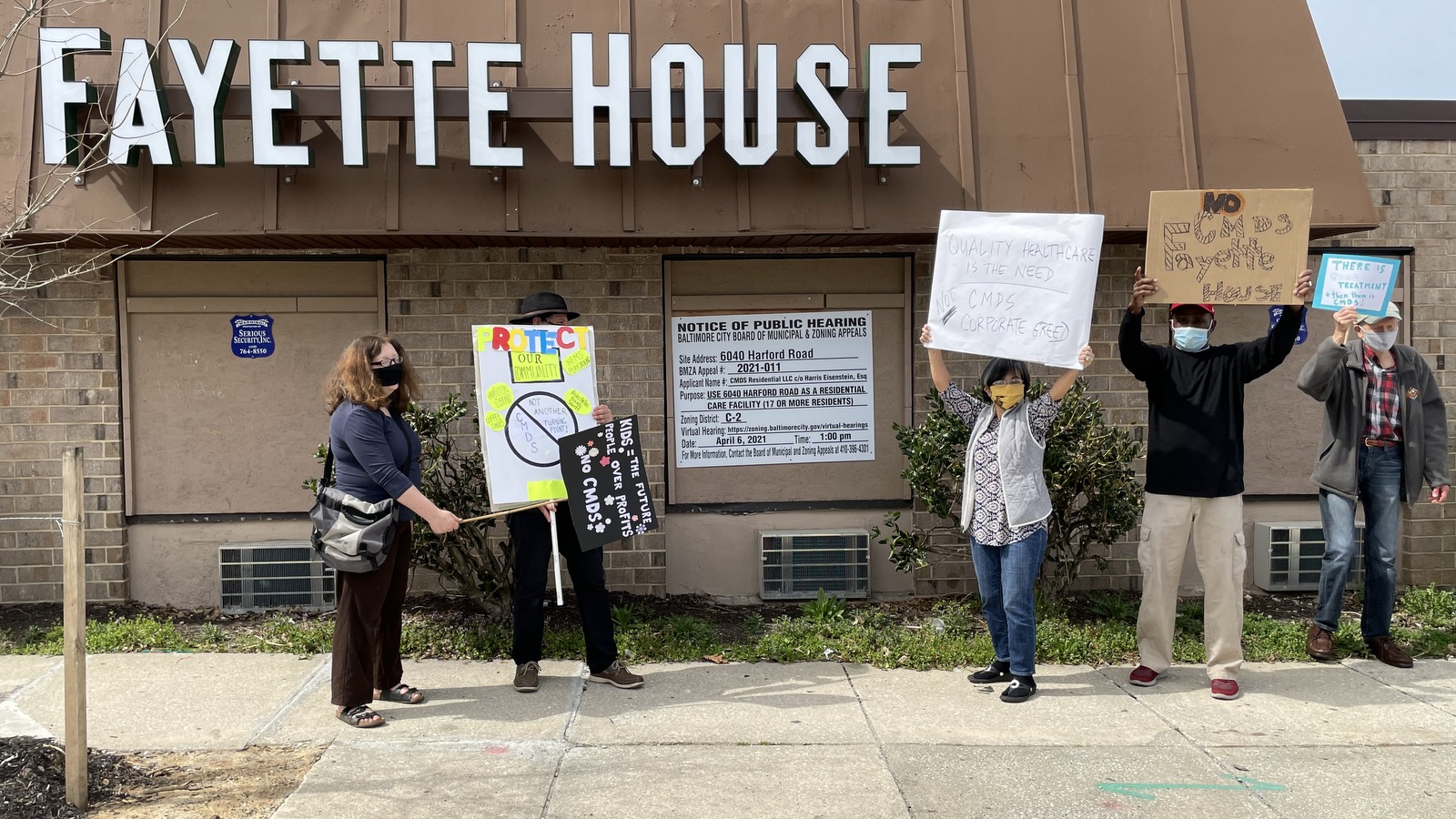 Some Hamilton residents protest outside the Fayette House on Harford Road last March. The inpatient clinic was recently denied zoning approval and has not opened. (Fern Shen)

The two treatment facilities are both named Fayette House, but the use permit for a 136-bed building at 6040 Harford Road was denied by the Board of Municipal and Zoning Appeals earlier this month.

The board said CMDS could not use the building permit of the previous owner, who ran an assisted living and adult day care facility, to establish an inpatient drug treatment center.

The change of use requires the approval of the City Council.

Kevin Pfeffer, founder of CMDS, which provides services for Turning Point, the East Baltimore methadone clinic often described as the nation’s largest, reiterated at the open house what he told The Brew last week – that he will not seek a Council ordinance, but instead plans to sue the city for “an illegal and astoundingly stupid decision” to deny CMDS’ zoning request.

Pfeffer said his company has been the victim of “a lie spread by those who want to destroy us” that it planned to open a methadone clinic at the Harford Road site.

(Critics argue that, outside of the zoning issues, the proposed clinic is located too close to an elementary school and doesn’t provide enough qualified staff, including a psychiatrist on staff, to ensure proper care of patients.)

Pfeffer pointed out that the present C-2 zoning for the Harford Road address does permit a methadone clinic.

If the Maryland legislature legalizes safe sites to inject drugs in the future, “we’re going to put one there,” he vowed yesterday.

In January, a three-judge federal appeals panel ruled that the clinic violated a 1986 federal law known as the “crack house” statute and could not operate. 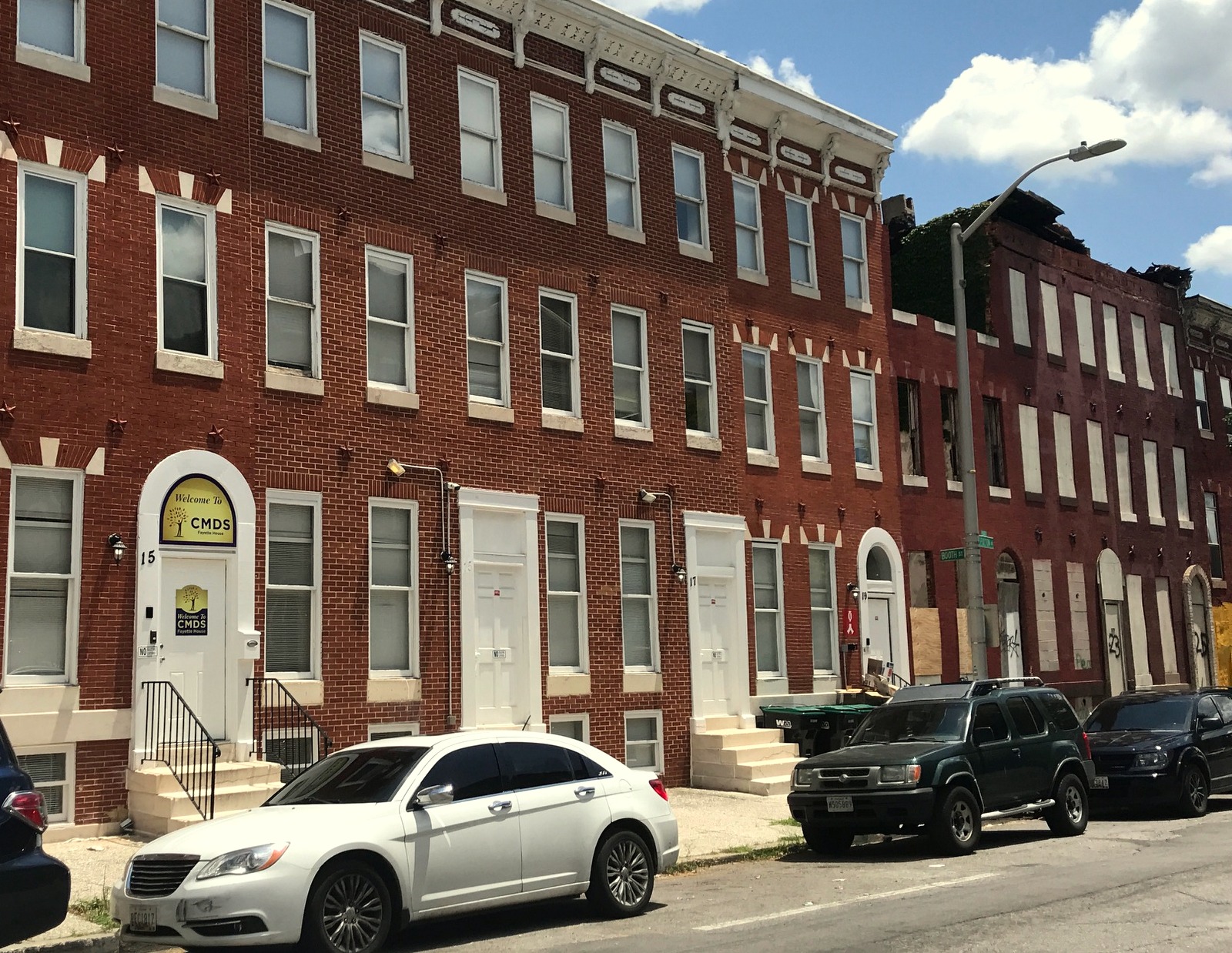 The 56-bed women’s facility is located in four rowhouses on the unit block of South Fulton Avenue. (Mark Reutter)

He pointed to the 954 drug overdose deaths recorded in the city last year, nearly three times the number of homicides. “This is the forgotten epidemic that has taken a back seat to the Covid crisis,” Ali said.

This is especially true for women, said Sidney Ford, who ran a drop-in center on West Pratt Street, You Are Never Alone (YANA), to help sex workers and other vulnerable women.

She attended the open house to show solidarity, saying, “Women are invisible. When they fall into addiction, they don’t act out, but tend to become depressed. I have seen so many women full of potential who have died alone.”

Ali said the clinic, which markets itself as a dual diagnosis (substance abuse and mental health) facility, will start taking clients this week on a first-come, first-served basis.

“You don’t have to be insured,” he said, “and it’s not just for Baltimore City. It’s open to anyone who is willing to get help and stop using.”

Pfeffer said CMDS has acquired more buildings on South Fulton Avenue in anticipation of opening a transition center for women. Calling parking at the site inadequate, he said the company plans to tear down two buildings it owns behind the clinic for off-street parking.