Baltimore City Solicitor Jim Shea is the chairman of the Inspector General Advisory Board. He had an opportunity this week to assure residents that he would not be a party to the attempt by some City Hall politicians to neutralize the effectiveness of the IG.

He chose not to do so. Instead, he heightened fears of a concerted effort by some elements in city government to weaken the IG’s ability to root out waste and corruption.

The problematic composition of the board – it consists of a majority of city employees appointed by elected officials whose offices are under the IG’s jurisdiction and may be subject to an investigation – is hardwired into a 2018 City Charter amendment. Shea’s dubious plan of action will make those conflicts of interest that much more troublesome.

He added that he plans to conduct a review of Cumming’s performance through a “deep dive” of data collection about “what the job is and how the job has been accomplished.”

I believe that Shea is wrong about the board’s proper role. Very wrong.

First of all, the board is an advisory body, not an oversight or supervisory panel. It does have the power to appoint the inspector general and remove the inspector for cause, giving it implicit authority to investigate complaints that the IG is guilty of “misconduct in office, persistent failure to perform the duties of office, or conduct prejudicial to the proper administration of justice.”

But beyond that limited role, there is no reason for the board to take fishing expeditions into the particulars of investigations. Indeed, it should keep its nose out of those investigations absent specific, credible allegations of wrongdoing by the IG.

The city charter places supervision of the office in the hands of the IG, not the advisory board. (See below.) “Best practices” recommended by the Association of Inspectors General and instituted by IG offices around the country confirm the importance of non-interference. 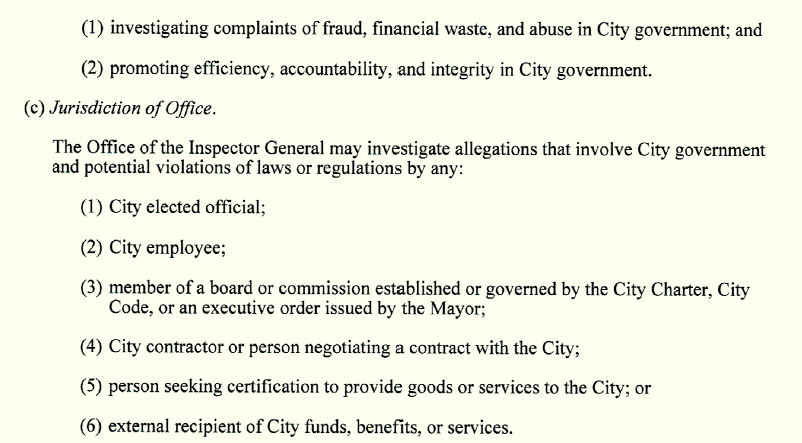 The first sentence of the 2018 Council resolution that placed the charter amendment establishing the OIG on the ballot stated that the purpose was to create “an independent Office of the Inspector General headed by an Inspector General.”

City voters approved the charter amendment by an 83% margin. Perhaps Shea believes that “independent” meant an office supervised by politicians and their appointees. I am fairly certain that city voters did not.

The City Charter does not contemplate a “deep dive” into OIG investigations and operations.

The charter requires the board to meet “at least once annually to review the performance of the Inspector General.” That review should be based on the customary metrics of number of cases opened and closed, outcomes, dispositions, etc. The requirement clearly does not contemplate a “deep dive” into agency investigations and operations.

On the state level, the State Prosecutor Selection and Disabilities Commission has a role similar to the IG advisory board, including the power to remove the state prosecutor on the same basis that the IG may be removed.

The commission, however, does not examine the details of cases investigated by the state prosecutor because that is not its role.

In short, Shea is acting as though the biggest problem in the city is a dysfunctional IG.

His approach is remarkably similar to the attempt by several politicians in Baltimore County to muzzle its inspector general, Kelly Madigan, through a board of appointed overseers.

That effort, highlighted by a bill proposed by County Executive Johnny Olszewski Jr., was denounced for good reason by the Association of Inspectors General. A public outcry forced Olszewski to withdraw the bill.

Last year, she reported identifying poor practices and identifiable waste that amounted to a potential $7 million in savings for Baltimore taxpayers. The exaggerated focus on Cumming’s performance would be laughable if not so ominous.

Shea, however, apparently took less offense at the appointments to the board by City Council President Nick Mosby.

They already have stated their support for Shea’s aggressive approach, with Middleton opining at the end of Tuesday’s meeting, “I agree completely with everything that’s been said today.” 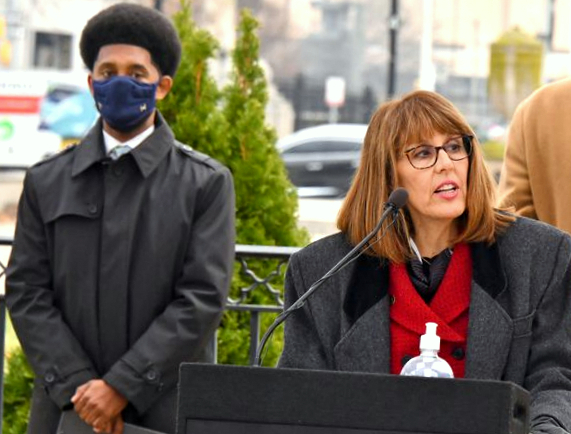 Mosby appointed Costello to replace Councilman Ryan Dorsey on the board. Dorsey was the primary sponsor of the 2018 charter amendment and a strong proponent of an independent IG. Did Mosby see Dorsey as an obstacle?

Even by Mosby standards, it was a crass political move. Yet neither Shea nor his boss, Mayor Brandon Scott, said a thing about it.

Honest and thorough IG investigations threaten the status quo – and there are politicians and others who will stop at almost nothing to preserve that status quo.

This fight is about whether the IG will remain an effective counterweight to the waste, fraud and corruption that plagues Baltimore government.

• David A. Plymyer retired as Anne Arundel County Attorney in 2014 after 32 years in the county law office. He can be reached at dplymyer@comcast.net and on Twitter at @dplymyer.