A Columbia-based company denied a permit to open a residential substance abuse treatment facility on Harford Road has sued the city, saying it bowed to pressure from community opponents who waged a “secret aggressive campaign” against the center.

The city’s actions, culminating in last month’s decision by the Board of Municipal and Zoning Appeals (BMZA) that Clinic Management and Development Services (CMDS) lacked a necessary building permit, are unconstitutional and discriminatory, the suit contends.

“The BMZA’s misguided and convoluted interpretation of the city’s zoning code was mere pretext for its deference to the discriminatory attitudes of community members,” the 46-page complaint, filed in U.S. District Court, argues.

Accusing the city of reacting to criticism “based on bias, fears and prejudice against people with disabilities,” the company alleges denial of federal and state equal protection and due process rights, as well as violation of the Americans with Disabilities Act (ADA).

“Expanded treatment capacity is sorely needed in Baltimore City, which has been described by its own Health Department as one of the epicenters of the deadliest drug epidemic in American history,” the lawsuit states.

Filed on behalf of CMDS Residential by attorneys Harris W. Eisenstein and Lauren M. McClarney of Rosenberg Martin Greenberg, the lawsuit asks the court to vacate the zoning board’s previous decision and grant the permit.

After last month’s decision, which said the company would need to seek conditional use approval by the City Council, CMDS founder and CEO Kevin Pfeffer told The Brew he would take city officials to court.

That decision came after an April 6 hearing in which lawyers for both sides made arguments, and area residents raised a host of issues.

They expressed concern about the project’s proximity to homes and a school, the reputation of its affiliated Turning Point methadone clinic in East Baltimore, and whether people would receive appropriate care at the facility located at 6040 Harford Road.

Community members, including the Westfield Neighborhood Improvement Association, participated in protests outside the northeast Baltimore facility, which the company is calling Fayette House. 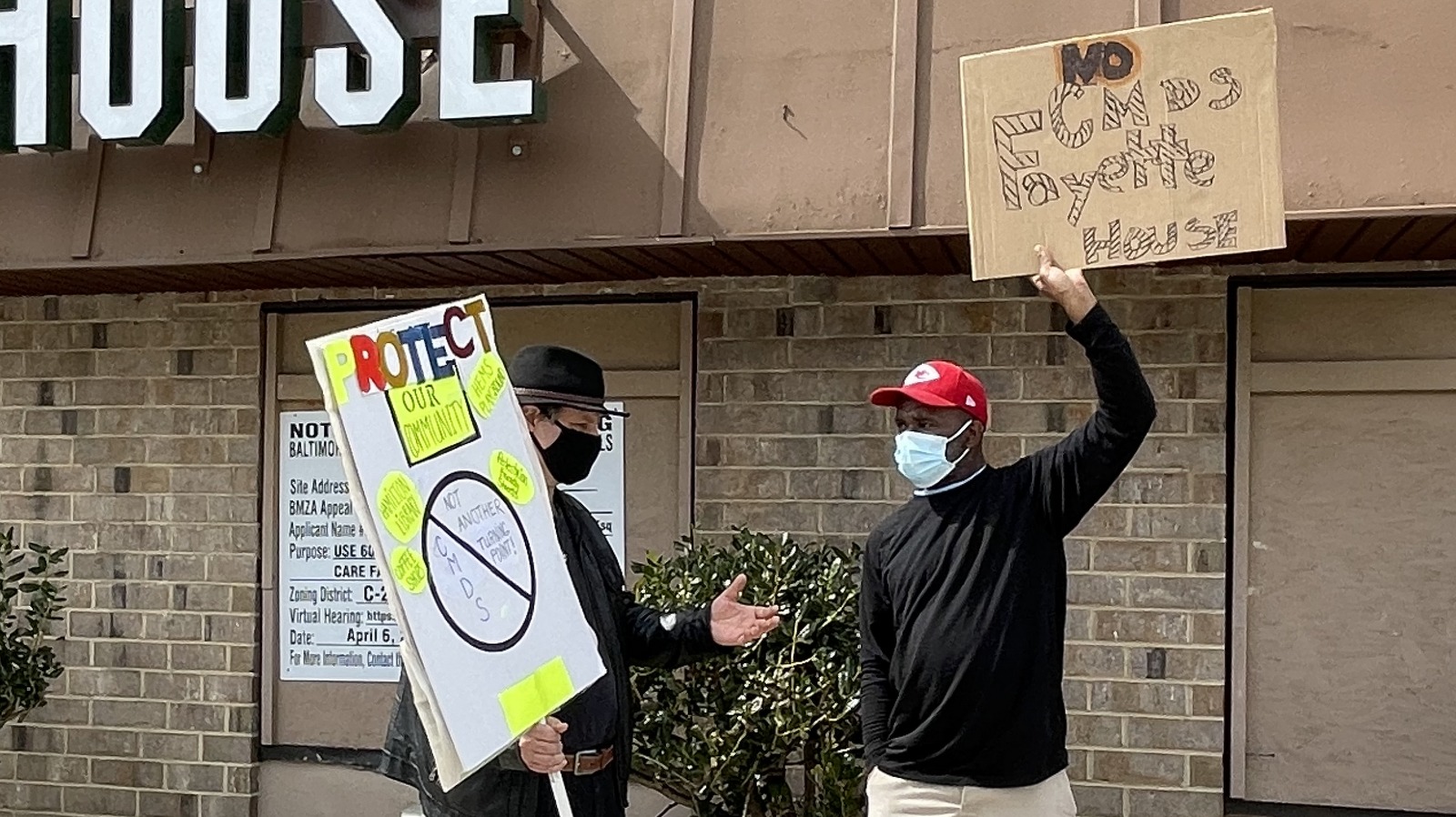 Residents from Hamilton and other neighborhoods hold a protest against opening the CMDS clinic on Harford Road last March. (Fern Shen)

The suit argues that the objections from residents prompted Zoning Administrator Geoffrey Veale to renege on a previous assurance to CMDS that its plan to repurpose the existing building into a residential substance abuse treatment facility was permissible.

Saying it relied on a letter from Veale, CMDS acquired the property for $1.7 million, obtained a building permit and spent $2.5 million on building upgrades, the suit states.

In subsequently denying CMDS’ request for a permit, Veale “not only flouted his own prior representations. . . he also ignored longstanding city practice and well established law,” according to the complaint.

“It is common practice for developers and others acquiring real estate in Baltimore City, like CMDS, to seek confirmation from the Baltimore City Zoning Administrator that its planned use comports with applicable law,” the suit says.

The complaint also faults the BMZA for denying the company’s appeal.

Although the building had been granted a building permit for an assisted living and adult day care facility under prior ownership, CMDS was seeking a 136-bed residential substance abuse treatment facility.

“Once a change, alteration, etc., occurs, new conditional use approval is required,” the BMZA ruled.

CMDS maintains that its proposal represents simply an “intensification” of the current use that it is permitted under the 2017 Transform Baltimore zoning rewrite.

It also contends that officials handled the project differently from similar requests by other applicants because of political sensitivity and discrimination.

Both Veale and the BMZA would have given the company the permissions it sought “but for the perverse bias, unreasonable fears and irrational prejudice against recovering addicts expressed by certain community members,” the suit claims.