The chair of a group cited by the Downtown Partnership of Baltimore (DPOB) as a community association that was consulted about its controversial digital billboard initiative says the money he received from the Partnership poses no ethical problem.

Paul Sturm said he was paid by DPOB to organize three information sessions about the billboard plan for downtown residents.

“Downtown Partnership hired me as an individual. It had nothing to do with the Network,” he said, referring to the Downtown Residents Advisory Network (DRAN) that he organized.

Asked if his contractual relationship with DPOB taints his standing as the chair of an ostensibly grassroots organization, Sturm said, “Absolutely not. These are two separate things.”

“I’m an individual who, like all of us, needs income to pay rent and living expenses,” he explained in an interview with The Brew yesterday.

Sturm declined to disclose the dollar amount of his contract, referring a reporter to the Downtown Partnership, which refused to say what Sturm was paid.

“Like all of our vendor contracts, the financial details are confidential,” said Shelonda Stokes, DPOB president and CEO, in an email to The Brew.

Public participation, or the lack of it, became a point of contention in the run-up to the City Council’s passage of the Area of Special Sign Control.

The Central City Residents Association expressed concern that billboards might be a traffic hazard, unsightly and a health risk. But its attempt to slow down the bill’s passage was brushed aside by the Baltimore Planning Commission and then fast-tracked by City Council President Nick Mosby.

Sturm said his positive comments about billboards (“great to see forward-thinking by Baltimore’s leaders. . . I love Times Square”) made in social media discussions, were his personal opinion and predated his Partnership contract.

What about Sturm’s November 1 letter, published in the Baltimore Sun in response to an op-ed critical of the Downtown Partnership’s billboard plan?

This, too, was misconstrued, he said. “I was objecting to the framing in the piece. I wasn’t ‘rising to the defense’ of the Downtown Partnership.” 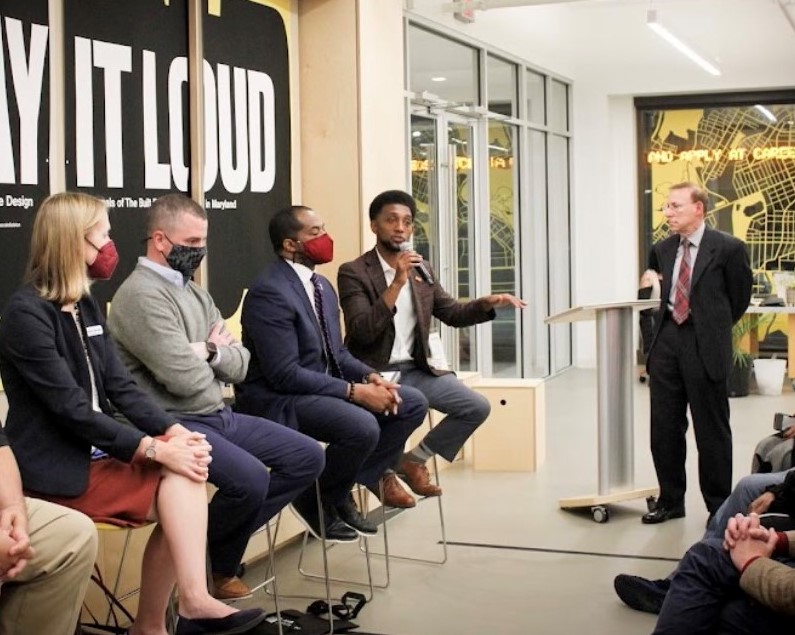 In a written statement, Downtown Partnership’s Stokes said, “Paul was hired because he is an experienced organizer and a longtime downtown resident of 14 years, who cares deeply for the heart of the city and actively engages with several organizations.”

Sturm said he started DRAN about a year ago for the purpose of influencing public policies impacting the lives of downtown Baltimore residents.

DRAN is not listed in state records as a corporation or nonprofit. It has no website and has no elected officers.

Asked how many members the group has, he cited its social media presence, noting “we have about 50 Facebook followers and 60 Twitter followers.”

DRAN is not listed in state records as a corporation or nonprofit. It has no website and has no elected officers.

Asked if the Downtown Partnership was behind DRAN’s formation, Sturm repeated that DPOB, which receives city funds to improve downtown trash pick-ups and and enhance public safety, “had nothing to do with creating the Network.”

Stokes also said the Partnership was not involved in the formation of Sturm’s group, but did pay Sturm personally “to manage a downtown resident’s voter registration drive.”

She said he was not paid for his group’s co-hosting of a Thursday night meet-and-greet with Mayor Brandon Scott and other city and state elected officials.