A onetime candidate for Baltimore City Council has been indicted for falsely obtaining $1.6 million in Paycheck Protection Program (PPP) and other Covid-19 relief loans, which she used for plastic surgery, home renovations and other personal expenses.

She allegedly made false statements in applications for federal relief money, including that her businesses each employed between five and 14 people and had gross revenues of up to $1.3 million.

While some of the applications were turned down, she obtained more than $1 million in bank loans during first round of relief funding.

She subsequently filed additional PPP “Second Draw” applications, seeking $818,750 and actually receiving $676,250, according to the indictment.

All but one of her companies had no employees, and the one allegedly employing three people – One Stop For Services LLC – never filed federal withholding taxes, the indictment said.

Rather than using the loans for allowable business expenses, Henson diverted some of the money for personal uses such as “plastic surgery, renovations to a relative’s home, renovations to her personal living spaces, car payments and other unauthorized expenses,” according to Maryland U.S. Attorney Erek L. Barron.

In addition, the government found more than $600,000 held at M&T Bank accounts in the names of various companies.

If convicted, she faces a maximum sentence of 30 years in prison for each of 12 counts of bank fraud and a maximum of five years for each of six counts of making false statements.

A widely known figure in northeast Baltimore, Henson operated Your Friendly Tax Preparation, a storefront business on the 3200 block of Belair Road.

She briefly ran as a Democratic candidate in the 3rd Council District in 2019 before withdrawing. (The feds found $120,044 in alleged relief funds in an M&T account under the name of Nichelle Henson Campaign LLC.)

Before dropping out of the race, she was asked at a candidate forum, “Tell us who you are and why you’re running.”

“I’ve been community advocating for the community for over 10 years, just making sure I help my community,”  she said, according to a Brew article. 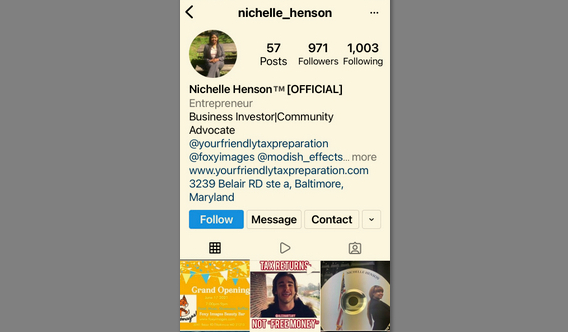 Nichelle Henson wears many hats – as an entrepreneur, business investor and community advocate with a trademarked name, according to her Instagram page.