William “Chris” McCollum, who continued to collect a six-figure salary after he resigned from Baltimore County in the wake of a corruption investigation, has been taken off the payroll, the Baltimore County Executive says.

“As of May 18, the person in question was no longer paid by the county, and his health insurance was discontinued,” Erica Palmisano, press secretary for Johnny Olszewski, told The Brew today.

Known for his ties to past and present county executives, Council members and other political figures, McCollum was faulted by Inspector General Kelly Madigan for wasteful spending and the unauthorized use of a county credit card during his tenure as director of the county’s Ag Center.

After months of controversy last year, Olszewski’s office told The Brew that McCollum would resign, effective July 2, from his $137,000-a-year job as deputy director of the Department of Economic and Workforce Development.

McCollum did stop coming to work, but he continued to get his full salary by utilizing his “earned sick leave” under a special agreement with the Olszewski administration.

That leave time – amounting to over 150 days before Fox45 disclosed the arrangement – allowed McCollum to pick up an extra $110,226.92 as of last month. It also meant that McCollum, 51, passed the 20 years of service threshold in March, allowing him to receive future retirement benefits without penalty.

‘We’ll Pay You Until You Get a Job’

Palmisano would not say why the county decided to remove McCollum from the payroll – he still had available sick time – saying it was a confidential personnel matter. Based on his salary schedule, McCollum collected about $120,000 between his July 2 resignation and his May 18 termination.

UPDATE: Asked to comment, McCollum gave the following statement tonight: “You guys have gotten so much demonstratively wrong in the stories about me that I will pass. Thank you for asking.“

Palmisano did release, under a Maryland Public Information Act (MPIA) request by The Brew, correspondence between County Attorney James R. Benjamin and McCollum regarding his sick leave arrangement.

On March 1, Benjamin summed up the original agreement, writing to McCollum:

“As part of your decision to separate from Baltimore County government last summer, because you did not have other options for health care coverage at the time of your separation, it was agreed that the County would allow you to utilize your accrued sick leave to continue your health care coverage until you found other employment.”

But, Benjamin continued, having learned “that you are employed with 2844 Hudson LLC and/or Lee’s Restaurant Group as the director of operations, the County is inclined to end your health coverage.”

The letter concluded, “If there are any documents or materials you wish to share with the County to show that you are not currently employed, please provide such information to my office for the County’s review and consideration on or before March 11, 2022. Otherwise, the County will proceed forward with terminating your health coverage.”

What then ensued was a series of back-and-forth emails in which McCollum asserted that he was never employed by the restaurant group, but had “lent my time” to the group “to help with some projects and permitting issues they are pursing.”

Calling his title of director of operations “just a formality in submitting the permits or working on events,” McCollum told Benjamin that “Baltimore County will be among the first to know when I secure new employment.”

“Hopefully,” he concluded  in one letter, “this will be a non-issue in the future.” 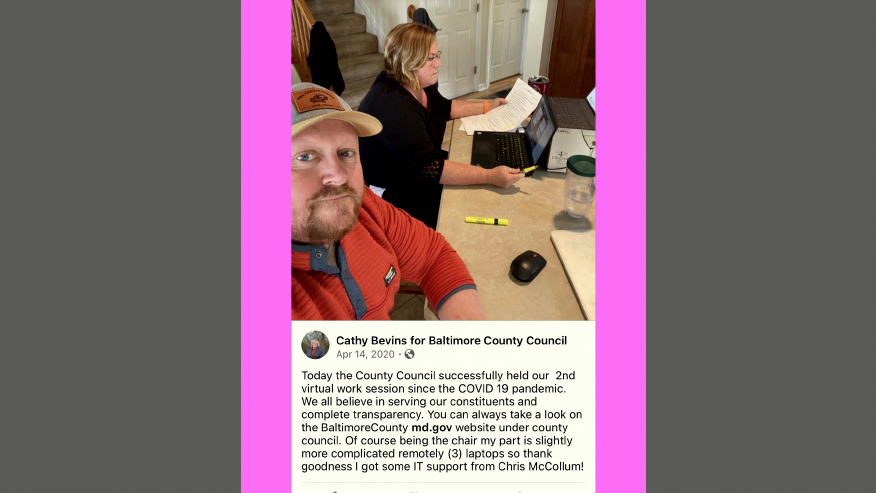 Councilwoman Cathy Bevin says, “thank goodness I got some IT support from Chris McCollum” during her chairmanship of the County Council in 2020. (Twitter)

But Benjamin persisted, calling on McCollum to present tax documents and any 1099 forms “reflecting any compensation/income you have received since your departure from Baltimore County government.” The deadline: April 22.

McCollum characterized the request as “harassing in nature” with an “unreasonable” timeline.

“I simply agreed to the stipulations of the separation as you proposed,” he wrote, complaining that the inspector general investigation had “caused significant harm for me moving forward.

“Plain and simple,” he continued, “this is an issue made by a policy of this administration that various senior officials of this administration have admitted in public and in direct private conversations with me was poorly conceived and constructed. However, I am suffering the consequences of those decisions.”

“I am suffering the consequences” – Chris McCollum on the IG investigation.

This was followed by another email from McCollum – three days after the April 25 deadline had passed – telling Benjamin, “I’m literally leaving my house as I type and I don’t have copies of the 1099’s available.”

He said he was headed on a trip where “I will have extremely limited email, cell and internet.”

However, he said he would be willing to sign an affidavit that he was not an employee of any company and did not have access to other employer-provided health care. His 2021 tax return, he said, would reflect an “income of approximately $4,000” from sources other than the county.

Benjamin told McCollum to produce the tax documents as well as a sworn affidavit by May 11.

It is unclear whether McCollum did that because the correspondence provided by the county ends on April 29.