A second health survey in the wake of Baltimore magazine’s “Best of Baltimore” party that sickened some attendees was sent out today – listing the Atlas Restaurant Group establishments left out of the first survey.

These establishments were left off the initial survey that allowed attendees to indicate whose food they ate at the August 18 multi-vendor event at the American Visionary Art Museum.

They were the only restaurants, among the nearly two dozen providing food, owned by the prominent Baltimore-based chain.

“Dear Best of Baltimore Attendee,” the email from the Maryland Department of Health (MDH) began.

“It was brought to our attention that a few vendors and food items were omitted from our initial survey,” the email continued. “As a result, we are sending an addendum survey. Please consider completing as it will assist with our investigation.”

Both the magazine and state health officials queried yesterday by The Brew sidestepped the question of why Atlas was not included in the survey to try to determine the origin of suspected tainted food.

Attendees who fell ill and were surprised to find only a partial list of food vendors on the first survey also had questioned the magazine and MDH about the omission.

Less than a day after The Brew published a story about the incomplete survey, a new version of the survey was sent out.

“The only change with this second survey is they added the Atlas restaurants,” said Cristina Layana, who was stricken with severe diarrhea. cramps and chills after attending the party with her husband and friends, who all developed similar symptoms.

“It’s pretty funny how they omitted just this one company in the first place,” said Layana, who recovered within a few days, but whose husband remains ill two weeks later.

“He’s a little better, but still pretty green,” she said of her husband. “He can’t eat normal food – just toast and bland things. I tried giving him mashed potatoes and chicken and peas, and he got bad cramps.” 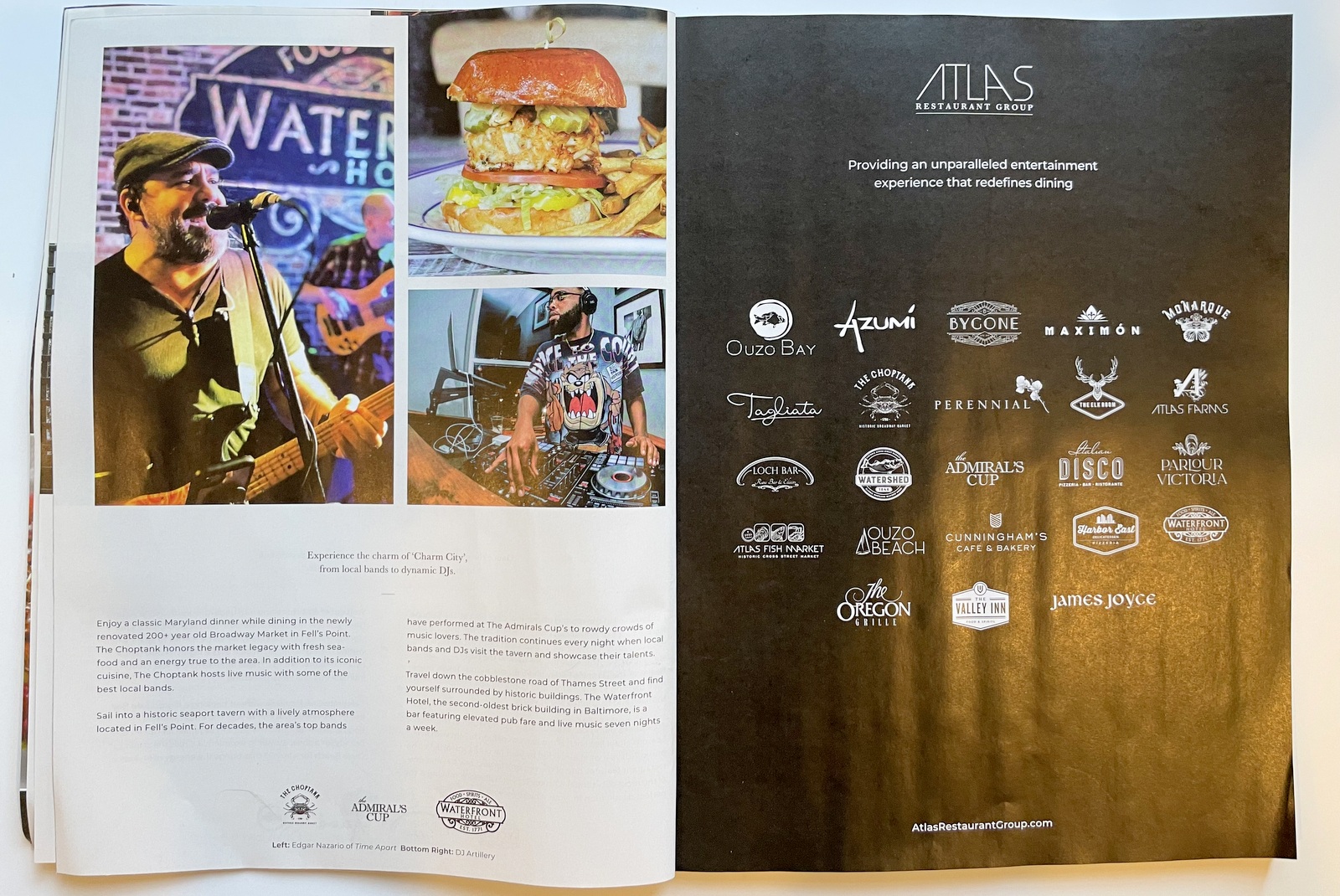 Part of the six-page advertising spread by the Atlas Restaurant Group in the current Baltimore magazine.

Today, a new wrinkle developed for the couple, who ate food from the Atlas and other establishments represented at the party.

Even though her husband was the sicker of the two, he was unable to open the link to the second survey.

“I purchased the tickets so I am the only one getting emails about this,” she wrote to MDH. “But he came with me and got sick.”

No official cause of the outbreak has been released by state officials. Asked if the issuing of two different surveys would skew results or hamper the investigation, MDH’s Cook said that was “not a concern.”

“We are gathering data and continuing to support the Baltimore City Health Department” in the investigation, he said.
_____________________
• To reach a reporter: editors@baltimorebrew.com

“. . . While many of those who posted understood the complexity of this situation, some — including one local media outlet — erroneously suggested that certain restaurants were intentionally left off the survey.

The survey’s goal is to determine what food was consumed, and as previously mentioned, we weren’t immediately able to provide information on all the dishes that were served. Due to the time sensitivity of the matter, the Department of Health sent the survey with the information they had in hand. We can assure you that no restaurant was left off for any other reason. While we were not in control of what was included in their survey or when it was sent, I know they are doing the best they can just like we are. They care about the health and well-being of those affected in the same way that we do. In fact, we just received notice this morning that the Department of Health sent a supplemental survey to include a few restaurants they did not have complete information on initially.”