In June 2018, the Board of Estimates awarded a large ambulance contract to Hart to Heart Transportation Services after hearing its low prices touted by then-city purchasing agent, Erin Sher Smyth.

“The deciding factor was the lower pricing submitted by Hart to Heart,” she said.

Smyth went on to criticize the current ambulance carrier, Transdev, and dismiss as irrelevant a whistleblower’s lawsuit against Hart to Heart that eventually resulted in the company paying $1.25 million to settle charges of overbilling Medicaid for unnecessary ambulance trips.

Six months later – or just days before the contract was to go into effect – Smyth heard from Hart to Heart’s founder and CEO, Jason Skidmore.

Skidmore had emailed Smyth, asking her to revise the ambulance rates that the BOE had approved due to “significant decreases in quantities” of projected ambulance rides for indigent clients.

In other words, he was worried that his company wouldn’t be able to make a profit on his low bid.

The email was striking in several ways. City purchasing rules generally require a 45-day notice before any proposed price change can be considered.

And if “material modifications or amendments” are agreed to by the contractor and purchasing office, those changes are to be “approved by the BOE, if necessary,” the rules say.

The “if necessary” ambiguity did not apply to this particular contract. Instead, bid documents specifically stated that the “unit rates” for ambulance rides “shall remain firm” and not subject to price escalation until the initial contract period ended in June 2023. 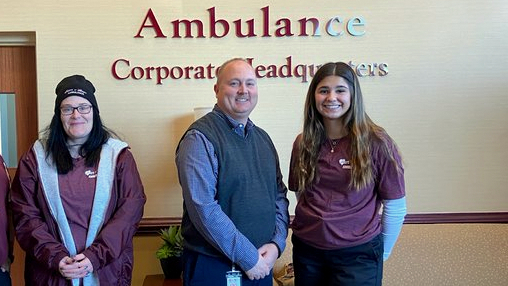 Nevertheless, three days later – on the eve of the January 1, 2019 start date – Smyth revised the rates for transport covered by the Medicaid Transportation Grants Program.

The new rates were what Skidmore wanted, and they included the following:

Smyth’s single-page reworking of the rates on official city stationary – with no copies sent to the Board of Estimates or to her superiors in the Finance Department – enabled Hart to Heart to pocket $3,543,056 in extra fees between January 2019 and May 2022.

Projecting those prices forward, the city is likely to pay another $1.6 million extra under the revised rates by the time the contract expires next year.

So much for those low prices. 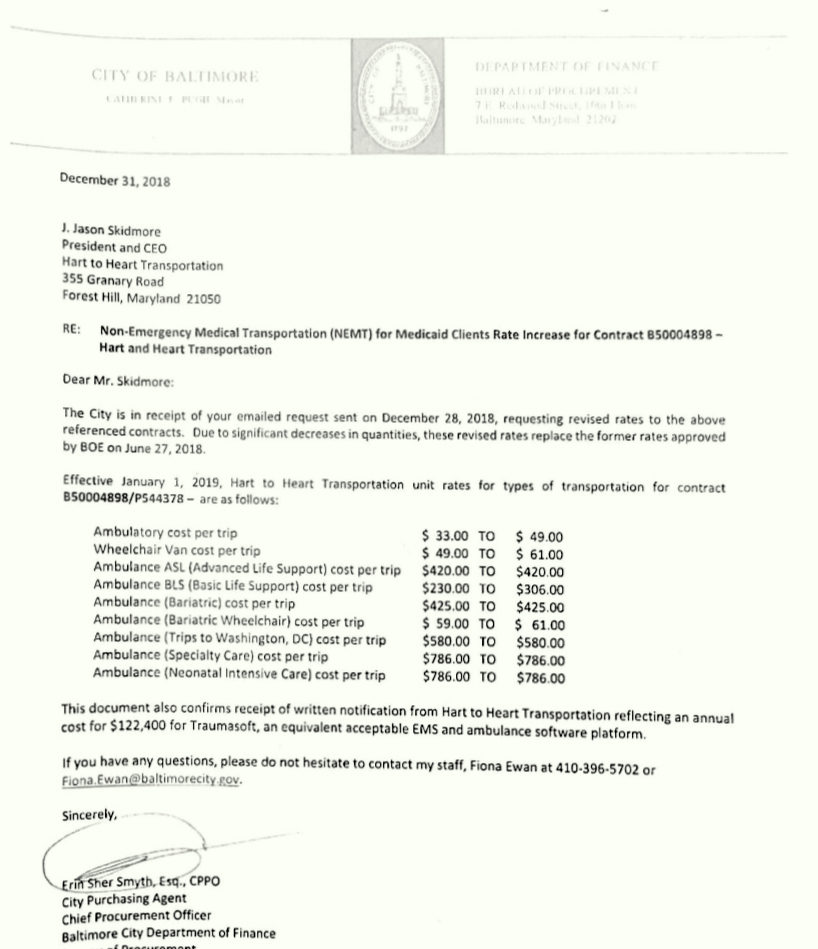 The December 31, 2018 letter signed by Erin Sher Smyth that sharply increased ambulance rates and included a yearly software fee of $122,400.

Cumming’s two-page report did not name the parties involved in the price revisions. Nor did the report include the above letter, obtained by The Brew through sources outside of City Hall.

(The city has not yet responded to The Brew’s Public Information Act request for the letter and related contract correspondence.)

Sources say Smyth kept the ambulance price changes “carefully guarded” for months until the Baltimore Health Department, which administered the transport program, realized it was getting higher invoices from Hart to Heart than the BOE-approved rates.

So what did the agency do?

Her report faults agency executives for their “blind acceptance” of Hart to Heart’s invoices and additionally blasts the “former city purchasing director” for failing to confirm that the fee was legitimate.

That arrangement has netted the company an extra $5,865 a month since January 2019, the report says.

Attempts to reach Hart to Heart’s Skidmore about the contract and the IG report have been unsuccessful.

The company did not respond to an email request for comment, and Skidmore was reported “out of the office” yesterday. 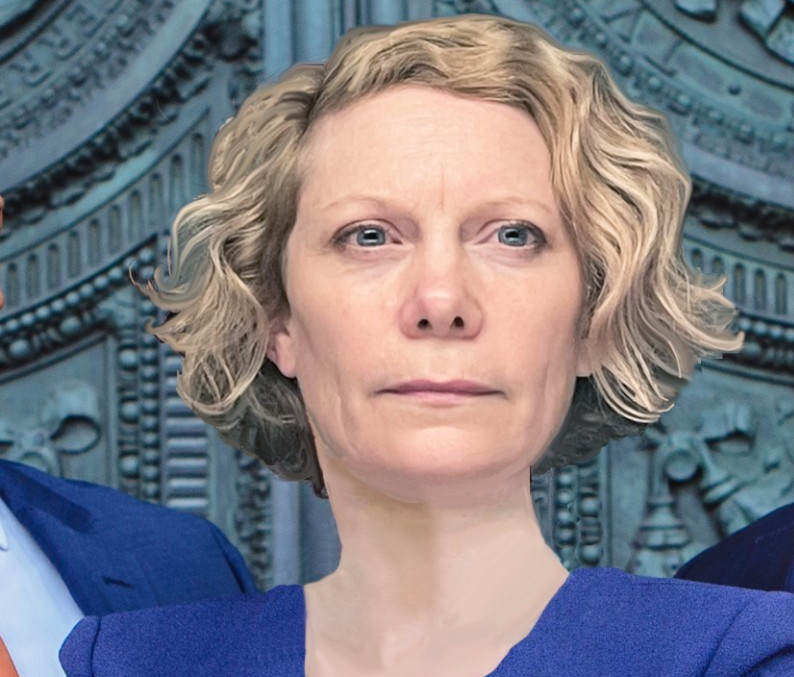 Erin Smyth is listed on her LinkedIn page as a government contracts attorney and procurement professional.

Back on the City Payroll

Smyth also declined to comment on the report or to speak to The Brew.

She was transferred to the mayor’s office before resigning in 2021, shortly before it was disclosed that she had been involved in “a very large oversight” regarding a parking garage contract that would cost the city $7.5 million in unanticipated management fees.

Mayor Brandon Scott and the Board of Estimates twice gave its stamp of approval to Smyth’s contract with the sheriff’s office.

Sam Cogen, Baltimore’s newly elected sheriff, says he is now reviewing all personnel contracts in the office, including Smyth’s.

“We’ll address her role when we’re aware of what her role is,” Cogen told The Brew last month. 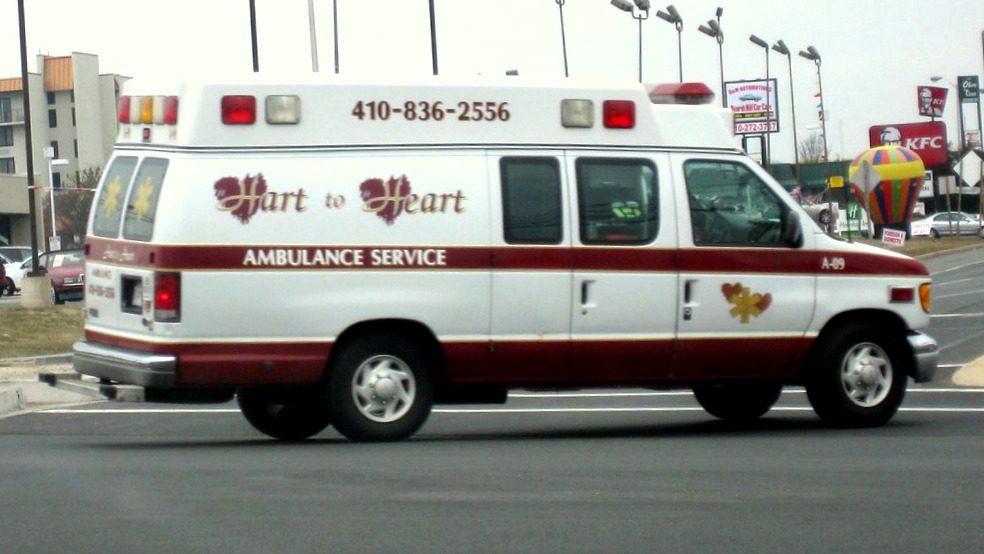 Below are some of the non-emergency medical transport services that the Baltimore Health Department contracts out to Hart to Heart. 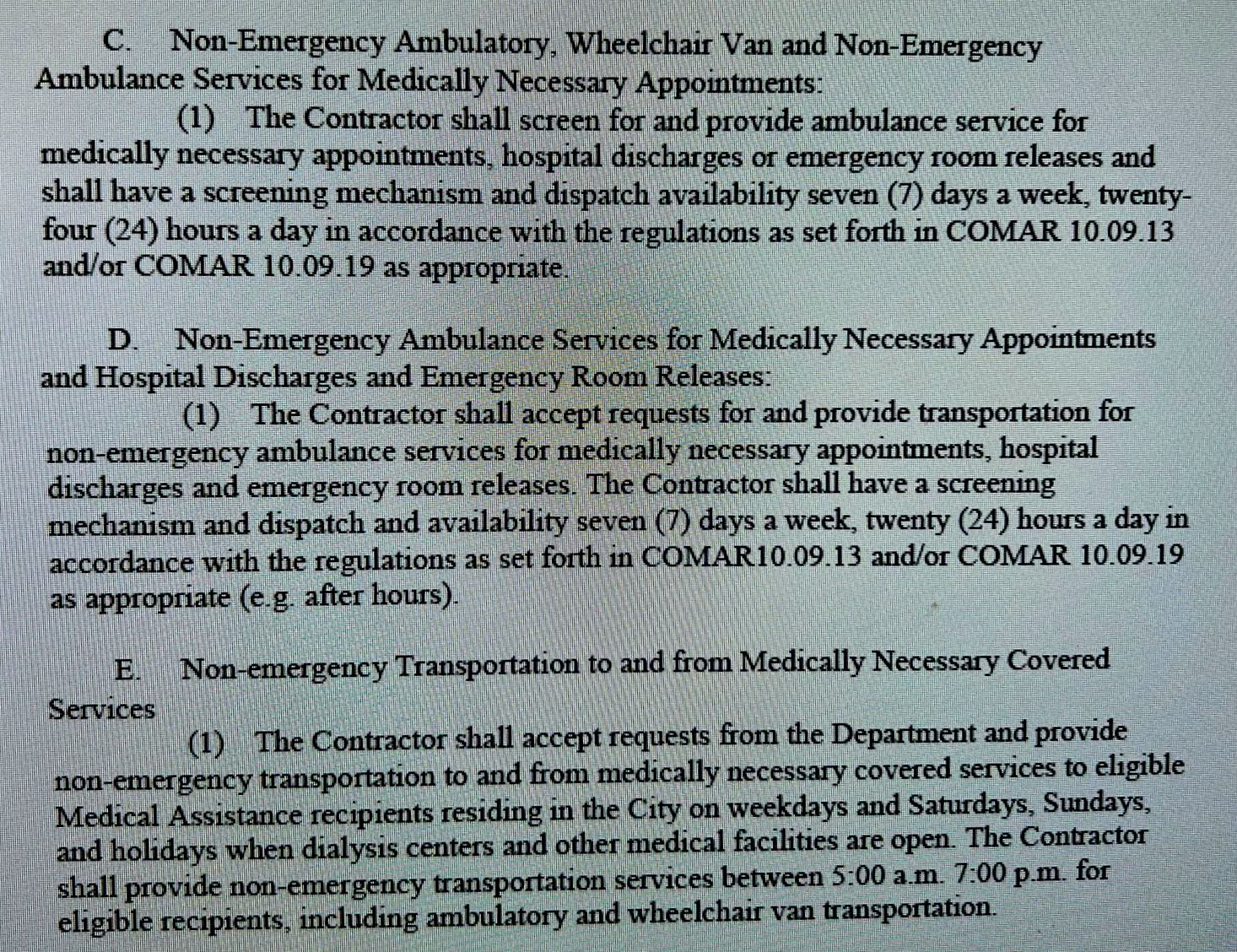