A West Baltimore bike lane created in May that prompted howls from local neighborhood groups is being quietly removed. But as news has leaked out, the bicycle community is howling right back.

Why scrap the half-mile of bike lane created from one of the two vehicular lanes on Monroe Street, a southbound one-way street which cuts through the communities below Mondawmin Mall?

Brewer speculates that the confusion may be because the lane is poorly signed and that “there’s too much [car] traffic to go from two lanes to one.”

Anger in the community arose, he said, because nobody was ever warned or educated about the change. “We were shocked. The city Department of Transportation (DOT) came in and did what they wanted to do without consulting us.” 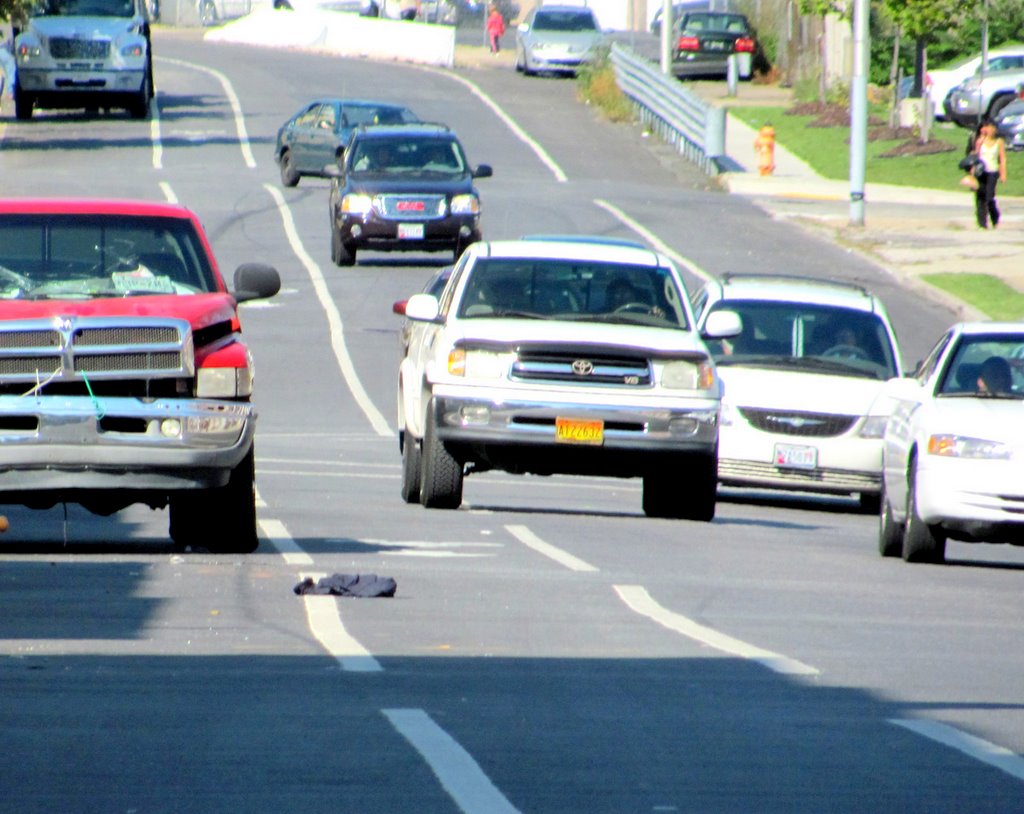 Some area residents complain that vehicles are driving in the new lane intended for cyclists. (Fern Shen)

Meanwhile safety is precisely the reason that bicycle advocates say the lane should be left in place.

“I’m very sorry that this change occurred without their input. I do, however, feel that the city needs to rectify the situation properly,” said Penny Troutner, interim chair of the Mayor’s Bicycle Advisory Committee.

“Making a situation unsafe for people who are just trying to live and work in this city is not the proper way to handle this.”

Nate Evans, the city’s bike and pedestrian planner, still seems to be reeling from the community-cyclist dust-up that had DOT spokesperson Adrienne Barnes, in a conference call with The Brew, apologizing profusely.

Were “community folks” not routinely consulted when other bike lanes were established in Baltimore? “We haven’t had a whole lot of flack in a lot of neighborhoods,” Evans said. “The main difference here was actually converting a vehicular lane into a bike lane.”

Adding a political layer, the City Council has been drawn into the bike lane dust-up.

Councilwoman Belinda K. Conaway took up the cause of bike lane opponents after they sought her help. (These included Dr. Franklin Lance, president of the Greater Mondawmin Coordinating Council, as well as Brewer.)

“They would never go into another community and treat them this way,” said Conaway, who is running for relection as a write-in candidate in the 7th District. “The community is very up in arms.” 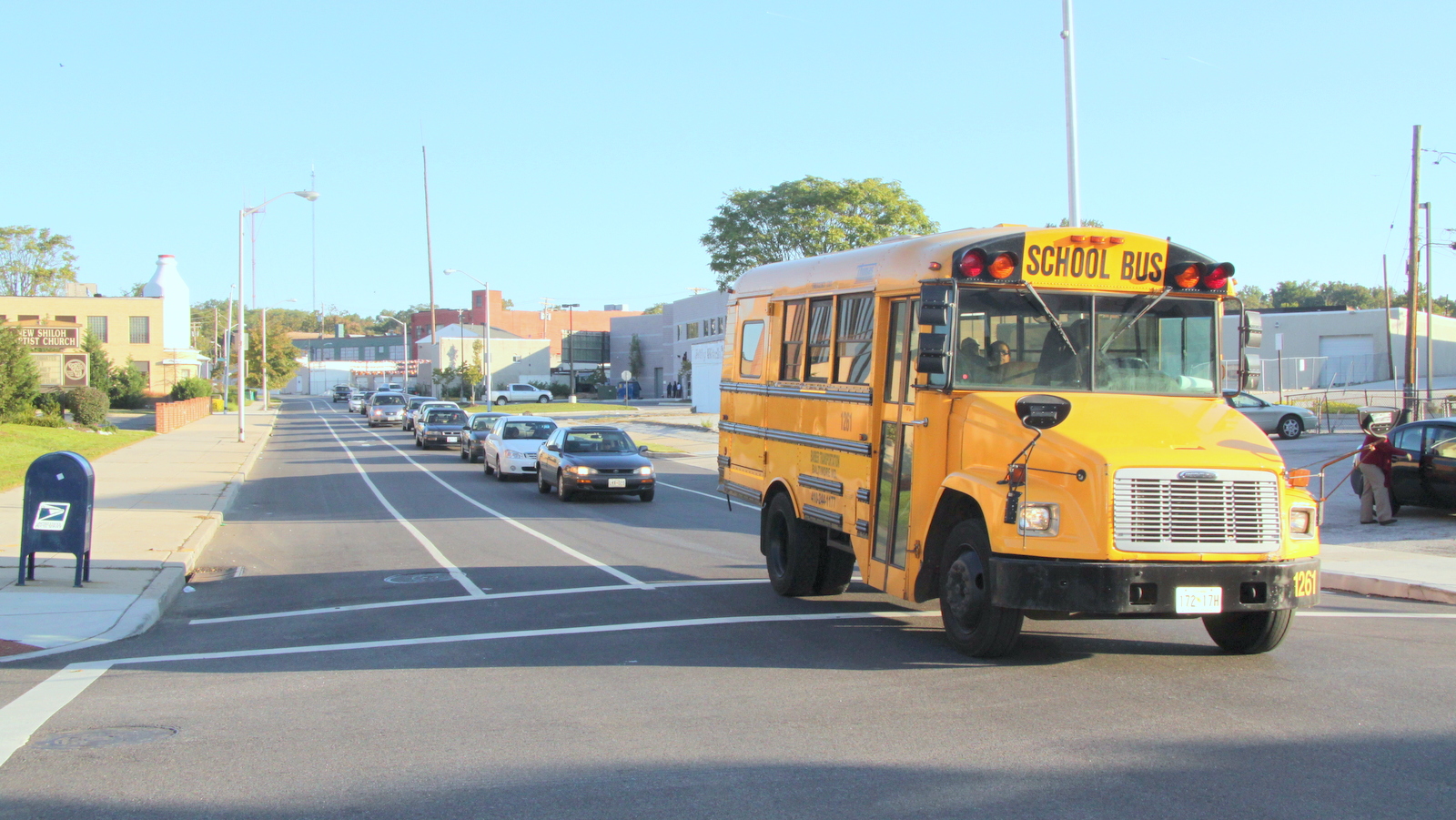 Conaway has been pushing the issue lately because she said the community expected, after DOT officials met with them, that the lane would have been removed by now. “They feel like the city is reneging.”

Away from the world of emails and City Hall politics, the issue seems less polarized. The bike lane begins at Gwynns Falls Parkway and ends about nine blocks (about half a mile) later at North Avenue.

Channeled into one lane, the cars there were a bit backed up during morning rush hour and some could be seen bypassing the back-up by zipping over to the right and into the bike lane. There were “sharrows” on the road surface but little else marked the new lane.

On a followup afternoon visit, the traffic was light. We heard mixed reaction from residents along the street and bicyclists. One reaction was shared by all.

“Why does it just stop?” said Robert Wynder, a bicyclist who was commuting back home to Bentalou Street from his workplace off 41st Street near I-83.

Wynder began cycling for his health over the summer and has been using the bike lane regularly. He said he’s had some near misses with cars coming into the lane. But he said the part of Monroe below North, where it returns to two lanes of vehicle traffic, is the “hairy” part.

Another cyclist, Herman Powers, 66, had a similar point of view. “It helps a great deal,” Powers said of the bike lane. Living around the corner on North Ave., Powers uses the bike lane several times a day.

“It would be better if it went a little more bit down the street, but it’s a good thing.”

Powers, who has a car but prefers to bike, praised the city’s bike lane program and said he’d be  disappointed if the city started removing any bike lanes. “These lanes give more respect for cyclists. And that’s what’s lacking now, respect and courtesy, between cars and cyclists.” 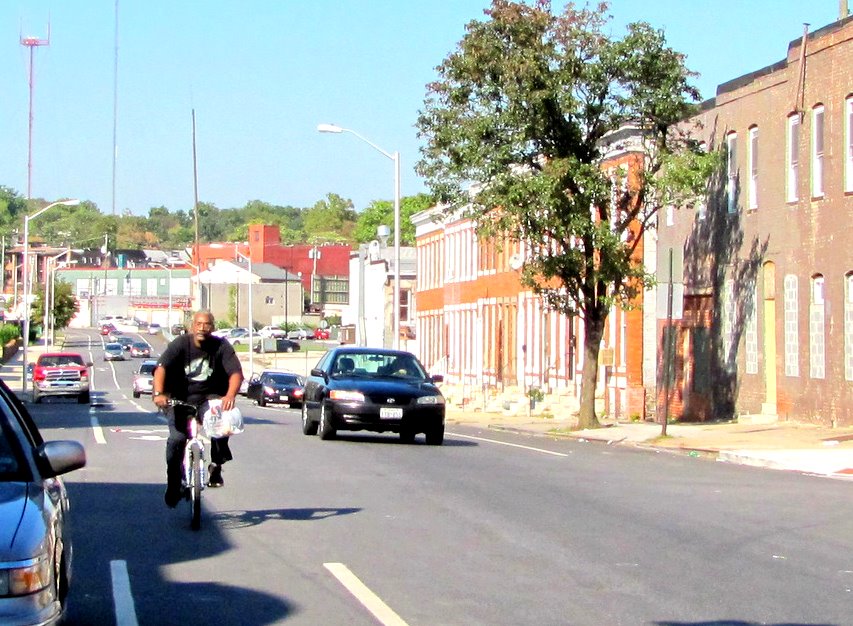 Robert Wynder commutes from his home on Bentalu St. to his job off 41st St. near I-83. (Fern Shen)

Leroy Jackson, who lives on Monroe St., disagreed, saying the lane increased the conflict between cyclists and cars.

“It’s hard for cars to get through. So some cars just blow past it [the bike lane], especially at rush hour.”

“What’s the purpose of a bike lane for a few blocks?” he asked. “You cause too much confusion. They should have made it longer. It should go the whole way down Monroe, not just stop at North Ave. I think it being this short, they should just take it out.”

As longtime Monroe St. resident Terri Lynn sees it, Monroe is just “not a bicyclist route.”

“We don’t have a college here. We don’t have any major businesses. So there’s not many bicyclists for this neighborhood,” she said. She complained that the city put in the bike lane without any community notice: “Nobody ever said anything about it until one day it appeared.”

Asked whether the bike lane is being removed because it was ill-conceived or because interactions with the community were mishandled, Barnes says, “It was more about the safety issue.”

But that wasn’t what DOT director Khaliel Zaied wrote to Conaway in a June 15 email. He defended the bike lane, saying it would curb pollution and calm traffic, and that it could be done safely.

His email said: “As you may know, the City is on an aggressive push to add more bike lanes around the City. Baltimore is a non-attainment area for Ozone Air Pollution – encouraging citizens to ride bicycles will help the City comply with Federal Air Quality standards. Bicycling is also a popular recreational activity. Most major Cities have well developed on-street bicycle and greenway trail networks, including Philadelphia, Chicago, Seattle and Washington, D.C.

“As part of each street resurfacing project, DOT’s bicycle planner and Chief Traffic Engineer review the street to determine if there is sufficient room to safely install a bike lane without major adverse traffic impacts. For Monroe Street north of North Avenue, it was determined that the traffic volumes allow us to reduce the # of travel lanes. This should also help to calm the speed of traffic, which we have also received requests to work on in this area.”

The idea that the bike lane could theoretically be a boon to the community is something even the neighborhood leaders acknowledge.

“We might have embraced it if we had been consulted,” said Brewer.