Baltimore bike advocates had been cheered by the news: city transportation officials had called a meeting – scheduled for today – to discuss a West Baltimore bike lane they previously had said was going to be removed in response to community complaints and intervention by a City Council member.

“I made time in my day,” said Penny Troutner, owner of Light Street Cycles and interim chair of the Mayor’s Bicycle Advisory Committee. “I found an employee to cover for me.”

Troutner said she thought there might be some compromise on the matter once she and other members of the Baltimore cycling community sat down with city officials and with the people who had complained about the lane – Franklin Lance, president of the Greater Mondawmin Coordinating Council (GMCC), and City Councilwoman Belinda Conaway (7th), who was intervening at Lance’s request.

“They might even see that leaving the lane [on Monroe Street] could make the community more safe, not less,” Troutner said.

But then city officials hastily informed the bike advocates and The Brew that the meeting was canceled.

Now the cyclists are feeling like second-class citizens, according to Troutner and others.

The misbegotten meeting is just one of many bumps in the road for the half-mile bike lane on Monroe created last May when the portion of Monroe (between Gwynns Falls Parkway and North Avenue) was being resurfaced. One of two southbound traffic lanes had been converted to a bike lane.

Community groups, most prominently the Greater Mondawmin Coordinating Council, complained that they had been given no notice of the new traffic pattern and that they considered it unsafe.

When the lane was not removed promptly, community leaders complained that the city had “reneged” on a promise.

That’s when Conaway, who is mounting a write-in campaign in the Nov. 8 general election to retain her council seat, joined in the push to remove the lane.

Bicycle advocates got up in arms, enflamed by famously anti-Conaway blogger Adam Meister.

“Before we make the move”

So now how did today’s meeting come to be canceled, adding a new chapter to the saga?

According to emails obtained by The Brew, on Monday (the day this website published “Battle over a bike lane”), city DOT director Khalil A. Zaied sent a short email to his chief of Transportation Development and Planning, Theo Ngongang.

“Theo, please set a meeting ASAP to discuss this issue before we make the move and I would like for you to invite Paul, Dr. Franklin Lance, the two councilwoman, and all copied here including myself.”

What had changed by late in the week, when bike advocates were getting texts from DOT officials saying the meeting was canceled?

DOT spokeswoman Adrienne Barnes had little information to offer today. She repeated that the meeting had been canceled. When pressed, she said the city is restoring the traffic lane, “the community is satisfied” and the meeting is therefore unnecessary. 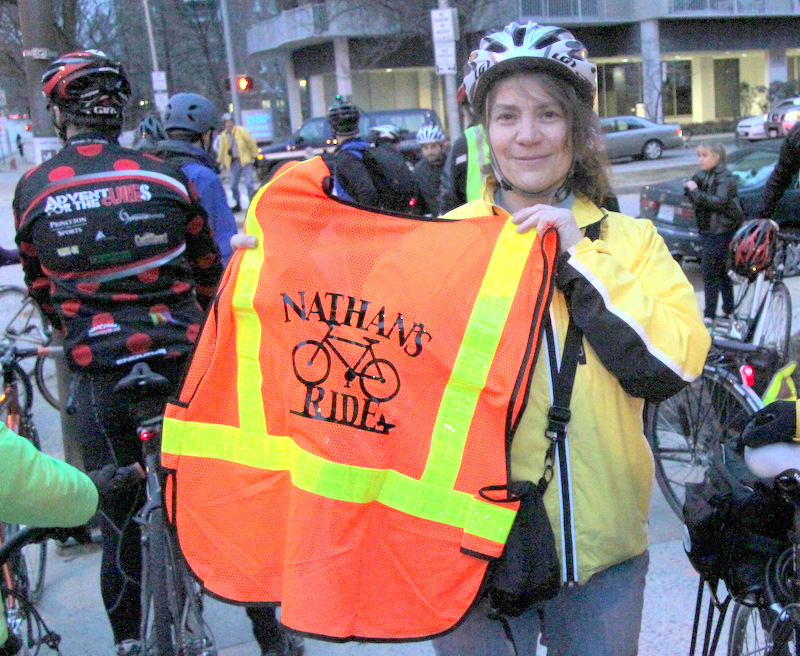 Penny Troutner, during a February ride in honor of a bicyclist fatally injured on a city bike lane. (Fern Shen)

Asked to explain why cyclists weren’t consulted about the meeting cancellation – and whether Lance and Conaway had refused to attend, as sources told The Brew – she asked this reporter to submit questions in writing.

Conaway did not return phone calls today, but Lance confirmed that he did decline to attend the meeting, and explained why in an email.

“The city was asked the purpose of the meeting and responded by saying to discuss the lane on Monroe Street. I responded by saying the Monroe Street lane was not for discussion. My community already voiced their concerns and DOT already agreed to remove the lane. I then said if the purpose would be to discuss other places in Greater Mondawmin for a bike lane I would attend.”

Lance went on to say that he would be willing to talk about other locations.

“My community’s request is simple: restore Monroe Street and let’s jointly look for a better place in Greater Mondawmin. We are not anti-bikes. That stretch of Monroe Street is not a good place for one.”

Troutner said the city’s decision to cancel the meeting was “really unfortunate” and a blow to city cyclists.

“We need to exchange our different points of view, Dr. Lance and I and the cyclists and the community,” she said. “The city really fell down on the job by not making that conversation happen today.”