At a City Hall press conference, the mayor framed the issue as a matter of not having “proper documentation” for $9.5 million in federal stimulus grants awarded to the city in 2009 to help the homeless.

Yesterday, it was disclosed by The Sun and The Brew that the U.S. Department of Housing and Urban Development (HUD) is requiring the city to reimburse $3.76 million in grant money.

The Brew has obtained a copy of HUD’s order. So far, neither HUD nor the mayor’s office has released the document, which details the city’s failure to keep track of expenses by homeless providers and to vouch for the eligibility of clients.

“HUD is not alleging any fraud or abuse,” the mayor said at the media event. “Nor are they questioning our commitment for serving our homeless individuals.”

The mayor insisted that the city “did spend these funds helping the homeless,” but “we found it difficult to provide the proper guidance to our allies,” meaning the groups who handed out the funds.

The HUD investigation reported a complete absence of documentation of $393,000 by the now-defunct Prisoner’s Aid Association and $336,000 by the Public Justice Center. 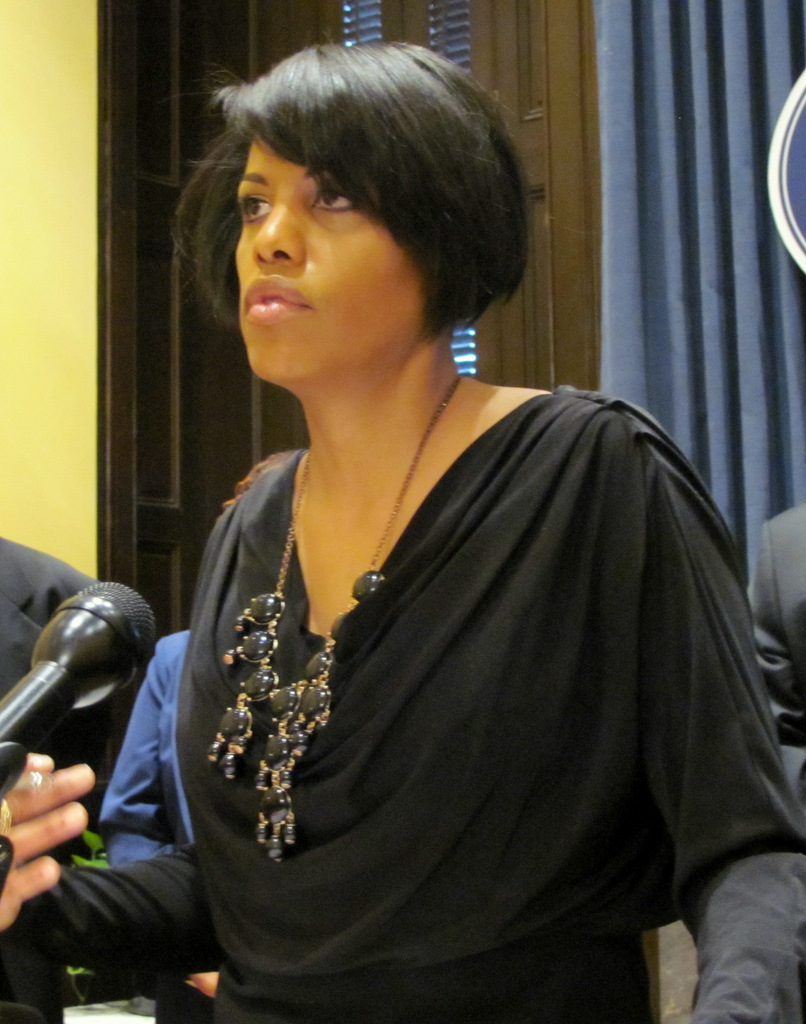 Mayor Rawlings-Blake said she was proud of the work accomplished with the stimulus funds. (Photo by Mark Reutter)

The agency faulted eight other providers with deficiencies in record-keeping, which the providers argued resulted from the city’s failure to tell them what documentation was needed.

The mayor today conceded that point by saying, “We found it difficult to provide the proper guidance to our allies [the providers].”

She went on to criticize the federal government for dispensing the stimulus funds far too quickly, calling the process “like building an airplane while you were flying.”

Three homeless providers said the program was of great help to the homeless. John Schiavone, president and CEO of St. Vincent de Paul, said the federal funds helped his group find housing for over 115 families.

Cecily Franklin was presented as one of the recipients. “Programs like this take place and really help you,” she said. “I had to come to the shelter to stay for six months. I wasn’t working. Thankfully, I have since attained employment and am still at that same job and it’s been two years.

“My children are fine and in school. They helped me pay for my home for six months, which was great and it helped me to get on my feet.”

Of the $980,409 in stimulus funds awarded to St. Vincent de Paul, the HUD report says it will require repayment of $466,912 for undocumented financial assistance to homeless clients, $33,242 for an ineligible cost billed under “services,” and $23,075 for not properly documented administrative costs.

Spokesmen for two other homeless providers spoke of the benefits of the program today – Adam Schneider of Health Care for the Homeless and Bill McCarthy, executive director of Associated Catholic Charities.

Both groups were reviewed by HUD and were given a clean bill of health.

Asking for Repayment is “Atrocious”

Without his organization’s stimulus grant of $1,042,000, McCarthy said that some 116 homeless families would probably not have been housed during the Great Recession.

“Remember that we were in crisis – a crisis in humanity and a crisis in our economy at the time these dollars were issued to be deployed,” he said.

“The fact that in hindsight, through an audit, that documentation wasn’t in place for some of the families and individuals that were housed really misses the point. And the fact that the city would be asked to repay $3.7 million of funds that were properly deployed to house homeless people is just atrocious.

“This money,” McCarthy continued, “could be used to continue the great work that the mayor and my colleagues and partners are doing in order to end homelessness in Baltimore.”