One of the oft-stated  priorities of Baltimore’s new mayor, Catherine Pugh, is to find a long-term solution for the 3,000-plus people who sleep on the streets every night.

Of more immediate concern – underscored by the discovery of a homeless man found dead in sub-freezing temperatures in front of City Hall on Saturday – is how to provide shelter to a population that often shuns the city’s central homeless facility, the Weinberg Housing and Resource Center, saying it is dangerous and unwelcoming.

Under the Rawlings-Blake administration, $750,000 was allocated for emergency beds this winter, to be made available when temperatures fall below freezing.

It is a complicated system with different temperatures triggering different responses from different agencies.

Officials from the Mayor’s Office of Human Services have not returned The Brew’s request for information about how the program works or may evolve in the new administration.

But according to information available on the agency’s website, the city pledges to provide 100-plus emergency beds through its current shelter program when temperatures drop below 32 degrees.

Their program requires homeless persons to register at the Weinberg Center and be given a bed either at the facility or be bused to an overflow shelter.

A second program kicks in when temperatures fall to 13 degrees wind chill or lower.

This is when Health Commissioner Leana Wen can declare “Code Blue,” which calls on a panoply of agencies, including housing, health, emergency management, fire and police, to provide outreach, referrals, inspections and other services to “vulnerable populations” coping with the cold. (The full Code Blue Plan for 2016-17 can be accessed here.)

As one of those “vulnerable populations” (others include children, seniors and families without home heating), homeless persons are to be taken from the street to the Maryland Center for Veterans Education and Training based in the Jonestown neighborhood.

MCVET is supposed to provide beds for 30 men and 30 women regardless of their veteran status, according to the 2016-17 Code Blue plan posted on the website. “The outreach worker will have to call ahead of time to make a placement and will accompany the client into the facility,” the plan says.

If these beds fill up, additional shelter for adult males will be provided at Baltimore Station and the Helping Up Mission. Adult women will be offered beds at the New Vision House of Hope and, if they are fleeing from domestic violence, at the House of Ruth.

Meanwhile, homeless children under 18 can find shelter at Loving Arms, according to the plan. 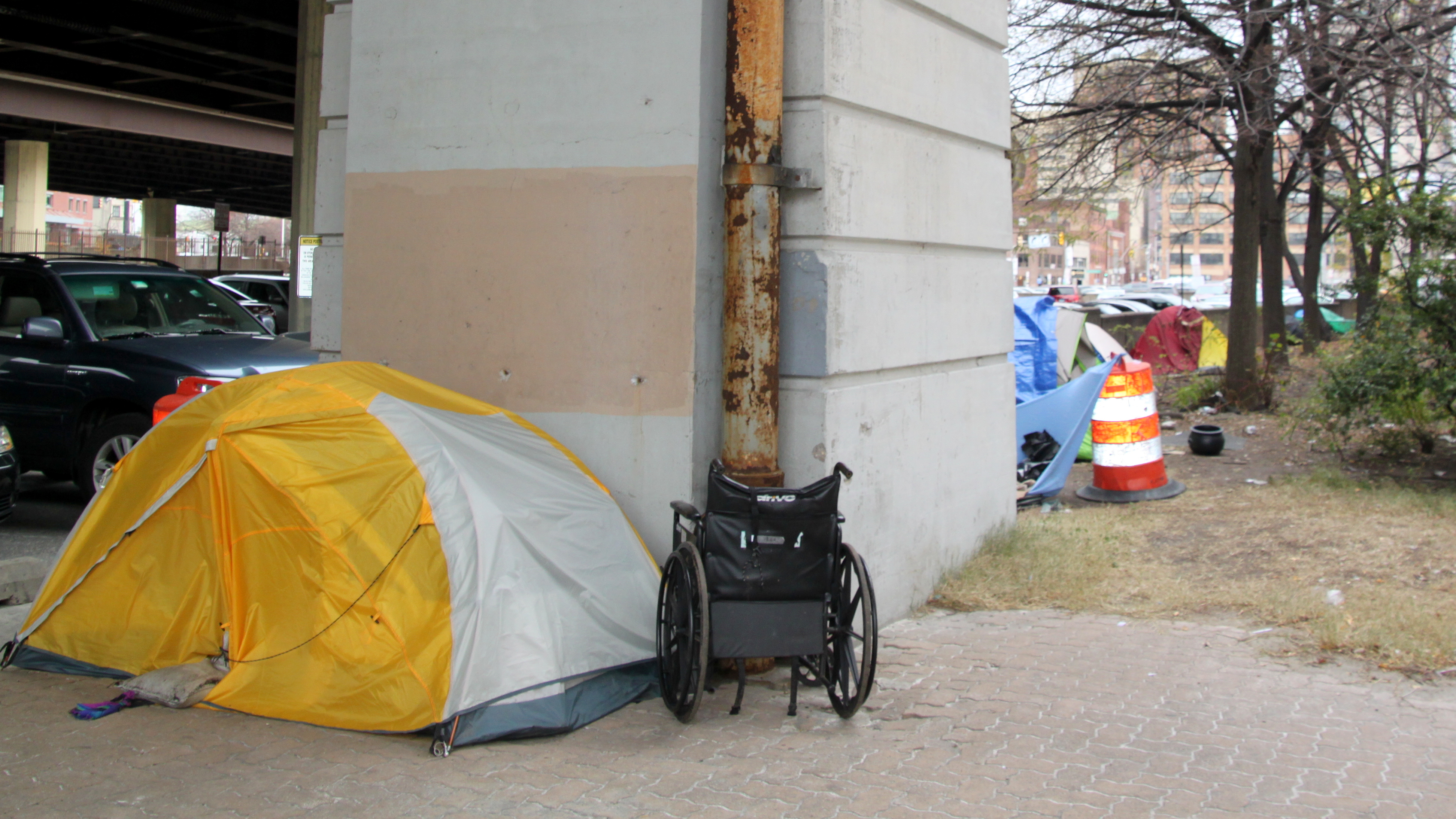 A line of tents under the Jones Falls Expressway where people sleep near City Hall. (Fern Shen)

In all, 100 emergency beds, on top of the 100 beds provided under the 32 degree trigger, will be made available.

“And if there is a need, there are a bunch of [other] buildings we could open up,” said an official with knowledge of the shelter program. In the past, the city has made space in the War Memorial Building available to the homeless.

The following statement from Mayor Pugh was released tonight to The Brew:

“I extend my deepest sympathy to all who knew and were associated with Lawrence Alexander, who passed away this weekend due to exposure to the elements. Today I learned that our Winter Shelter Plan is in place and, although I am still gathering information about the terrible death of Mr. Alexander, my priority is to ensure the city is doing all that it can to accommodate anyone who needs shelter and that no one falls through the cracks.”
_________________________________________

Just hours after police removed Alexander’s body on Saturday, the new mayor spoke across the street at the War Memorial Building to hundreds of participants in an Open Society Institute summit on setting priorities for the city.

“What the city need is bold leadership,” Pugh told the audience. “Someone who will pull the trigger on things that aren’t working and say, ‘Just because we did it this way doesn’t mean we have to continue to do it that way.’”

One thing that is not working now, says Antonia Fasanelli, executive director of the Homeless Persons Representation Project, is the temperature system used by the city.

“We’ve got to do away with these artificial trigger points,” she told The Brew, noting that any temperature below freezing is potentially serious to a homeless person, especially one with preexisting health issues.

Mayor Pugh has set up a transition team to study low-income housing and other ways to help the homeless. Fasanelli said her group is looking forward to “hearing from Mayor Pugh and finding out what her plans are to increase affordable housing in Baltimore.”

At Saturday’s forum, shelter provider Christina Flowers directly addressed the issue of cold weather, saying the city needs to be proactive immediately. “A state of emergency exists for our homeless population,” she said.

Activist Lauren Siegel, of Housing Our Neighbors, said she hopes Pugh seizes the opportunity to tackle one of the city’s toughest problems.