After 10 days of leading a remarkable homeless person’s protest – a 30-tent encampment in front of Baltimore’s City Hall – organizer Kenneth Gwee was asked yesterday what the protesters were getting in return for leaving.

“There’s a renewed sense of energy from the city to make sure all of the residents of Tent City get housing,” said Gwee, president of the Southern Christian Leadership Conference, as 55 people headed off in vans for the shelter.

After discussions with Mayor Catherine Pugh, the encampment dwellers had agreed to go to a former city school building in West Baltimore to be housed for two weeks and “assessed” for possible subsequent housing and services.

But it was not clear what, if anything, Pugh has agreed to from the group’s “racial equity benefits agreement,” a sweeping list of requests around jobs, expungement of low-level offenses, lead paint removal, a “housing first” approach to homelessness, and more. 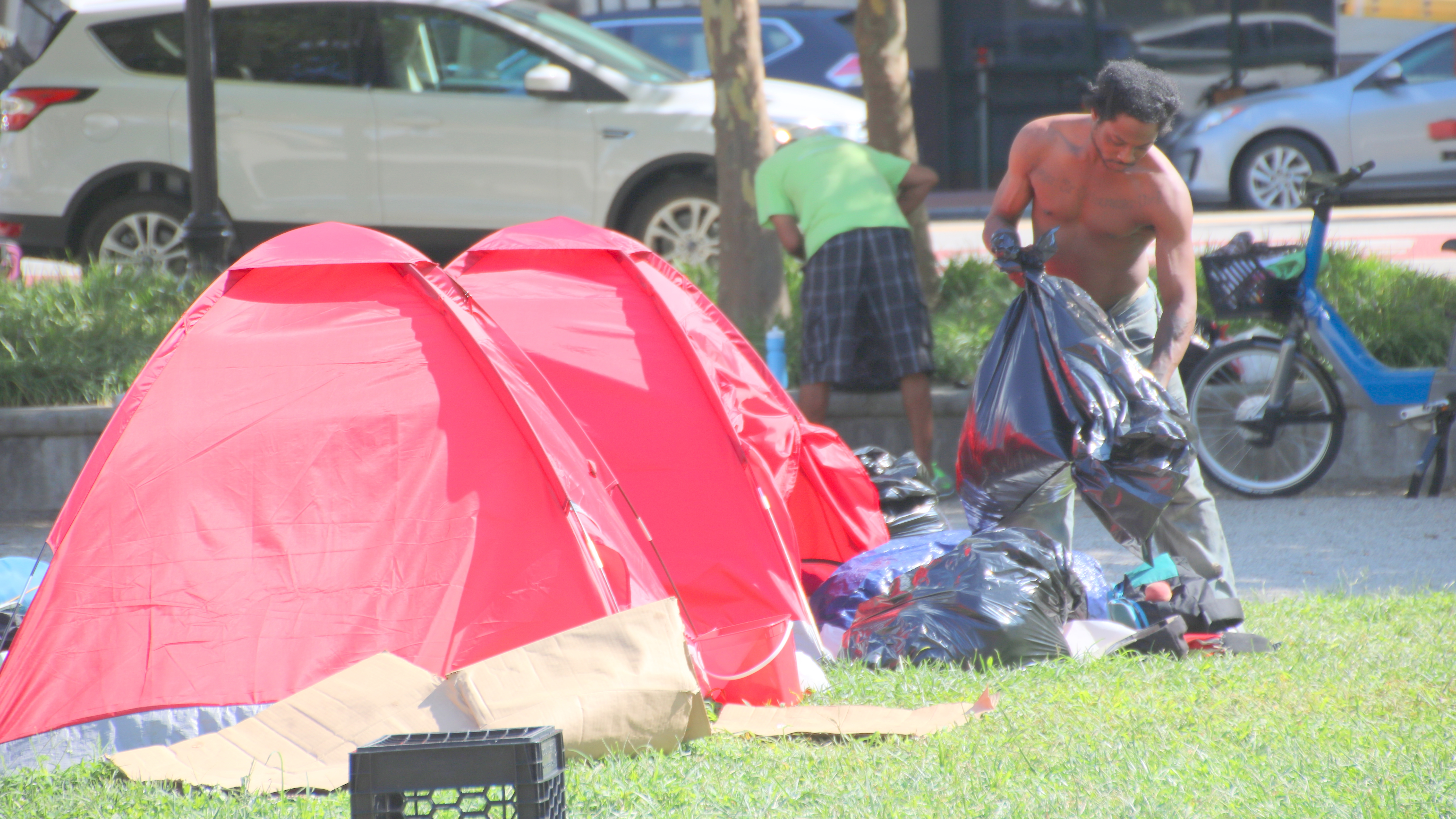 Preparing to leave, participants bag up their belongings and take down tents they had pitched on War Memorial Plaza. (Louis Krauss) 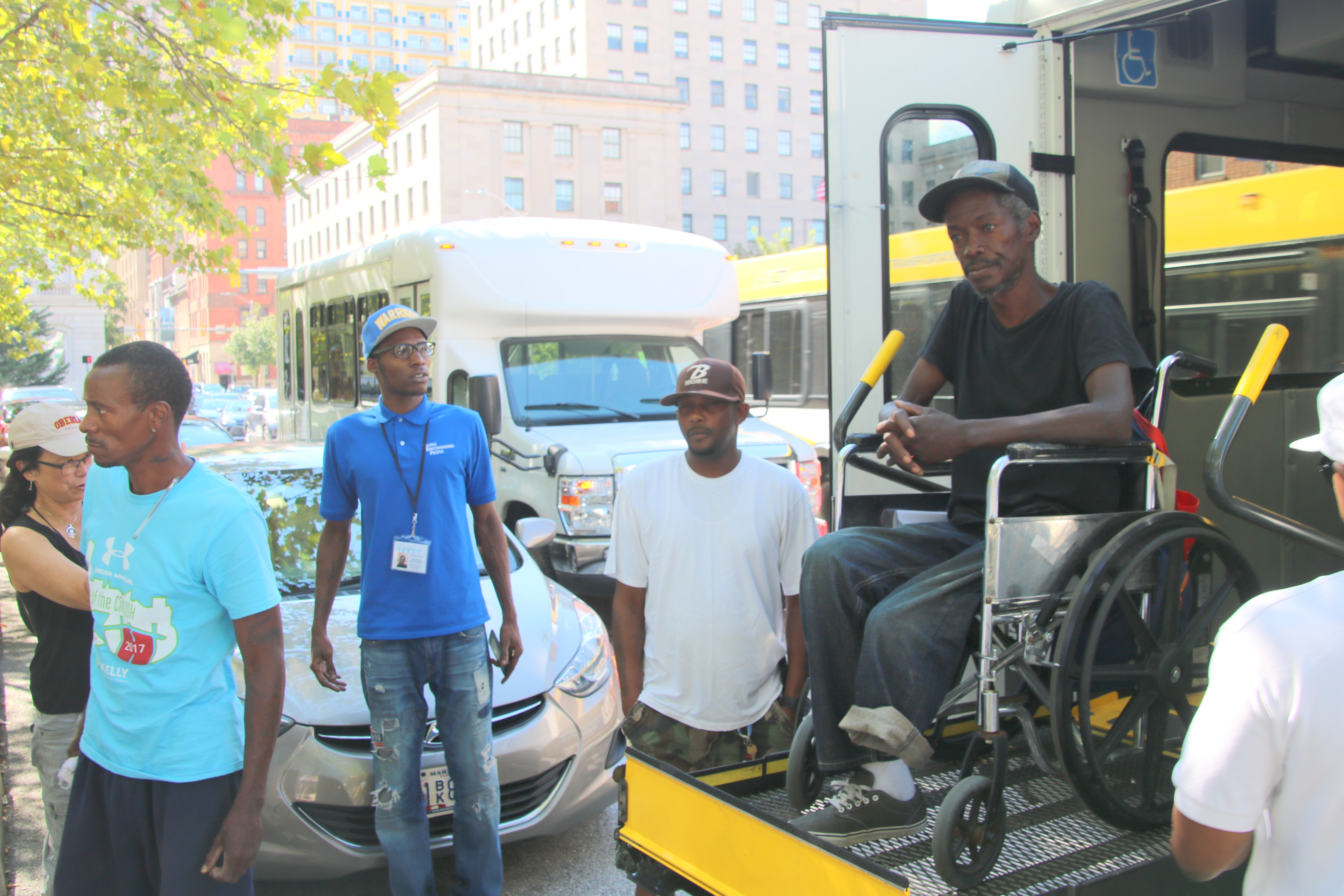 Transported by buses, 55 people are moved from the Tent City encampment in front of City Hall to a former school building in West Baltimore. (Louis Krauss)

There had been no written commitment from Pugh on the agreement, but there were legal waivers – papers that city officials required camp residents to sign before they could go to the temporary housing.

These proved an 11th-hour flashpoint.

“That’s outrageous. Don’t sign them!” said Carolyn Johnson, an attorney from the Homeless Persons Representation Project, approaching Gwee as he spoke with a reporter. “I’m disgusted that they would try and get people to sign these things without having a lawyer review them.”

Gwee and Johnson approached Terry Hickey, director of the Mayor’s Office of Human Services, and tried to slow the process down.

But people were already boarding the buses and Hickey demurred. “This is an emergency shelter situation,” he said. “The city needs to be protected just like you are.” 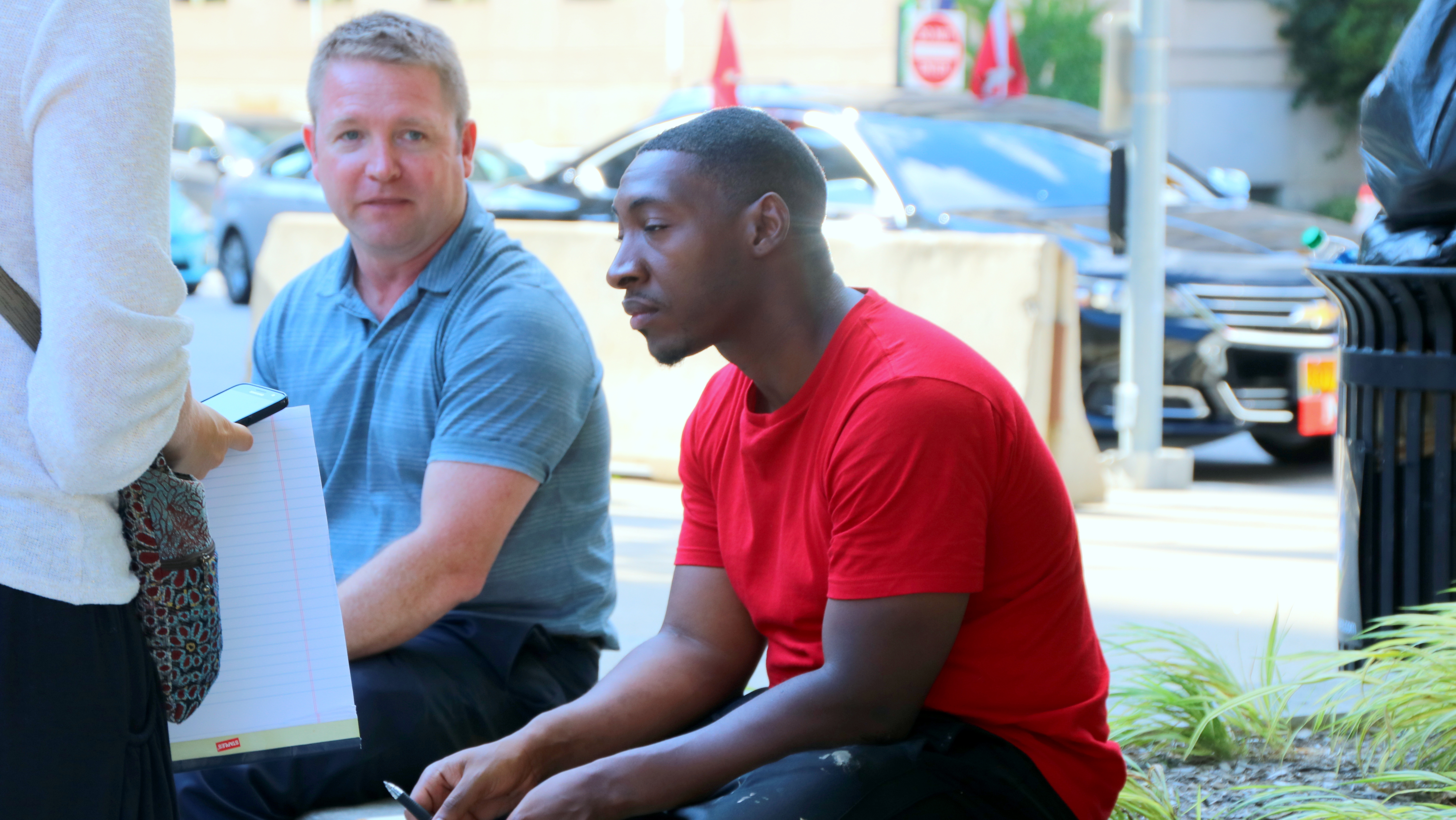 Hickey returned to City Hall and a frustrated Gwee exploded.

“I don’t like this, I didn’t like how we were pushed at the last minute,” he said.

“Homeless people have shown here that they have the capacity to build their own committees, to self-govern themselves. That’s a reflection of Baltimore City and their view of the homeless  – pushing that waiver at the last moment and [saying] if you don’t sign it, they will run it like a shelter.”

For a Moment, a Mini-City

It was a bittersweet end to an ambitious protest.

There had been support from groups including Baltimore Bloc and 300 Gangstas. At times there was music playing. There was a portable toilet and a tent for the organizers’ table. Gwee gave media interviews about the need for “foundational change” to create “a new economy that benefits all.”

There were donations of food and produce and bottled water from an assortment of groups and individuals. There were also security issues, a series of torrential rainstorms and, according to one encampment resident, the occasional rat gnawing on the tents.

The city’s housing offer came on the condition that everyone leave, “so there was a lot of in-fighting when some people said they didn’t want to go,” according to Payam Sohrabi, of Baltimore Bloc.

“For at least, tonight, these 55 people are not going to be sleeping on the ground,” said Christina Flowers, a provider of housing for the homeless who was hoping to get approval from the city to offer permanent housing to some of the camp residents.

“I have two weeks to get 60 units ready for inspection,” she said.

Read two organizers’ look back at the protest:

Lawrence Brown, writing on Medium – “Baltimore Tent City and the Victory in Progress”

Kenneth Gwee, posted on Facebook – “Before any misinformation gets out about Tent City, a few facts”

The Pinderhughes building, where the 55 individuals were taken at 1200 North Fremont Avenue, is the former William Pinderhughes Elementary School, which was relocated to another building in 2009.

Transferred over to the city in 2016, the structure features an exterior with peeling paint, bars on the windows and a chain link fence surrounding it.

Since the students left, it has been used as a police training facility and as emergency cold-weather shelter for homeless people as recently as last winter.

(Hickey, speaking earlier outside of City Hall, said he was not aware of any housing or health code violations at the building.) 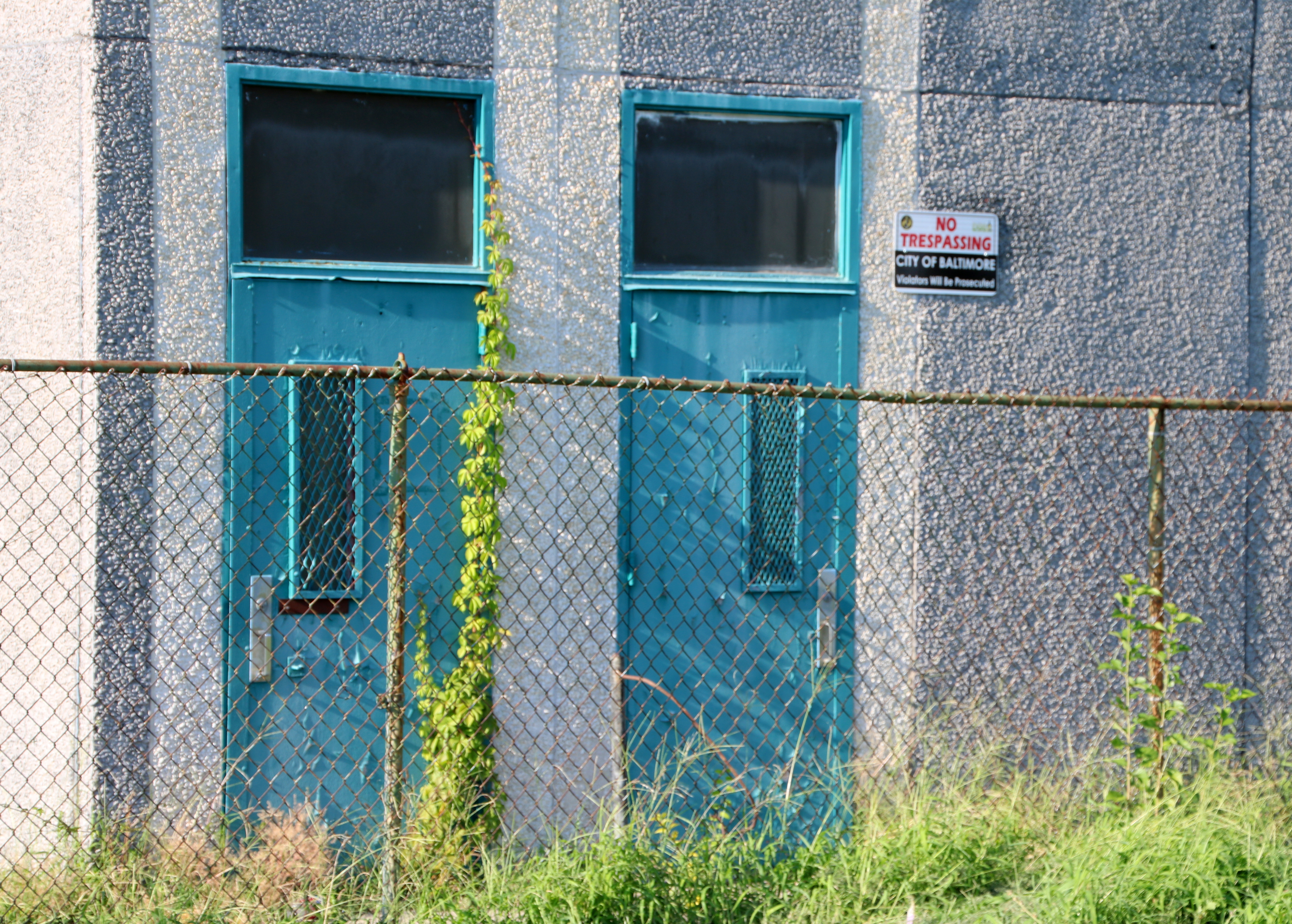 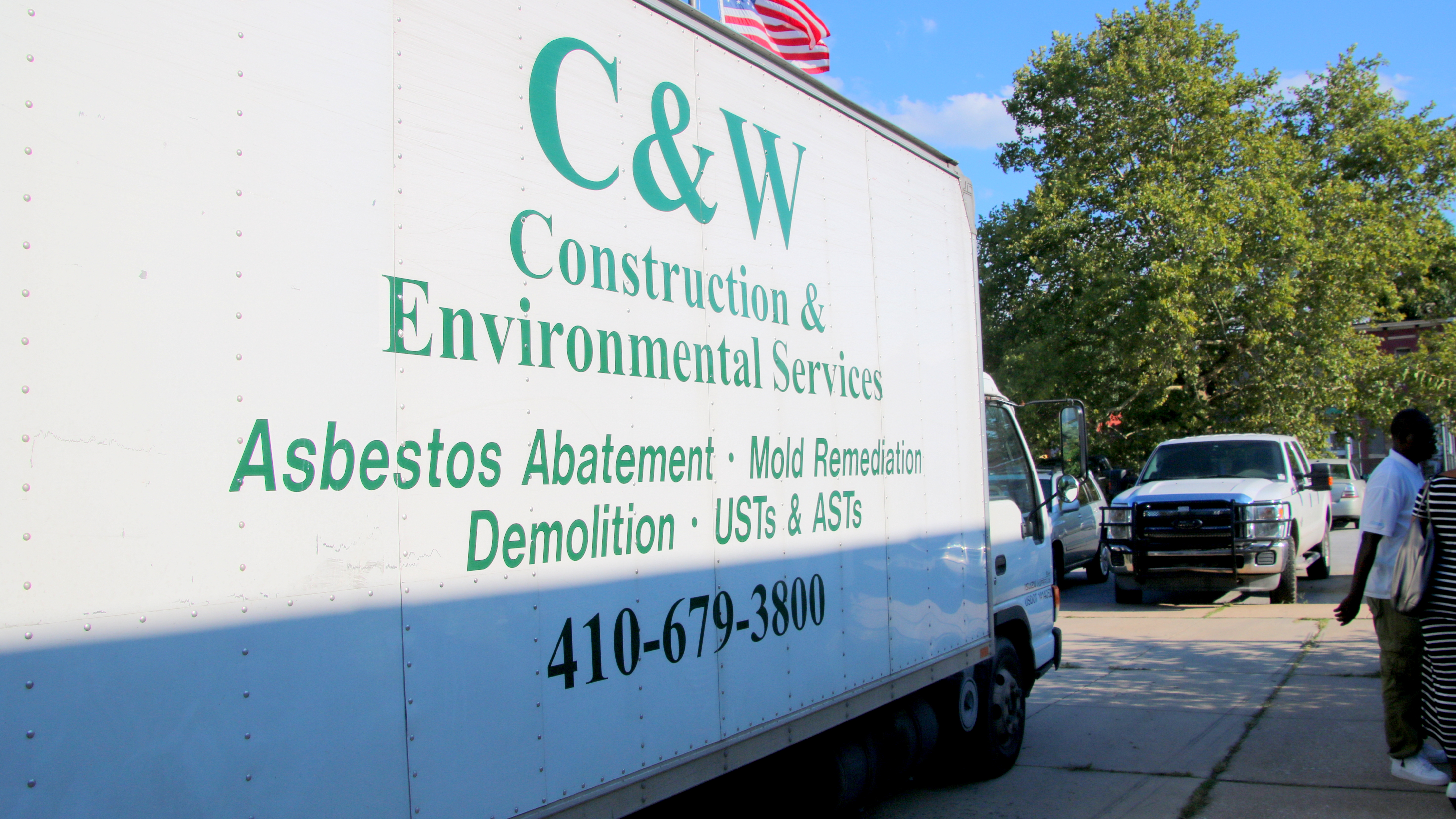 Truck parked at the entrance to the Pinderhughes building. (Louis Krauss) 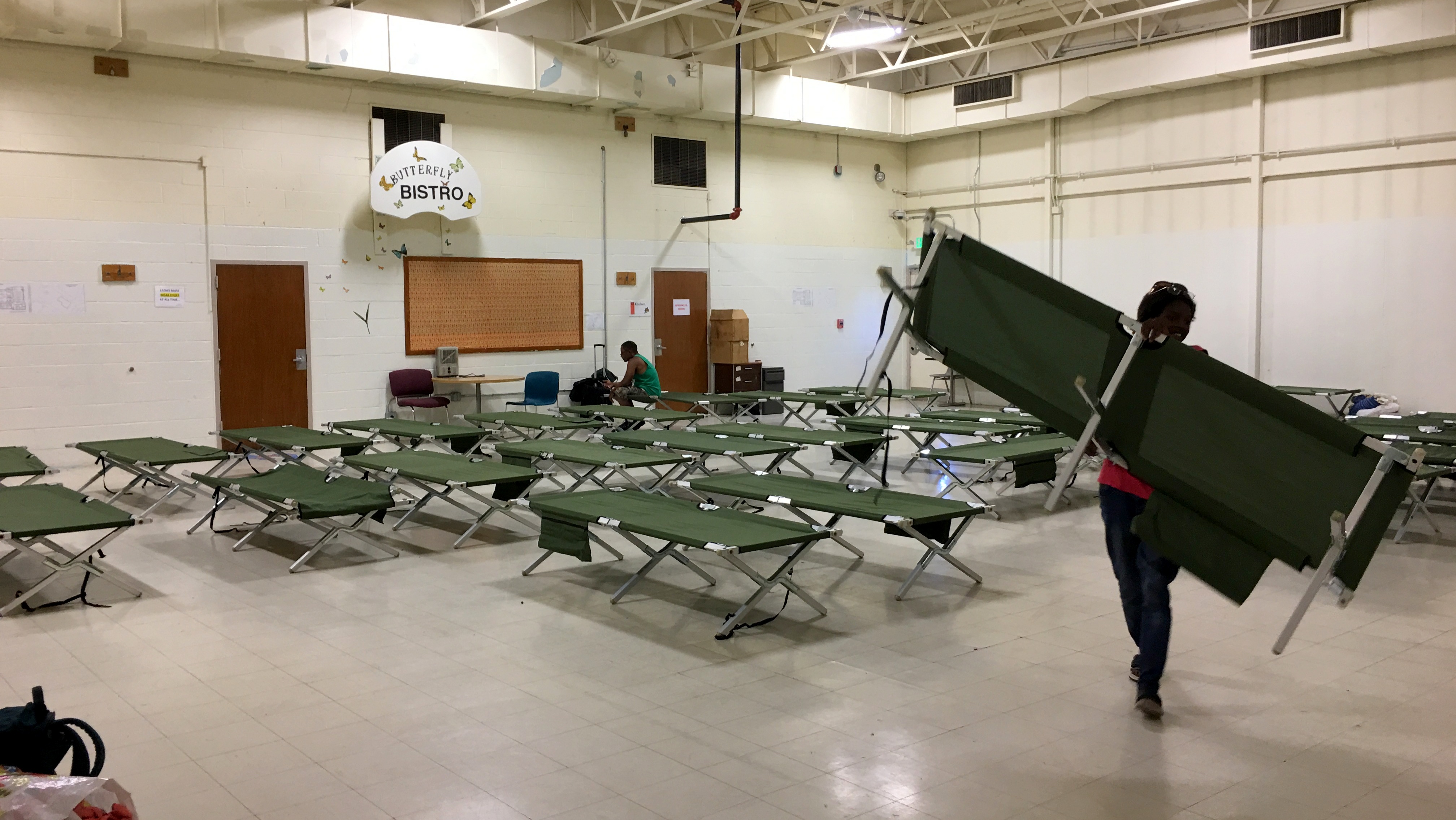 Sleeping area being prepared in the former gym at the Pinderhughes building. (Louis Krauss)

Inside, rows of green cots had been set up in a former gym and other rooms. Staffers were unloading bottled water and other supplies.

One of them was Samantha Smith, a Tent City resident who said she was one of the homeless people who had represented the group in talks with Mayor Pugh.

“It really was a blessing – she offered me a job in her office yesterday,” Smith said.

Smith said she was hopeful that Pugh has come to embrace the “housing first” approach which stresses lowering the barriers to providing people with shelter and only then tackling substance abuse and other issues.

“She’s not a bad person, she’s trying,” Smith said, referring to the mayor.

Straddling the Sandtown and Upton neighborhoods, the hulking building has been a bone of contention for some.

Longtime Sandtown activist Doni Glover was furious at the news that homeless people were being sent there, saying they would hamper efforts to uplift the community.

“We already have an over-saturation of addicts and poor people. We just dump them into the same places,” Glover said angrily.

“It’s making this community ‘Hamsterdam.’ That’s what they call it in The Wire and this is confirming it,” he said. “The people in City Hall have no idea what’s going on in Sandtown. They just know they weren’t getting any votes here.”

Across Winchester Street on one side of the former school are burned-out, boarded-up rowhouses, a trash-strewn alley and a vacant lot where a resident complained earlier this summer that a city contractor had left an unsightly mess. 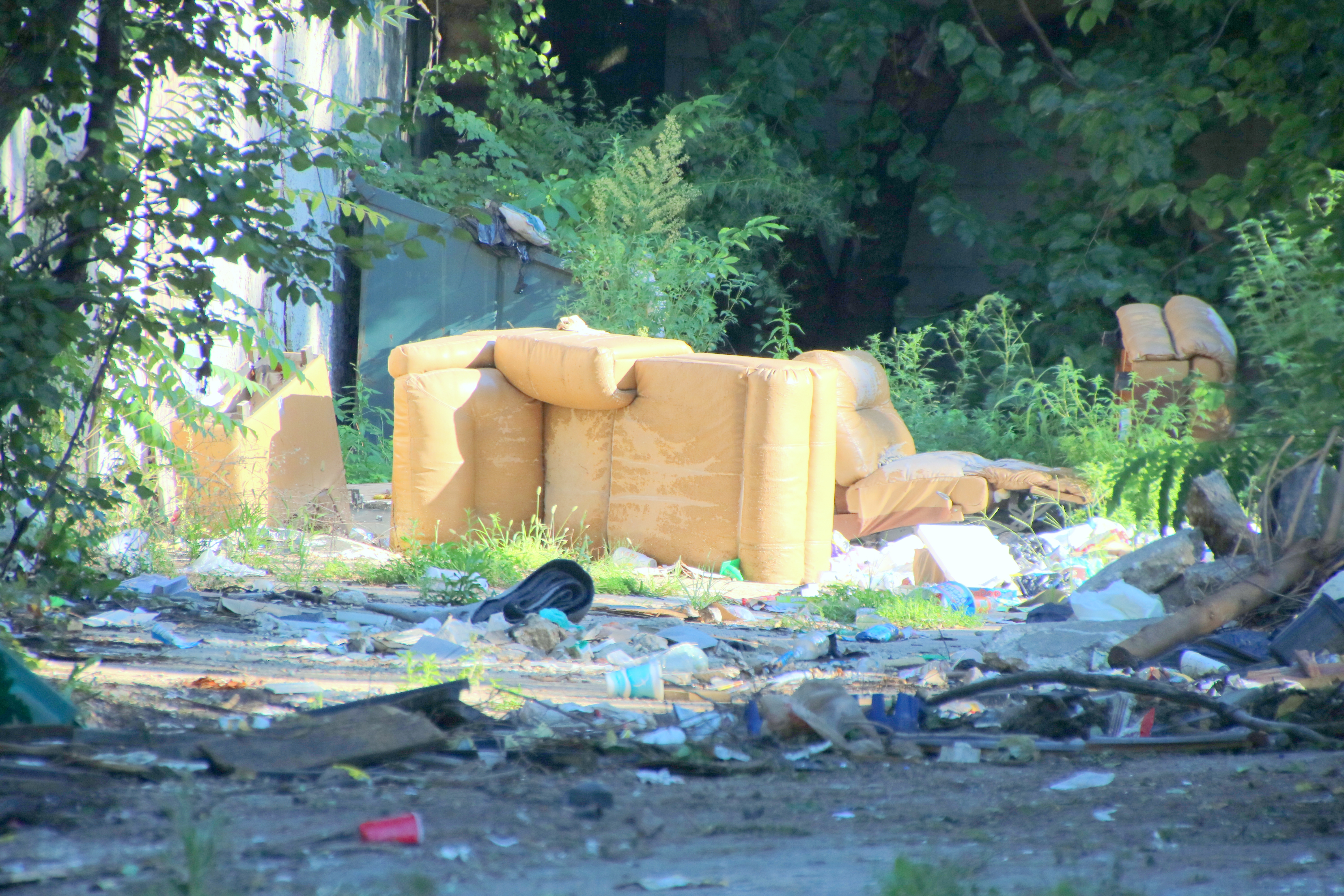 Trash-strewn alley owned by the city off Winchester Street, across from the Pinderhughes building. (Louis Krauss) 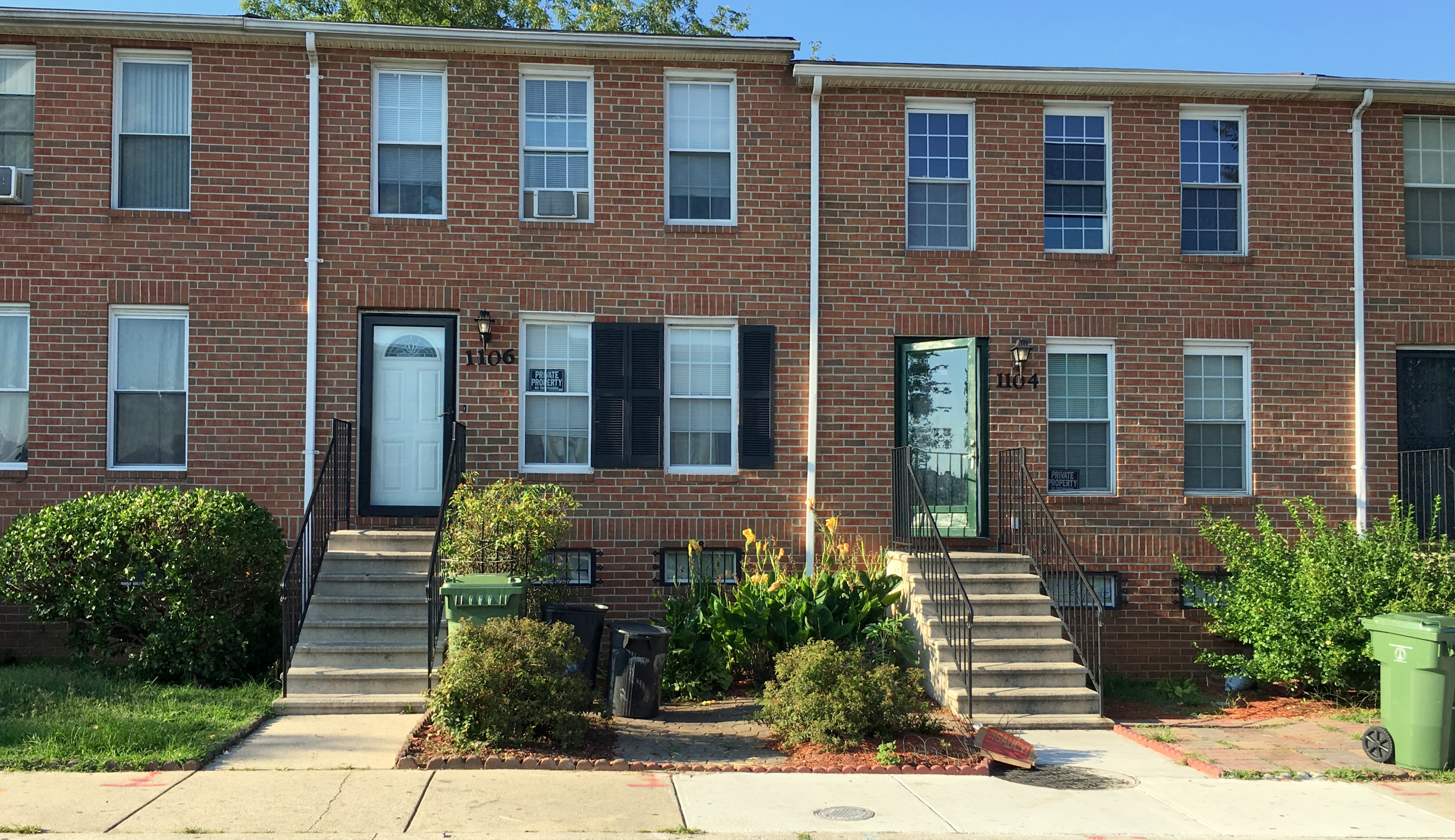 Across Laurens Street, on the other side of the building, are well-kept brick rowhomes, one of them with yellow cannas blooming brightly yesterday.

“At least they’re not out in the rain and hot sun,” said Morris, who lives nearby. “As long as they don’t cause any trouble.”

Another man walking past, who declined to give his name, said the Pinderhughes building, while not a positive, is hardly a negative compared to the nearby streets where drug dealing takes place.

“The kids actually use that playground,” he said, pointing to the dilapidated, trash-strewn, loosely fenced-off play area. “They were talking about making this building a library for a while. That would have been nice.” 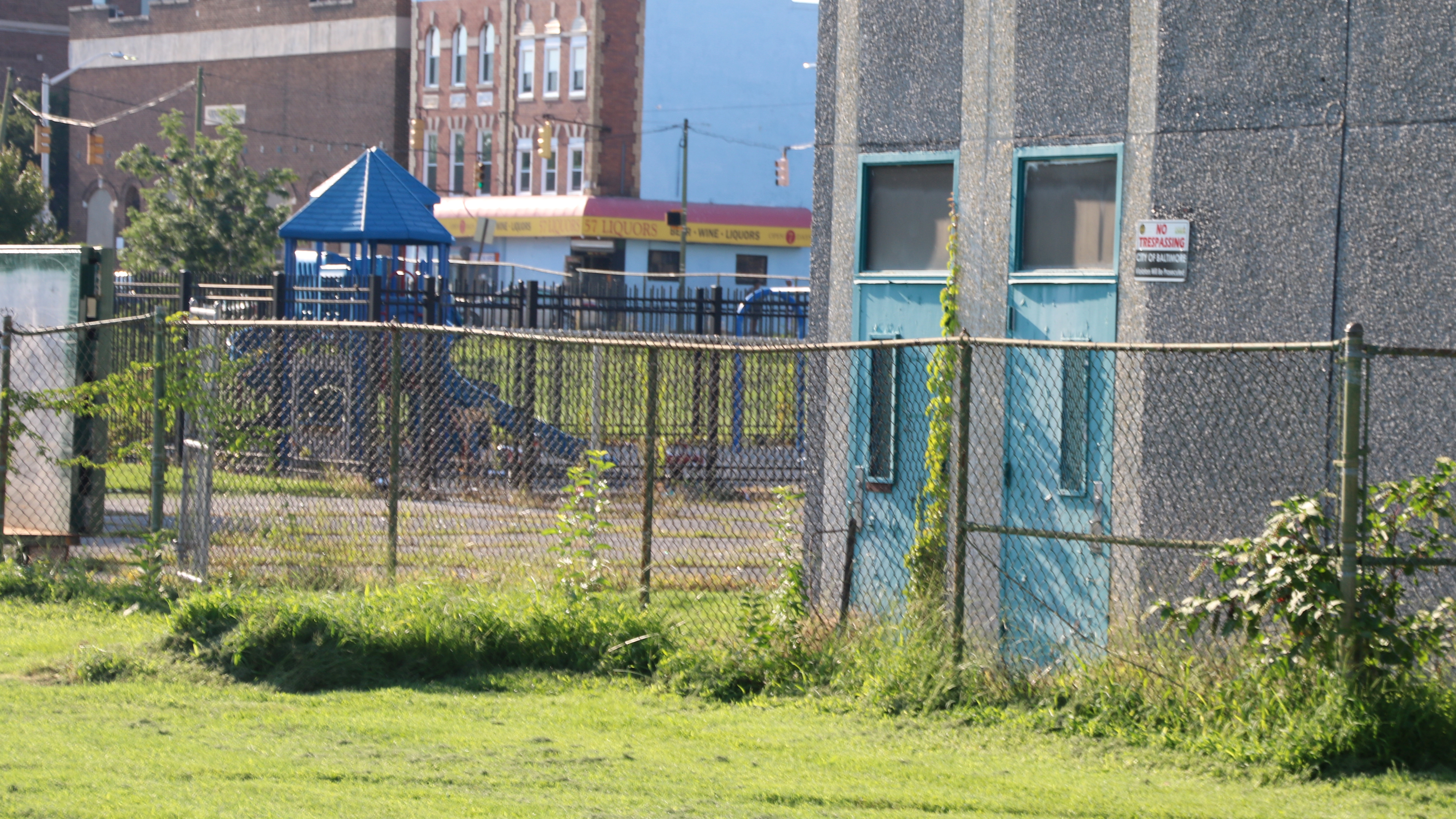 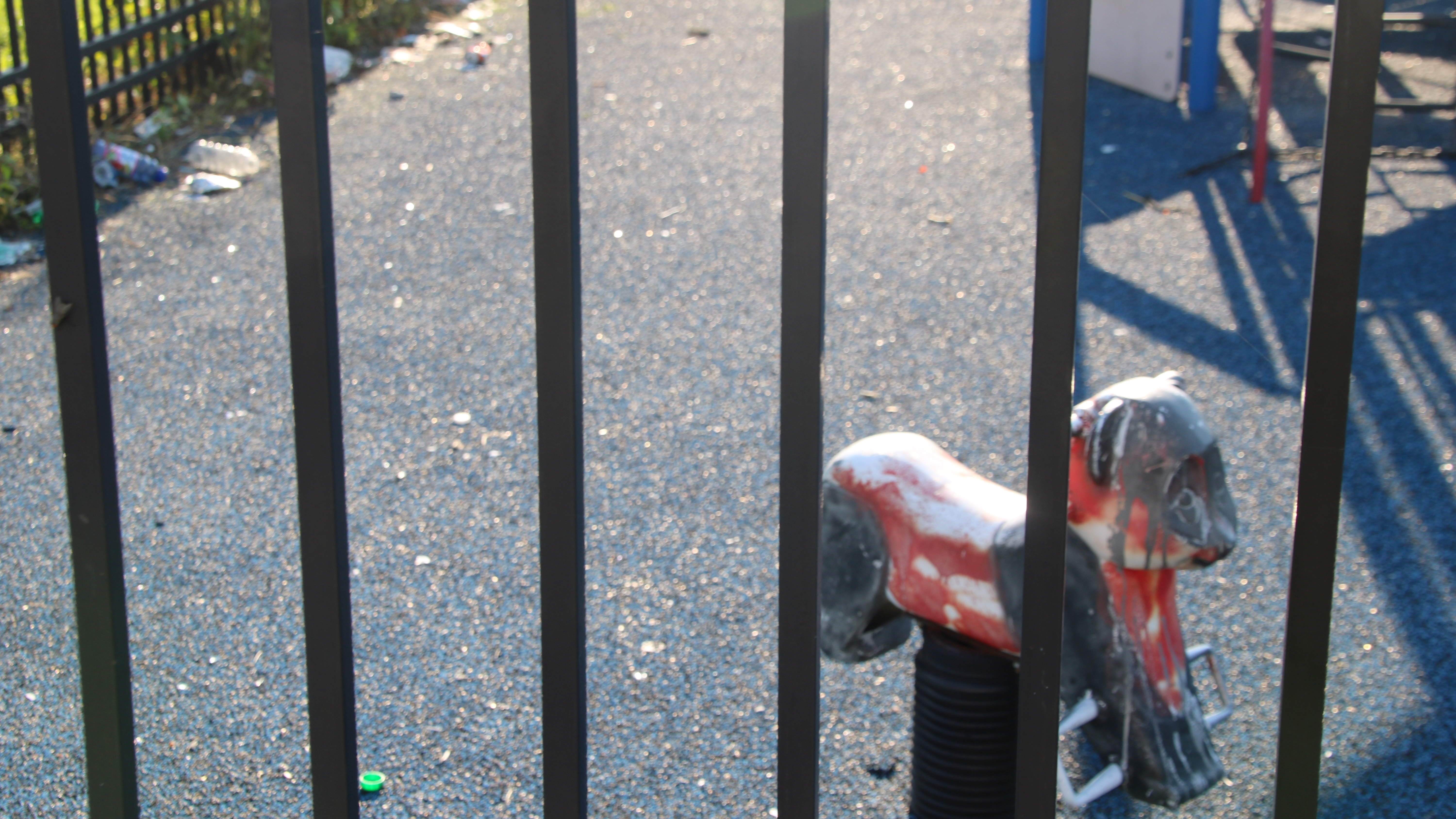 Inside the play area enclosure at Pinderhughes. (Louis Krauss)