When Mayor Catherine Pugh persuaded homeless protesters camped outside City Hall to relocate to a building in Sandtown, she promised they would “get permanent housing as quickly as possible.”

But more than four weeks later, most of the original Tent City 55 are still sleeping on cots in the so-called Pinderhughes Shelter, a dilapidated former elementary school at 1200 Fremont Avenue.

And although Pugh’s agreement with the protesters stated that Pinderhughes would be a “housing first” facility with no drug-testing, all the people living there have been tested for drugs, according to the facility’s director.

“If they don’t do a urinalysis, how are they going to know if they are on pain medications or on methadone?” said Samantha Smith, a Tent City participant who was given a paid position by the mayor to run the shelter.

Smith said the people at Pinderhughes agreed to get the testing voluntarily because they wanted mental health and other treatment, but that it was not a precondition of receiving housing assistance.

“They wanted to change their lives,” Smith said.

Housing advocates are skeptical. “I question whether or not they freely chose this or if they were, in effect, coerced,” said Lauren Siegel, a longtime Baltimore housing advocate who teaches at the University of Maryland School of Social Work.

City officials, meanwhile, have not provided a substantive response to The Brew’s detailed questions about what is going on at Pinderhughes.

“We’ll circle back,” Terry Hickey, director of the Mayor’s Office of Human Services, said more than a week ago.

So far, Hickey and the mayor’s spokesman, Anthony McCarthy, have not responded to the questions and an additional emailed request.

“That would be weird and inappropriate,” she said. “Usually these services are provided in a clinic or community health center.” 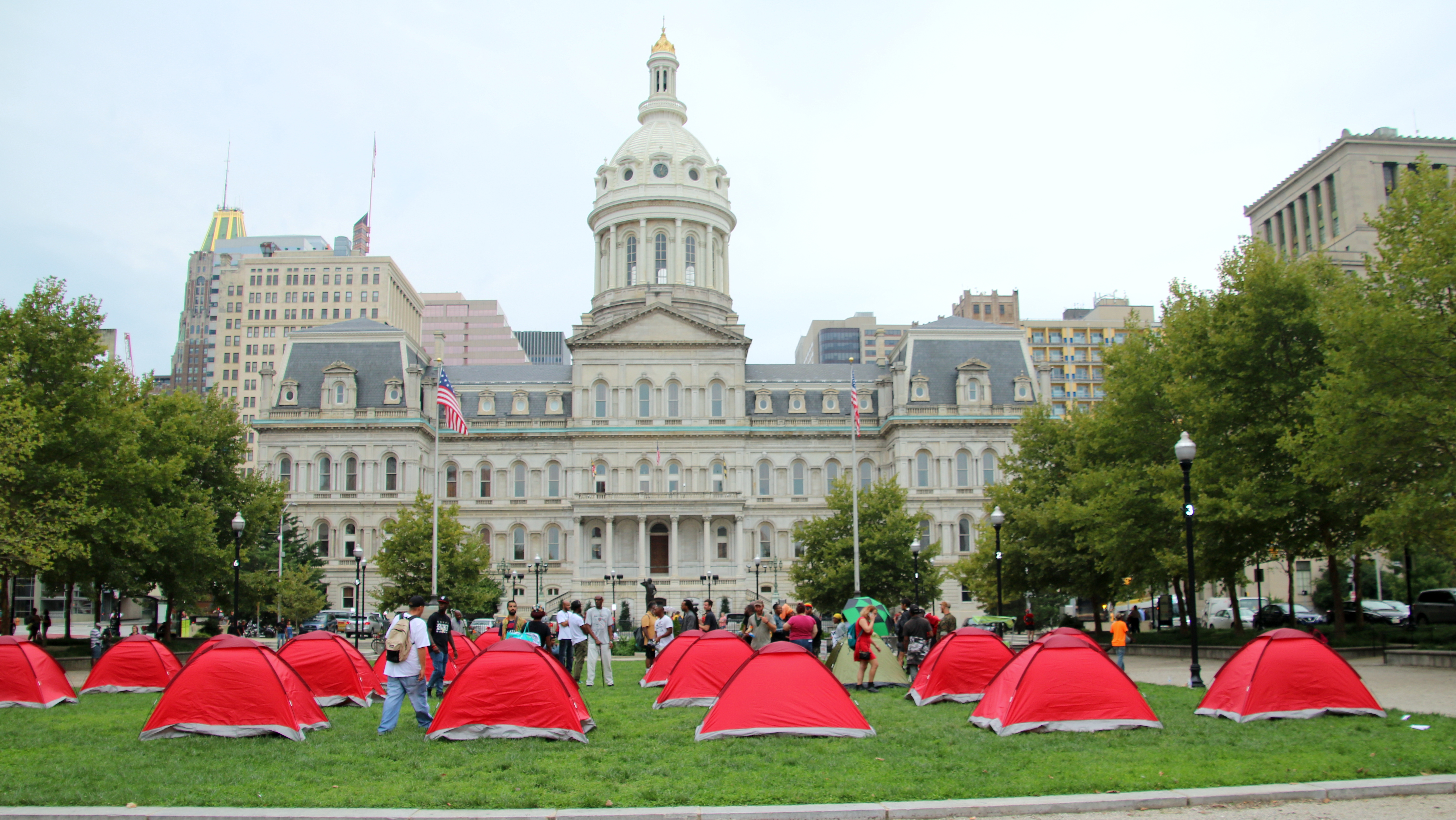 “Tent City” protest was meant to send a message to Mayor Catherine Pugh about homelessness and other pressing issues in Baltimore. (Louis Krauss)

But advocates’ larger concern, she said, is how quickly “housing first” seems to have reverted to “housing last.”

“All of this is different from their stance in the beginning,” Siegel said.

The housing-first approach, once adopted as city policy and embraced by the Tent City leaders, holds that treatment and services are most effective when delivered after people have been placed in stable housing.

The main function of up-front assessments and behavioral and other treatments, critics say, has been to restrict the number of homeless people provided with shelter and to enrich providers.

According to Smith, people at Pinderhughes received initial drug testing and other assessment from a Baltimore-based company called Fresh Start Comprehensive Center.

Case managers from Fresh Start and from Bon Secours Hospital now coordinate mental health and other services and “come in on a regular basis,” Smith said.

In a city where officials also have a policy of razing homeless encampments (most recently behind the Horseshoe Baltimore Casino near the Middle Branch), housing advocates have been concerned about the fate of the high-profile Tent City residents at Pinderhughes.

While the city has arranged for drug treatment there, other more basic services appear to be lacking, according to Siegel, who made several trips to Pinderhughes in past weeks.

“The clients I spoke with on a recent visit asked me to return with bottled water, paper plates and trash bags,” she said.

“One of them, who stated he is a professional chef, told me he’d been ‘making do’ preparing food for himself and the others with a hot plate and a microwave.” 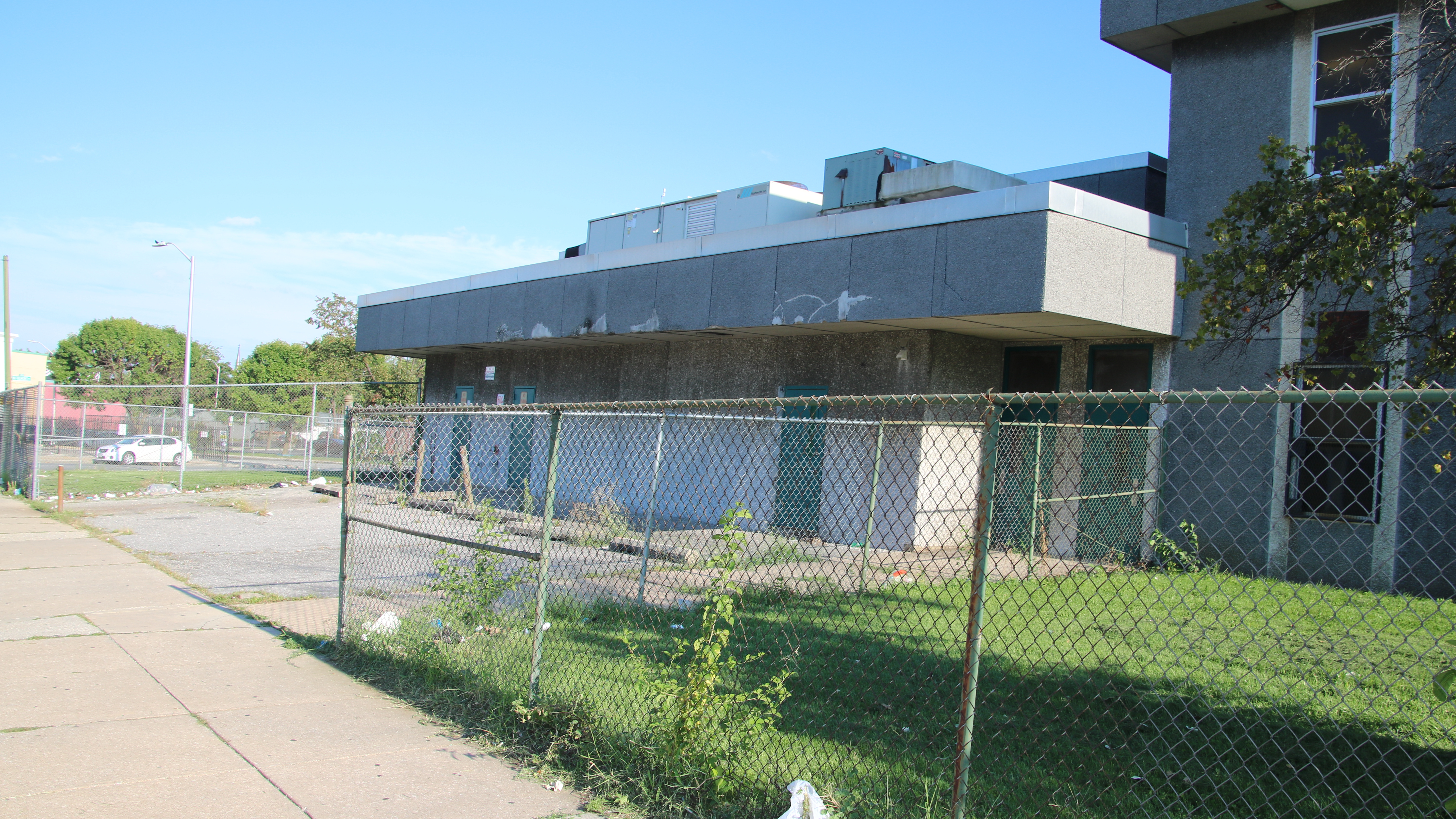 Another advocate for persons experiencing homelessness questioned where city officials hoped to house the 55, given the long waiting list for housing vouchers and other options sought by thousands of city residents.

“Are these people going to be jumped ahead in the line?” this person asked, requesting not to be named because they work with the city. “I’ll be interested to see how they will do this.”

All this comes as advocates await Pugh’s plan for dealing with homelessness. The report of a work group she convened in April was completed two months ago.

The Brew requested a copy of the report after the mayor said she was planning to read the document over the July 28-29 weekend.

The homeless report has still not been released.

Asleep on the Couch

Smith, who refers to residents as “the family,” has an upbeat assessment on her domain.

“It’s wonderful – I have shown that I can get what the people need,” she said.

Chosen by fellow Tent City protesters as their representative, Smith now heads an unusual transitional housing facility that city officials agreed could be run, in a limited fashion, by the Tent City participants themselves.

On a noontime visit last week, Smith was unavailable.

“She’s sleeping,” a security guard said, banging on the door of the director’s office to no avail.

Smith was asleep again yesterday when The Brew showed up unannounced at the center just before 10 a.m.

She was sprawled on a couch in the hallway just inside the main entrance. Waiting outside the building for her to emerge, a reporter spoke with residents, including Ebony Johnson who was not happy at the makeshift shelter.

“We’ve been here a month. I didn’t know we were going to be here this long,” said Johnson, 29, who remarked she’d been hoping for help getting housing.

Sleeping area in the former gym at the Pinderhughes building where Tent City activists were moved. (Louis Krauss)

Johnson said she felt stuck at the facility without bus fare and was not getting treatment for her anxiety and other mental health issues.

“I need to tell somebody how worthless and helpless I feel,” she said, pacing up and down the pavement. “It’s not good here. I’ve been written up [for infractions]. The other residents bully me.”

Smith glared at Johnson and called her back into the building.

“This Place is Wonderful!”

Telling a reporter that both transportation and mental health counseling are available to Johnson, Smith then sent Cheryl Murphy, 54, over to be interviewed.

“This place is wonderful!” Murphy said. “Samantha Smith has been nothing but wonderful. We had a lovely dinner last night.”

Another resident Smith encouraged to come forward this morning was Jason Tyler, who was signing for a delivery of lunches from the St. Vincent de Paul Kidz Table program.

The city provides breakfast and lunch “and we’re on our own for dinner,” Smith said, explaining that different groups donate the evening meal.

Tyler said he became homeless after having worked in a variety of manual and administrative jobs, most recently as a weighmaster.

“I lost my job and things went south,” he said. “I had a kind of mid-life crisis.”

Tyler said the residents were continuing to organize themselves, making decisions collectively and seeking more programs and services.

What about permanent housing, the original point of the protest?

Is “the Mayor Playing Us”?

“Well, we want to see what happens and what develops from all we’ve done here,” Tyler said.

“We’ve cleaned out the entire building. We’ve rearranged everything. We started to get spreadsheets together,” he said. “We’re trying to get the equipment that we need to structuralize us. We’re trying to figure out how to batten it down.”

Tyler said he hopes the city will create some paid positions at Pinderhughes, but added that he’s not sure where it’s all leading.

“I’m trying to figure out if the mayor is playing us,” he said. “I mean, City Hall are they actually trying to help us in a proactive fashion? Or are they trying to get out this mess because we had a bunch of tents in their front yard?” 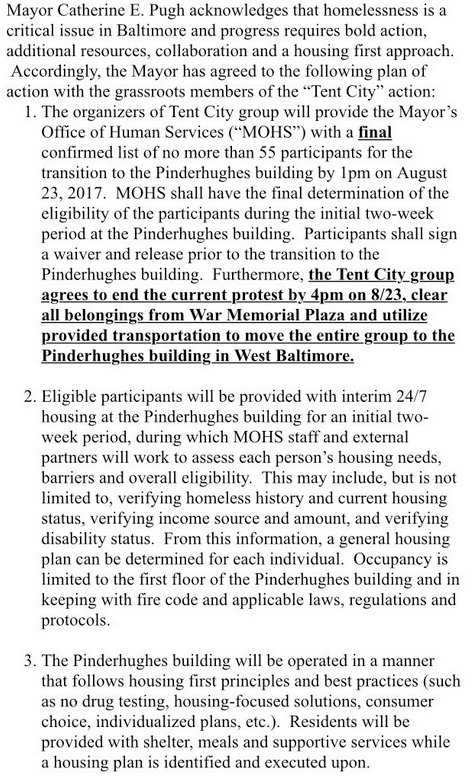 A portion of the agreement between Tent City participants and the Pugh Administration. Section 3 says that there will be no drug testing at Pinderhughes in keeping with housing-first principles.

–Mark Reutter contributed to this story.