Namid Rawls stood outside the tent where he has been living for a month on Guilford Avenue and dug in his trash bag for edible leftovers, finding a few pieces of food and eating them.

Asked this morning how he’s getting by, Rawls said, “I’m a man of god.”

“I’m just waiting for heaven,” said the 36-year-old, explaining that he is on disability because of mental health issues.

Rawls can’t afford rent (“$700 a month is only enough to eat”) and said he has been terribly cold living in a tent his sister gave him, especially last Saturday night after it snowed.

He said he doesn’t understand why he was kicked out the city’s cold weather overflow shelter a few nights ago.

“I was getting up to go to the bathroom, that’s all I did. They had the police take me away.” 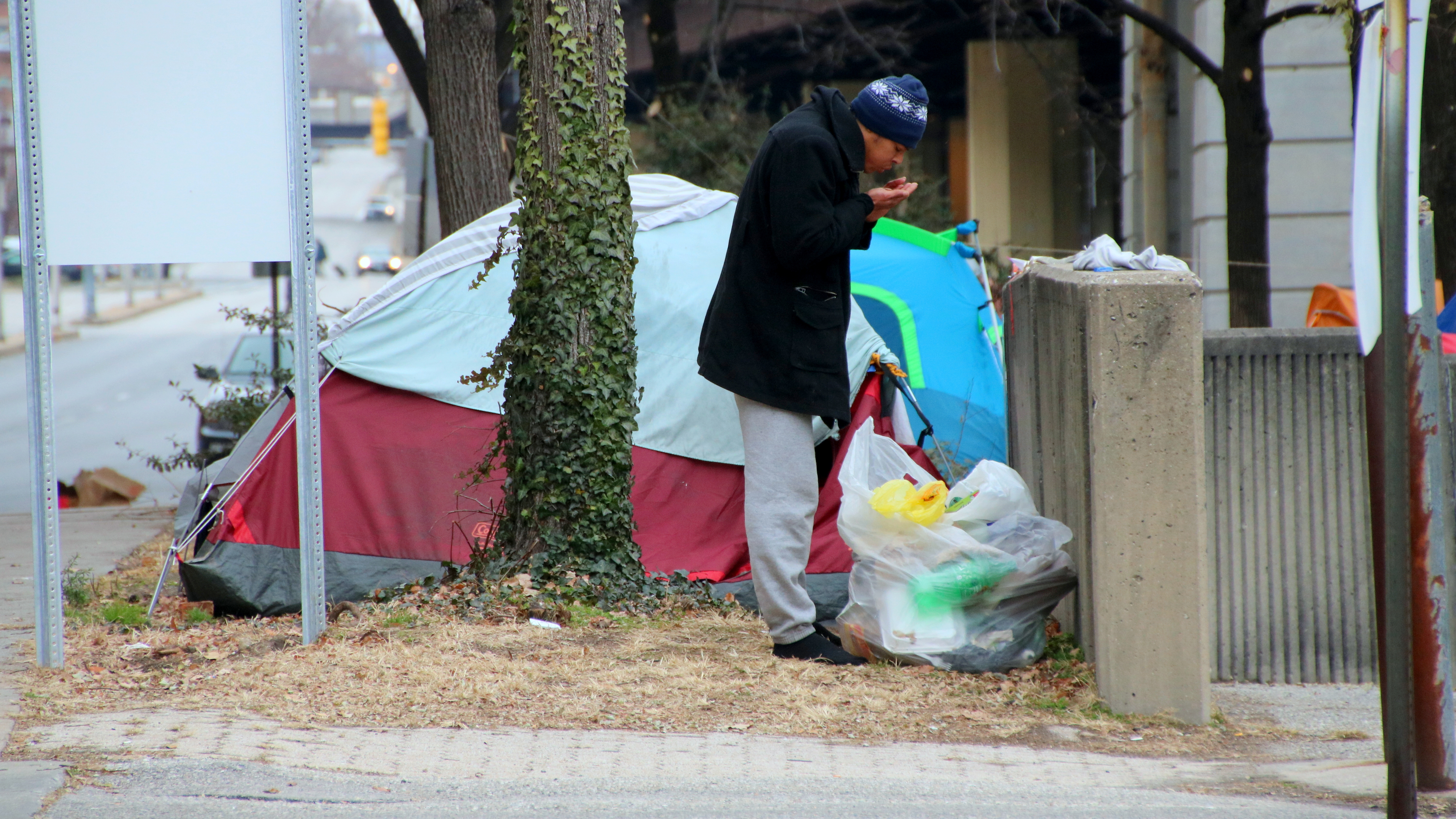 Namid Rawls outside the tent where he has been living, along with about 30 other people, on Guilford Avenue about five blocks from City Hall. (Fern Shen)

With temperatures forecast to drop into the 20s tonight and wind chill temperatures in the teens, Baltimore’s homeless service says it is prepared with 150 emergency overflow beds – and as many as 360 spaces at the Pinderhughes Shelter, a former elementary school in Sandtown-Winchester.

The city’s winter shelter plan “guarantees emergency shelter for all individuals and families who request it when the temperature is 32 degrees or below, including wind chill,” said Terry Hickey, director of the Mayor’s Office of Human Services.

The shelter plan, he emphasized, is not tied to the Health Department’s “Code Blue” system that goes into effect when the temperature dips to 13 degrees or below.

Since the winter shelter plan began on October 15, it has gone into effect on 12 nights, according to Hickey, and will remain in effect for the remainder of this week.

But such measures are not enough to deal with the city’s homeless population, says Christina Flowers, who was outside City Hall today protesting what she said was the Pugh’s administration lackadaisical response to “the homeless crisis.”

Flowers said people with serious problems, such as Namid Rawls, need special assistance to get them out of the cold and into comfortable housing and necessary support services.

“They need navigators. They need emergency accommodation,” said Flowers, the founder of Belvedere Assisted Living. “I don’t want to have to be pulling bodies out of these tents.” 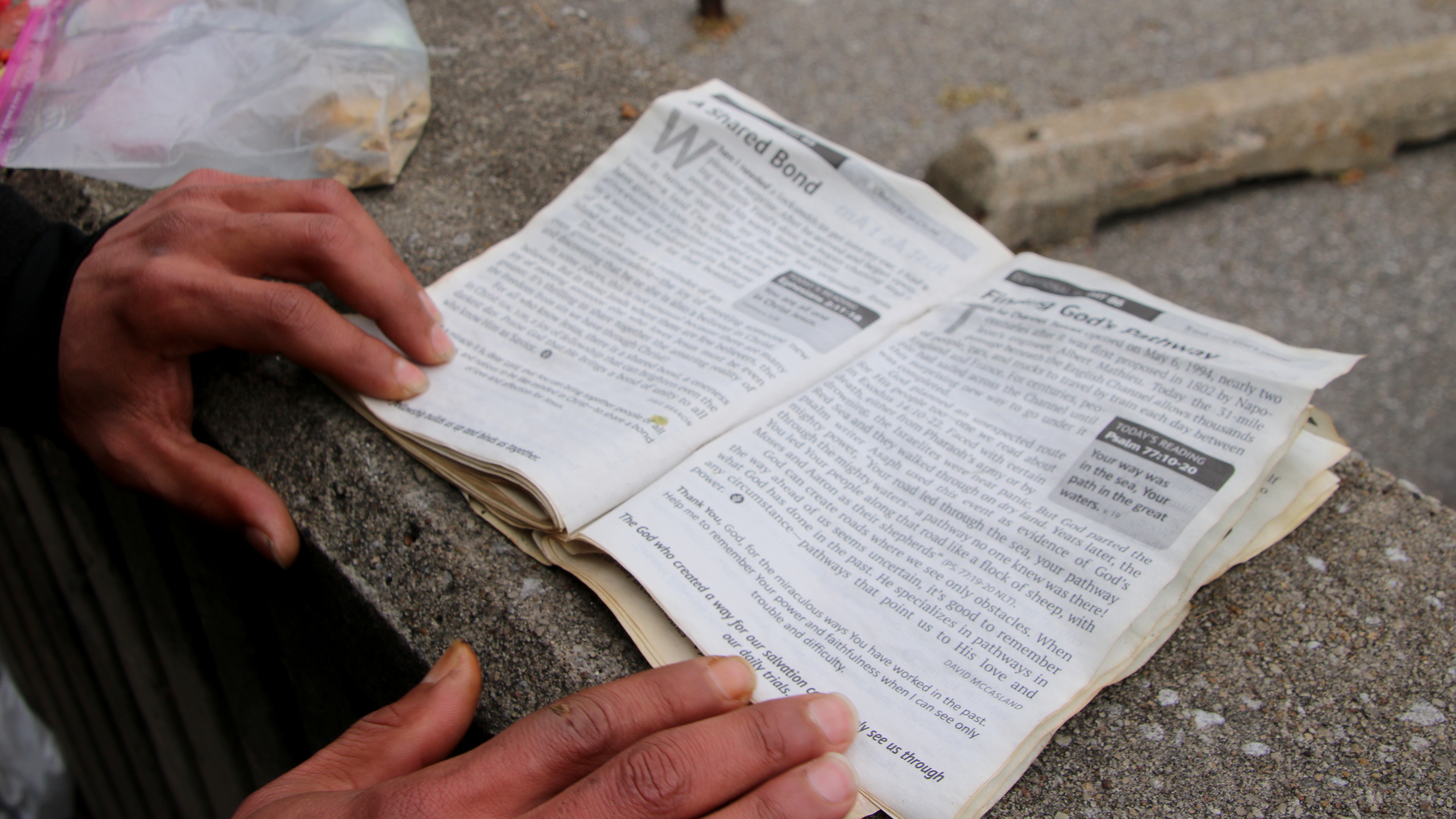 At the time, Flowers, who knew the man who suffered from hearing and speech disabilities, said that the new mayor should declare a “state of emergency.”

Since then, Pugh has repeatedly expressed concern about the problem – the Mayoral Workgroup on Homelessness says 5,232 people experienced homelessness in fiscal 2016 – but has done little concrete to alleviate the problem other than to call on private donations and to resettle a homeless protest group, “Tent City,” that camped part of the summer at War Memorial Plaza facing City Hall. 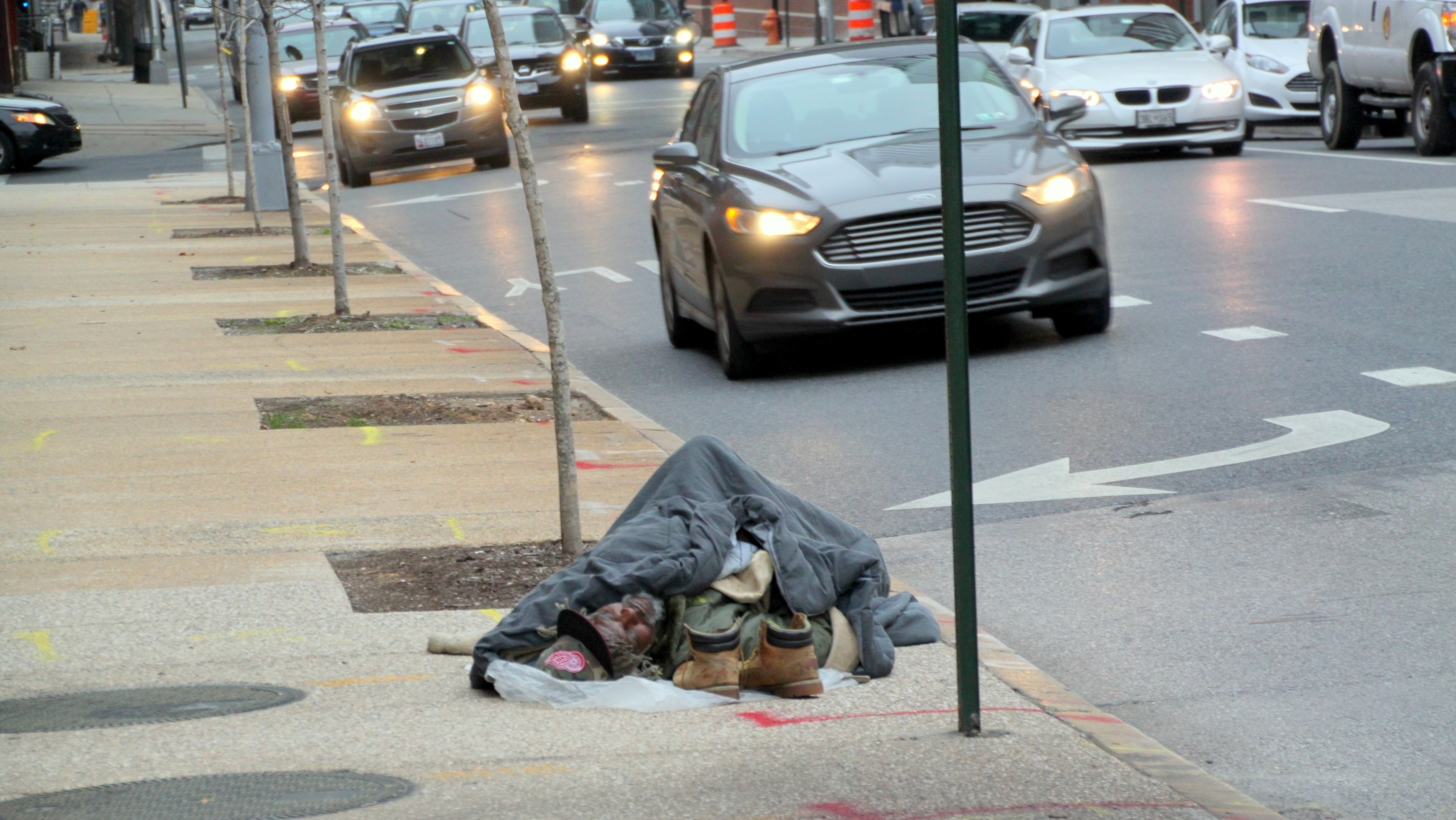 A man sleeping on Calvert Street outside of the Baltimore Sun building. (Fern Shen)

The winter shelter plan, in effect since 2015, has undergone a number of changes.

This year, according to Board of Estimates records, the city has allocated $362,000 to three private facilities to house people during nights when temperatures drop below 32 degrees.

In addition, the city’s main shelter on Fallsway, the Weinberg Housing and Resource Center, has been expanded from 275 to 335 beds.

Meanwhile, the Pinderhughes Shelter, used until last month by the remnants of the Tent City group who had pitched tents in front of City Hall, is permitted for 360 emergency overnight beds.

The overflow facility is supervised by New Vision House of Hope under a $100,886 contract that is set to be approved by the Board of Estimates tomorrow.