Any sign of rodents, insects or pests? Is there hot- and cold-running water? How about chipping paint?

Housing advocates were outside Baltimore Rent Court today telling tenants they won’t have to put up with squalid conditions.

Under a sweeping overhaul of rental housing regulations, one- and two-unit apartments are supposed to be inspected and certified as safe and sanitary by January 1 in order to be licensed.

But Barbara Carpenter, who rents an apartment at a senior building in Ashburton, faced a more immediate problem today – eviction.

A 56-year-old cancer survivor, retired from nursing work and now on disability, Carpenter said she missed a single month’s rent after paying every month faithfully for the nearly three years she has lived in the building.

“My daughter lost her job with the post office. She lived with me, she was on the lease,” Carpenter explained, saying her daughter’s job loss was the result of car trouble that made it impossible for her to get to work.

“I owe $880. I don’t have $880,” Carpenter said, sobbing, on the way back into Rent Court for the second day in a row in hopes of getting rental assistance to forestall eviction.

“My daughter had a job,” Carpenter repeated, as she walked away. “She had a job!”

That she lives on a fixed income so small that one mishap can be the difference between shelter and the street.

But the issues overlap, Henderson, a longtime community advocate, says.

“About 80% of the people evicted in Baltimore live in conditions that are substandard,” she said, citing a 2015 study by the Public Justice Center. “Baltimore is a market where poor people live in substandard housing because it’s all they can afford.”

The new legislation corrects a huge regulatory gap – only rental properties with three or more units were required to be inspected and licensed, while half of the city’s rentals consist of one- and two-unit properties.

Now all rental properties will have to pass a 20-point checklist.

The law won’t fix the dilemma of many renters – that their income is so small that one mishap can be the difference between shelter and the street.

Landlords who fix violations and pass the inspection are rewarded with less frequent inspections — only once every three years. Property owners with more code violations will receive licenses that require inspections annually or every two years.

The landlords will be inspected not by city housing employees, but by state-licensed inspectors hired by the landlords.

Mold not on Checklist

Wearing blue tee shirts and armed with fliers giving examples of some of the questions on the checklist, volunteers for Communities United approached people outside of the Fayette Street courthouse today.

“Nobody’s heard of this,” Rianna Eckel, one of the leafletters, said of the new law, which took effect on August 1. “So it’s good we’re out here. I asked one woman, based on this checklist, would your apartment pass? She said, ‘Definitely not!’”

Eckel said several people complained of mold, including one person whose landlord responded by “sealing up” the moldy walls. 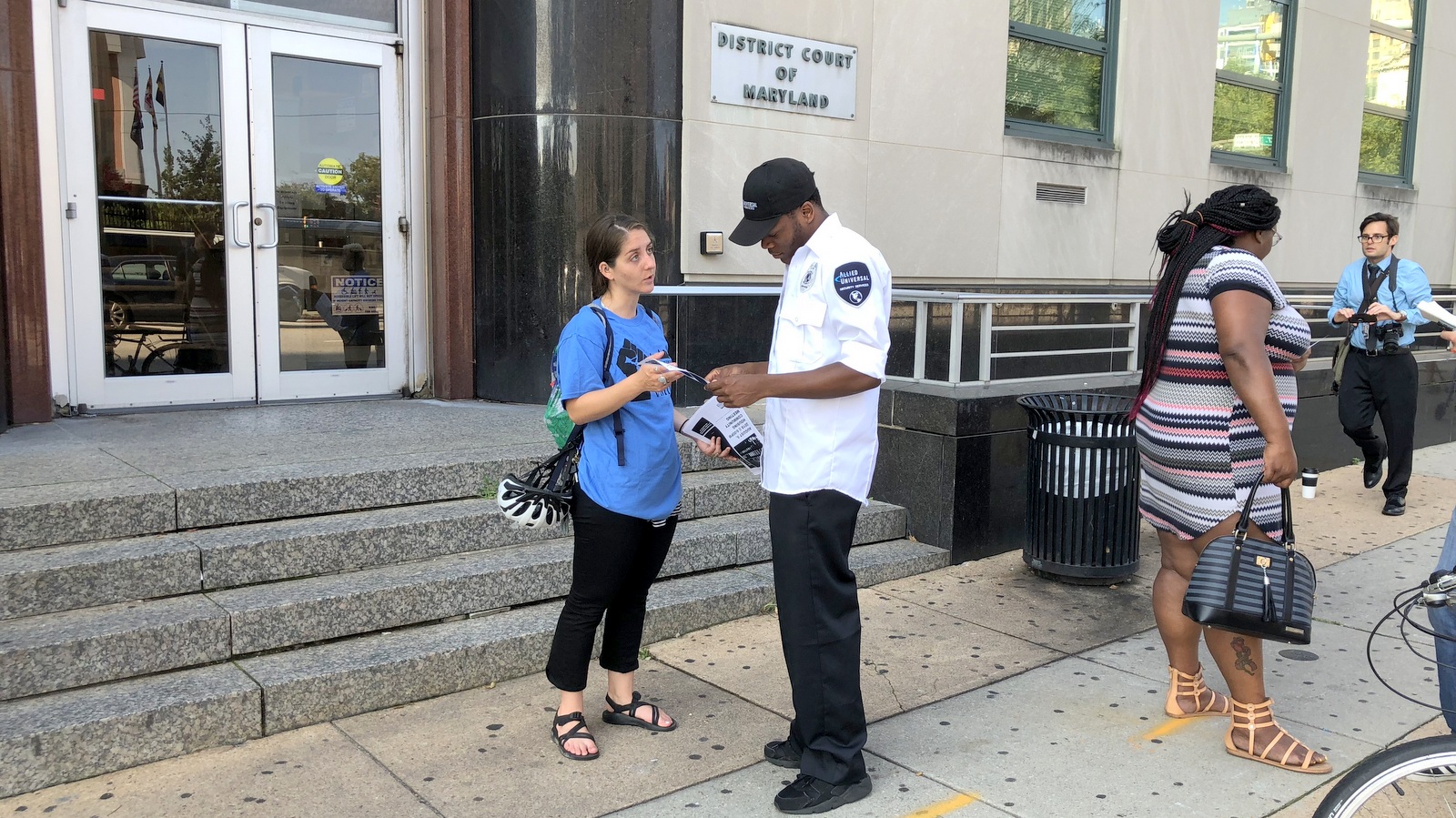 Communities United organizer K.C. Kelleher said mold should be on the list, but the Department of Housing and Community Development did not provide it for advocates to review until late last month.

Asked to respond, HCD spokesperson Tammy Hawley said that “there is no code related to mold.”

“However, several items on the checklist would preclude a property from developing mold issues, such as a clean and sanitary interior environment, free of interior leaks, no standing water, etc.,” she said.

Advocates “were engaged in the development of the checklist” and the agency “received feedback” from them in June, Hawley added.

Other aspects of the new law, which does not cover city public housing, give its supporters pause.

Would the landlords pass the cost of repairs onto tenants? Would the law have the unintended consequence of spawning more evictions? The measure does not require landlords or the city to help displaced renters with relocation costs.

“Landlord told me I could just move”

Mold was just one of the problems that Pernetha Taylor experienced in a Baltimore Highlands house where she lived for two months.

“We had mice and rats in the house. The water kept leaking. The water was brown,” Taylor said, noting that she called code enforcement on the landlord twice.

Even though the landlord owned scores of properties, her apartment didn’t come under the inspection and licensing requirement because it was a single-family rowhouse.

“The landlord told me I could just move,” said Taylor, an active member of Communities United who helped win passage of the Council bill.

Could the measure have helped her if it had been in  effect?

A spokesman for the state’s largest landlord group expressed support for the new law and said that “the city has been great to work with.”

“But I’m nervous about the timing,” added Adam Skolnik, executive director of the Maryland Multi-Housing Association. 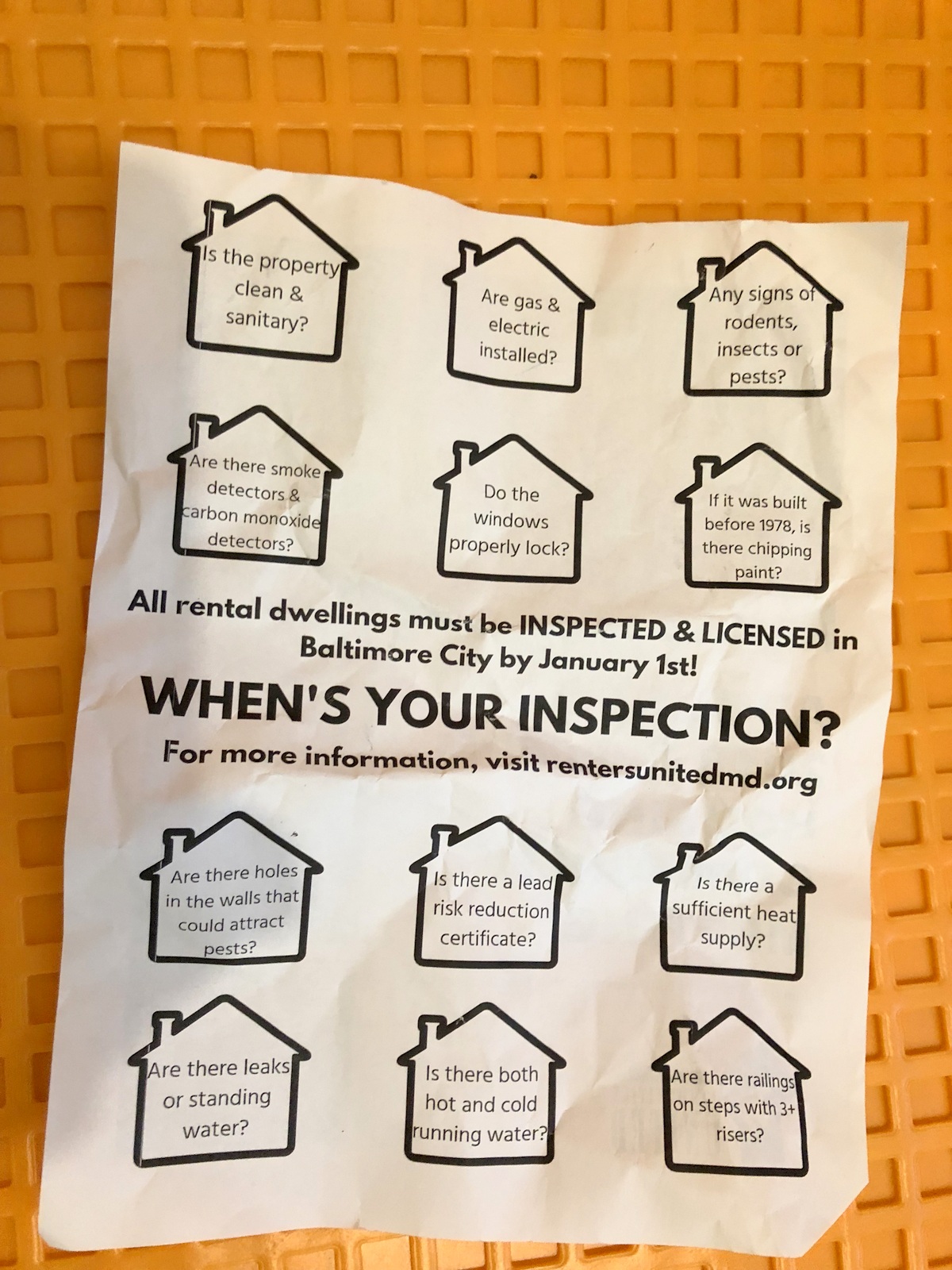 Some items on the checklist for rentals are listed on a flier circulated by Communities United. (Fern Shen)

With only about 200 private inspectors approved by the city, Skolnik said he’s worried that some of the city’s rental properties – especially the small “one-sies and two-sies” – won’t get their paperwork in on time.

“My impression is, if people are genuinely trying, the city will give them the benefit of the doubt,” Skolnik said.

Asked about the mold issue issue, he said, “It’s complicated.”

“Not everything you see that’s growing on the wall is black mold that’s going to trigger asthma,” he said. “There’s a lot more nuance to mold than the advocates will admit.”