Johns Hopkins Hospital’s relationship with East Baltimore has been troubled from the very beginning.

In 1870, when the philanthropist Johns Hopkins announced that he would create the city’s first hospital that treated indigents “without regard to sex, age or color,” irate white neighbors tried to stop his plan.

A city councilman told a protest meeting that his constituents did not want “a hospital of any kind and particularly one for the use of colored persons.”

Until the 1950s, the immediate hospital vicinity was largely white, consisting of some 10,000 politically powerful Czechs who lived on both sides of Broadway in “Little Bohemia.” They thrived and had ample job opportunities within walking distance.

After the neighborhood changed, it lost many jobs and became poor and black. The new residents detected such institutional disdain at Hopkins that they nicknamed it “The Plantation.” Meanwhile, the hospital demolished the homes of some 1,200 blacks so that it could build dormitories for 200 white nurses and doctors.

“The Compound,” as the resulting complex was called, was separated by a tall fence to protect the employees from “vandals.”

Such are the roots of the current political situation. The question of a Hopkins police force has rekindled mistrust that remains among critics of Hopkins’ long history of reconstitution through razing and reconstruction of its surroundings.

Much of the opposition today centers on fears of arbitrary policing, including worries that a stepped-up Hopkins force might stop blacks on campus because of their skin color, or engage in other tactics that could be construed as harassment.

Arbitrary policing is nothing new to the Hopkins area. When Donald D. Pomerleau was the commissioner in the 1970s, he designated “gray” areas where police were not to answer routine calls because of racial tensions. Those areas included the blocks near Hopkins that were left to their own devices; they were black and poor.

Hopkins emerged from the 1968 riots with the hospital unscathed, but with the area’s two retail hubs, Monument Street and Old Town’s Gay Street, torched. The hospital environs looked and felt like a war zone.

Meanwhile, the hospital industry was rapidly changing. Insurance schemes and jet travel enabled patients to shop for treatment. Hopkins no longer existed in vacuum, but faced keen competition for patients who demanded first-rate medical care as well as creature comforts for themselves and visiting friends and family.

How could you keep on marketing Hopkins? The racial situation was deteriorating. Battles came right to the hospital’s doorsteps. A labor union, Local 1199E, joined with Martin Luther King’s Southern Christian Leadership Conference, pledging to unionize Hopkins janitors and other low-income workers. Pickets were posted and angry shouts were heard about “Black Power.”

The racial situation was deteriorating in the 1960s. Battles came right to the hospital’s doorsteps.

My new book, The Ghosts of Johns Hopkins, relates how the hospital and medical school contemplated abandoning Broadway altogether around 1970.

“A hostile black community, constantly reminded of past expansion, limits future enlargement of the site. The characteristics of the neighborhood make the area uncongenial for employees, staff and students,” a planning document said. “The choices made by other patients from outlying areas of the city to enter outlying hospitals for their care reflect a general repulsion from the inner city.”

The developer James W. Rouse’s new town of Columbia was one relocation site that Hopkins considered. In the end, Hopkins decided to stay on Broadway while at the same time enlarge its presence in the suburbs through partnerships and acquisitions.

Aside from the considerable cost of relocating its facilities, Hopkins administrators ultimately decided that being in Baltimore had advantages for a teaching and research university.

The same 1970 planning document noted that “the educational program needs the contact with the inner-city poor and their special burden of physical and social pathology.”

“At the same time,” the document added, “it needs the different pathology of the more affluent, who can communicate deeper insights on the history of their ailments to illuminate the learning and research processes of students.” 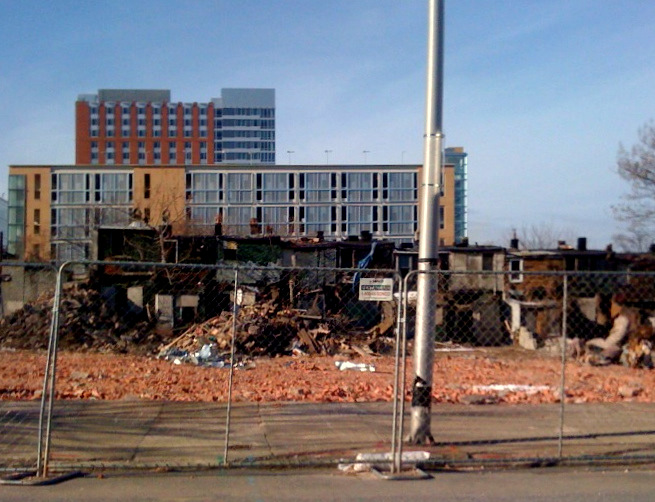 Rubble from demolition along East Eager Street in 2014. A new graduate dorm rises in the background. (Melody Simmons)

Thirty years later, Hopkins responded to the continued malaise of its inner-city neighbors by spearheading an ambitious public-private partnership to tear down and transform 88 acres north of campus into a biotech park and idyllic urban community.

There are still too many blocks of empty lots and boarded-up houses. But progress is being made with new housing and the opening of the Henderson-Hopkins Partnership School, the first new public school building in East Baltimore in decades.

Hopkins now wants its own police force, lobbying the General Assembly for permission, because disarray and staffing shortages in the Baltimore Police Department have rendered routine coverage of its sprawling complex unpredictable.

This is not an unreasonable request. Hopkins is in a tough business: it has to re-earn its reputation as a top medical center every day.

The institution has to be able to provide safety and comfort to patients, visitors, students and employees, if it is to continue as the city’s and state’s largest private-sector employer. Such is the larger backdrop of the policing debate.
___________________________
A reporter with the Baltimore Sun for 35 years, Antero Pietila is the author of  The Ghosts of Johns Hopkins: The Life and Legacy that Shaped an American City, published last November, and  Not in My Neighborhood: How Bigotry Shaped a Great American City (2010).