There has been some confusion about which neighborhood blocks an armed Johns Hopkins police force would patrol, but the boundaries for the patrols have become clearer.

Based on amendments proposed in Annapolis, Hopkins police would be responsible for areas about twice the size covered under the Clery Act.

But that’s if the Baltimore City Council determines that a majority of residents in the neighborhoods approve of Hopkins policing.

The potential territorial expansion is most noticeable in East Baltimore.

Sworn Hopkins officers would be able – upon City Council approval – to patrol as far west as Caroline Street, including the Church Square Shopping Center and parts of Douglass Homes. The patrols would skirt the Dunbar Middle and High Schools.

Patrols could go as far south as Baltimore Street, as far north as Eager Street, and as far east as Castle Street. (NOTE: Castle Street is not a through street. Does that mean that Chester Street, half a block to the east, will become the de-facto border?)

At Homewood, the radius for patrols could extend to Calvert Street on the east, 28th Street on the south, Remington Avenue on the west, and University Parkway on the north.

These boundaries were placed into Senate Bill 793 at the instigation of senators Antonio Hayes (40th) and Cory V. McCray (45th) and approved last night by the Senate delegation in a 3-2 vote.

It is within this “geography” that statistics on assaults, theft, dating violence, rape, drug and liquor law violations, and other crimes must be maintained and disclosed by universities that receive federal funds.

The law is named after Jeanne Clery, a 19-year-old Lehigh University student who was raped and murdered in her campus dormitory by another student in 1986.

There are also areas outside of the campuses that are guarded by Hopkins’ 1,107-strong security force, most of them unarmed foot patrols known as “yellow jackets.”

Hopkins is seeking state approval for its own police department of about 100 armed and sworn officers to handle certain crimes on its property and in the surrounding community.

At the Homewood campus, the proposed boundaries for the private force would be somewhat less than the area patrolled by unarmed security, which currently goes south to 27th Street and east to Guilford and Abell avenues.

Hopkins would continue to patrol north to University Parkway and west to Stony Run Creek and Remington Avenue.

Patrol boundaries for the Peabody Institute would run south to Hamilton Street, west to Cathedral Street, north to Madison Street and east to St. Paul Street.

If the General Assembly passes the legislation, Hopkins would enter into an MOU with the Baltimore Police Department to share crime-fighting duties within the zones.

Homicides and other serious crimes would still be handled by the BPD. The armed Hopkins force would wear body cameras and have to adhere to the same “constitutional policing” that city police are being required to follow under a federal consent decree.

In a major change to the original bill, the amended Senate version would require the Baltimore City Council to approve a resolution “affirming” that Hopkins has received “a majority of support from the members of the relevant campus-adjacent communities for the police department to operate in their communities.”

How the will of the majority will be determined by the Council is not spelled out in the amended language shown here:

An amendment that could cause Hopkins heartburn: A requirement for “majority of support” before policing could start in a community.

UPDATE (3/8): Karen Lancaster, assistant vice president external affairs at Johns Hopkins, says the “blue lines” shown below are the limits of the University’s “potential campus area” and not necessarily the patrol zones for Hopkins police – unless the City Council affirms those zones for patrol. “We are working on some updated maps that should help clarify this visually,” she also told The Brew.

The three maps below were compiled by The Brew showing the “Clery geography” boundaries (red), current Hopkins patrol zones (black dashes) and new potential patrol zones, as amended in the Senate bill (blue).

We apology for our low-tech attempt to add the new boundaries to the fuzzy maps supplied by Johns Hopkins. Anyone who can put this together better, we welcome your help. 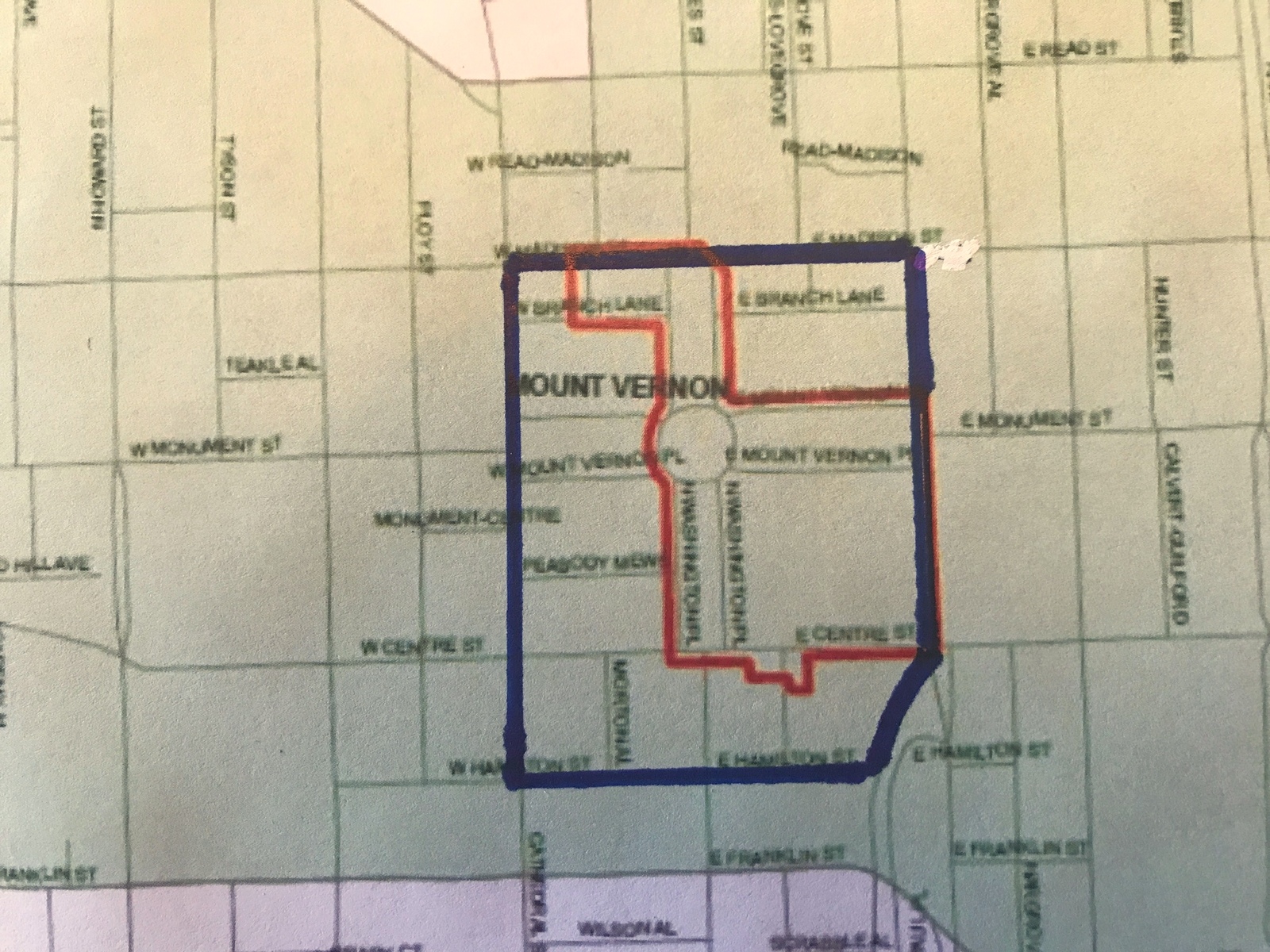 NOTE: The Peabody Institute is located immediately southeast of the Washington Monument, shown here as a circle. 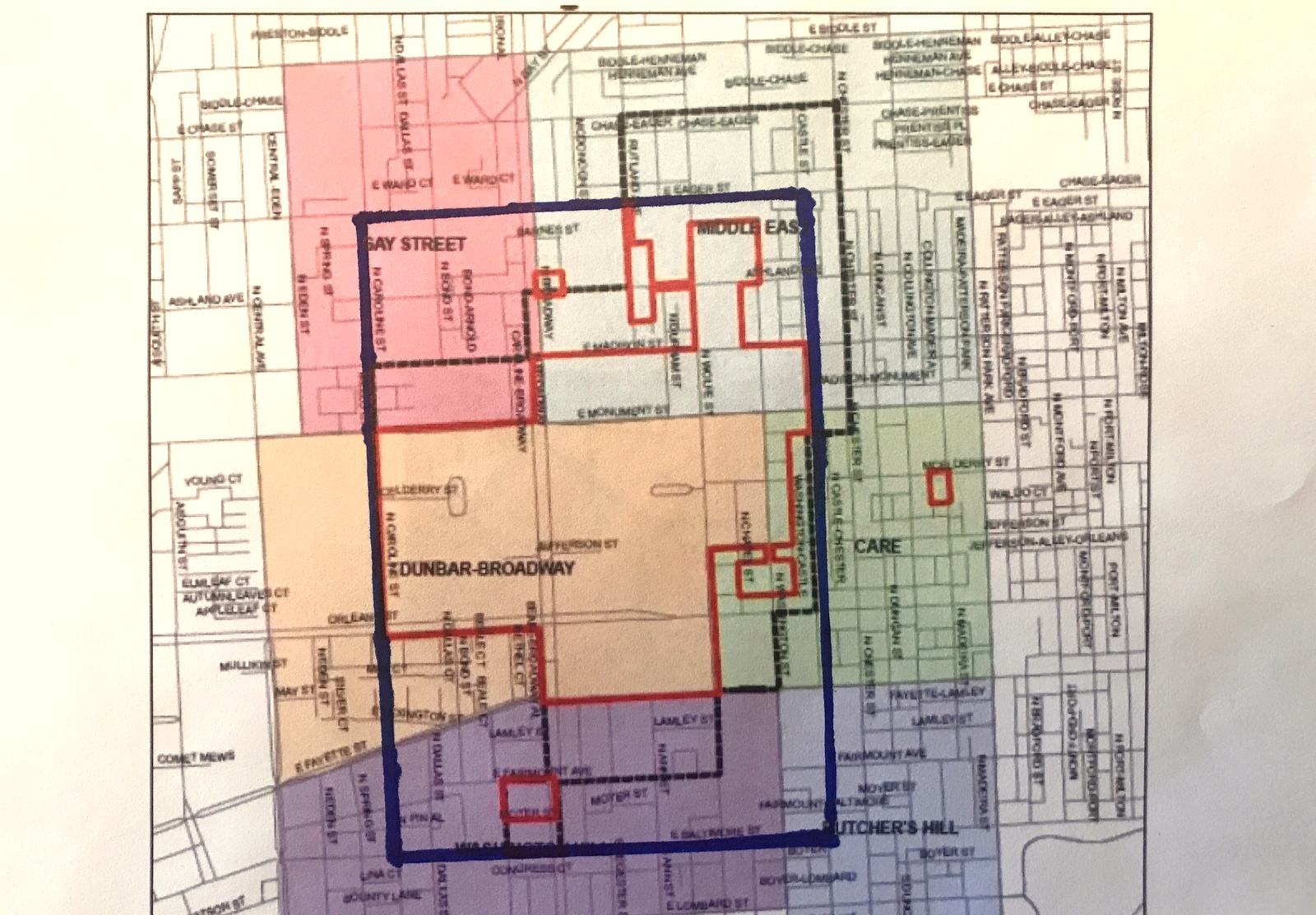 NOTE: The Johns Hopkins Hospital and related entities are located in the central beige-colored area. 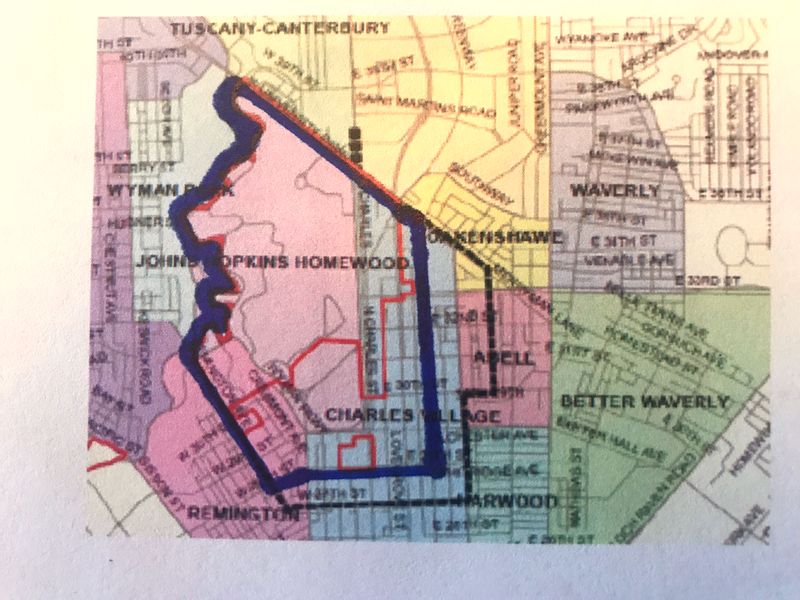 NOTE: The Homewood campus is in light purple.