Baltimore’s Woodberry community moved a step closer to becoming the city’s next local historic district after the Planning Commission supported the designation.

In a first-ever “virtual” meeting held in response to the coronavirus outbreak, the Planning Commission voted 6 to 2 yesterday to accept its staff’s recommendation and recommend passage of a City Council bill that would create the district.

The two opposed to the measure were commission chairman, Sean D. Davis, a principal at Morris & Ritchie Associates, a land development firm, and Councilman Ed Reisinger.

The legislation now moves on to the Council for a public hearing before Reisinger’s Land Use Committee.

If the legislation passes and is signed into law by Mayor Bernard C. “Jack” Young, it means any changes to the exteriors of properties within the designated district, up to and including demolition, would have to be approved by the Commission for Historical and Architectural Preservation (CHAP) before the city will issue a permit for the work.

A hotbed of developer activity, the proposed 80-acre district is bounded by the Jones Falls waterway on the east, Druid Hill Park on the south, Rockrose Avenue on the north and the western edge of Hooperwood Mill on the west.

The Woodberry Community Association asked the city to make the community a historic district after developer Katherine Jennings tore down two pre-Civil War stone millworkers houses that a Jennings colleague promised would be saved as part of a new development. 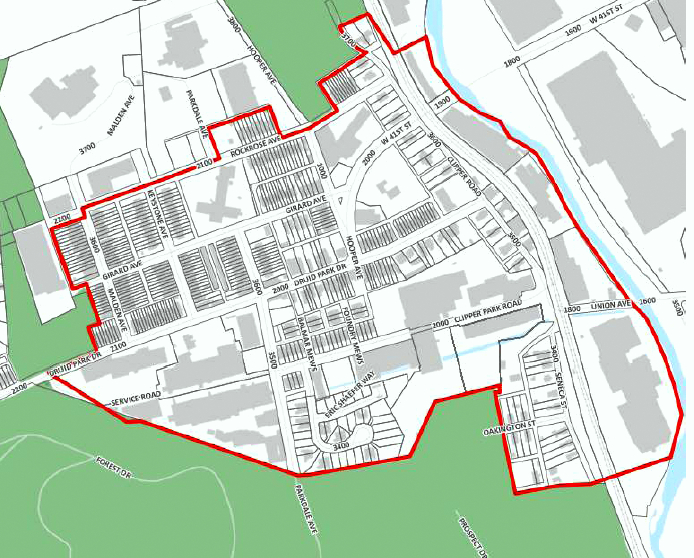 Proposed boundaries of the Woodberry historic district on the west side of the Jones Falls Valley. (CHAP)

The virtual meeting followed the pattern of the commission’s face-to-face meetings, but there were occasional glitches, as when someone failed to press the mute button or had the mute button on when they were trying to speak.

Commissioner Marcia Collins kept getting bypassed in roll call responses because the secretary didn’t hear her initially. At least one participant, Sheri Higgins, president of the Woodberry Community Association, got dropped at the beginning of her testimony. She later signed back in and got to testify.

Nearly two dozen residents spoke in favor of making Woodberry a historic district, while half a dozen property owners called in to voice opposition to the designation.

Those opponents included several property owners in the Brick Hill section of Woodberry and owners of the old Schenuit Rubber Tire factory on Union Avenue, a fire-damaged structure that contains one of the first mills in the Jones Falls Valley.

One property owner who did not speak for or against district designation was Larry Jennings of ValStone Partners, a group that owns key historic parcels in Woodberry’s Clipper Mill community.

Martin Cadogan, the campaign treasurer for Mayor Young, also did not address the commission. He is part of an entity called VI Development LLC that served as a consultant to ValStone Partners in 2019, and he came to at least one previous Planning Commission meeting with Jennings.

Cadogan said in a phone interview that VI’s consulting contract with ValStone ended last December 31 and was not renewed. He said he never had a financial interest or ownership interest in any project at Clipper Mill and now has no involvement in Clipper Mill in any way.

An attorney who did come up on the video conference roster as “Call In User 23,” later identified himself as attorney Joe Woolman.

He represents a group that has a contract to buy the Schenuit building and wants to tear it down and construct a self-storage facility.

Woolman called it a “multi-million-dollar project” and said it wouldn’t be fair to the contract buyers to make them go through CHAP’s review process when they weren’t planning to do so when they negotiated the contract.