Councilman Bill Henry has forced Joan M. Pratt to do something she hasn’t had to do over the six terms she’s been Baltimore comptroller:

Spend money and go negative in a fight to stay in office.

A fixture in the city’s political ecosystem for decades, known for her churchgoing and charitable activities, Pratt, 68, recently put out a mailer and a robocall attacking her challenger in the June 2 Democratic Party primary.

“All that food! All those meals! All that taxpayer money!” says a speech bubble pointing to an expense reporting issue in 2010. In all caps, it continues, “Bill Henry caught trying to rip off the city.”

Pratt’s latest finance report, submitted last week, shows that this and other advertising cost the comptroller (who spent next to nothing running for office during most of her career) over $100,000 in consulting and printing costs.

Over the same period, covering January 9 through April 21, supporters contributed $13,925 to her campaign. The contributions included:

• $1,000 from George P. Mahoney, president of Monumental Paving & Excavating, which is up for a $6.5 million water-main contract at this week’s Board of Estimates where Pratt sits.

• $1,000 from Vernon A. Reid, a city schools commissioner and treasurer of Mary Miller’s mayoral campaign.

Money in the Bank

Henry raised far more than Pratt in the latest filing period, bringing in $62,144, but had considerably less to spend – $82,733 versus Pratt’s $114,408 – owing to the cash that the comptroller has accumulated over the years.

A three-term councilman representing North Baltimore’s 4th District, 51-year-old Henry has been campaigning for the comptroller’s job for months.

Henry’s support came mainly from labor unions and small-dollar contributions, accounting for about $55,000 of the total. Key donations included:

• $5,500 from the Laborers’ International Union of North America (LIUNA).

• $1,500 from the Atlantic Regional Council of Carpenters. 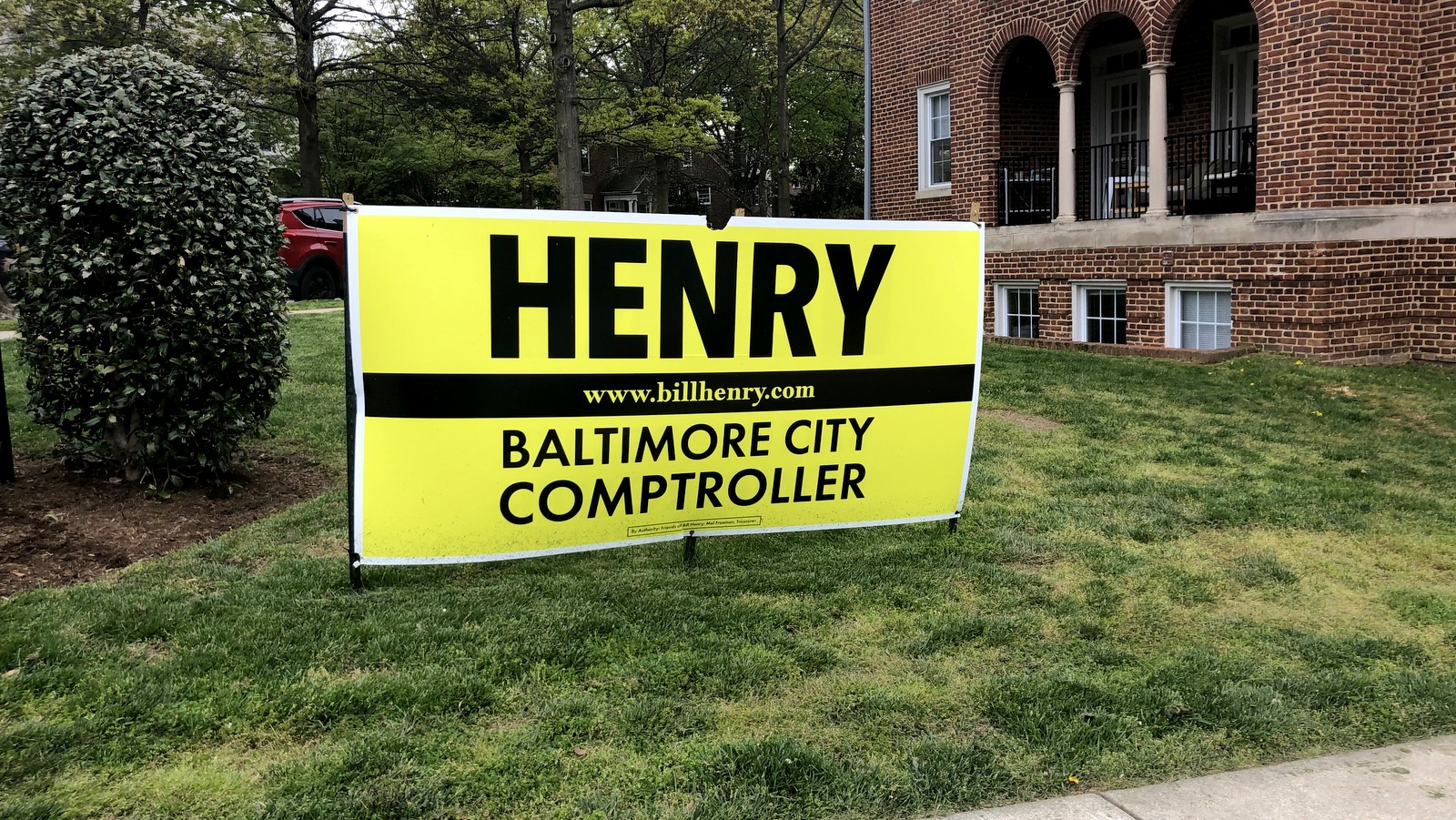 Another source was Henry’s City Council colleagues, who contributed from their campaign accounts.

Facing an active opponent is not the only challenge for the veteran comptroller.

Pratt had largely avoided scrutiny during her six terms of elective office, but over the last six months, she’s been in the spotlight for her co-ownership, with former Mayor Catherine Pugh, of a clothing consignment shop that was used for illegal money laundering.

Federal prosecutors said Columbia businessman J.P. Grant wrote a $20,000 check to 2 Chic Boutique that was used by Pugh for personal expenses and to fund her 2016 mayoral campaign. (They did not directly accuse Pratt of wrongdoing, but said Grant’s illegal payment was not reported as income in tax forms that Pratt acknowledged she prepared for the boutique.)

The comptroller is currently the subject of a conflict-of-interest investigation by Baltimore’s Inspector General and another probe by the U.S. Department of Labor scrutinizing employee overtime practices in her office.

In February, she was faulted by the Inspector General for voting to sell city land, at a steep discount, to Bethel A.M.E. where she has long worshiped and served as a trustee. 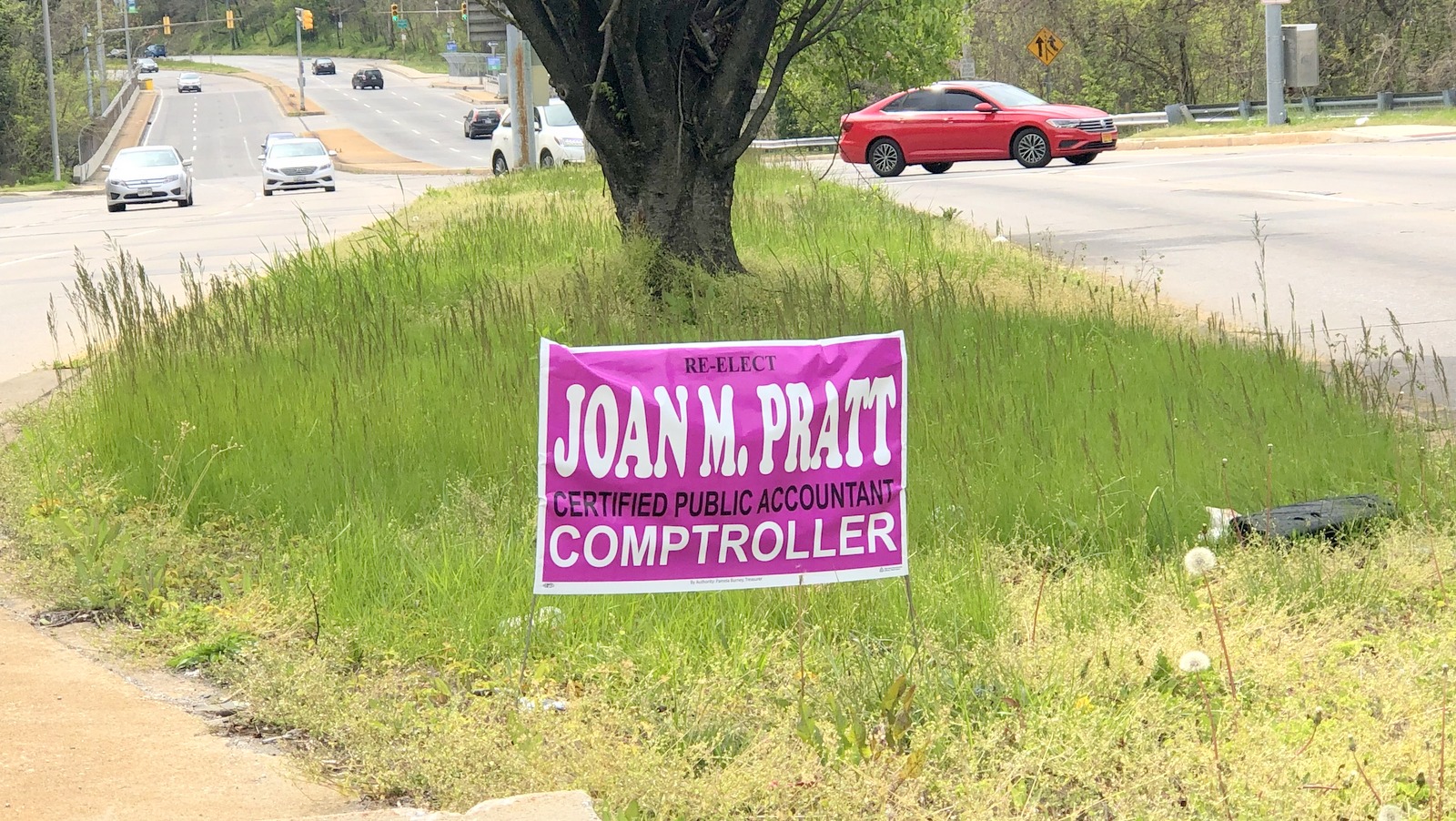 Campaign signs for Joan Pratt can be seen along Northern Parkway, including this one posted illegally in the median strip. (Fern Shen)

In her effort to remain in office, the 68-year-old has declined to say whether longtime friend and political operative Julius Henson (convicted of conspiracy to violate election laws for the infamous 2010 “just relax” robocall) was offering assistance.

Nearly half of what Pratt spent in the last three months – $45,590 – went to IQ & Associates, owned by Iris Queen, who worked for a company owned by Henson that had an office at the same location as Pratt’s private accounting business.

Most of the rest of Pratt’s spending went to Granted In Style ($24,458), a grant-writing company formed by Marsha Kay Koger, and to Uptown Press ($30,123) for campaign literature and yard signs.

Pratt paid phone bills from her campaign account for at least 15 years – as far back as her reports are available with the Maryland State Board of Elections – but reported none in her latest report. 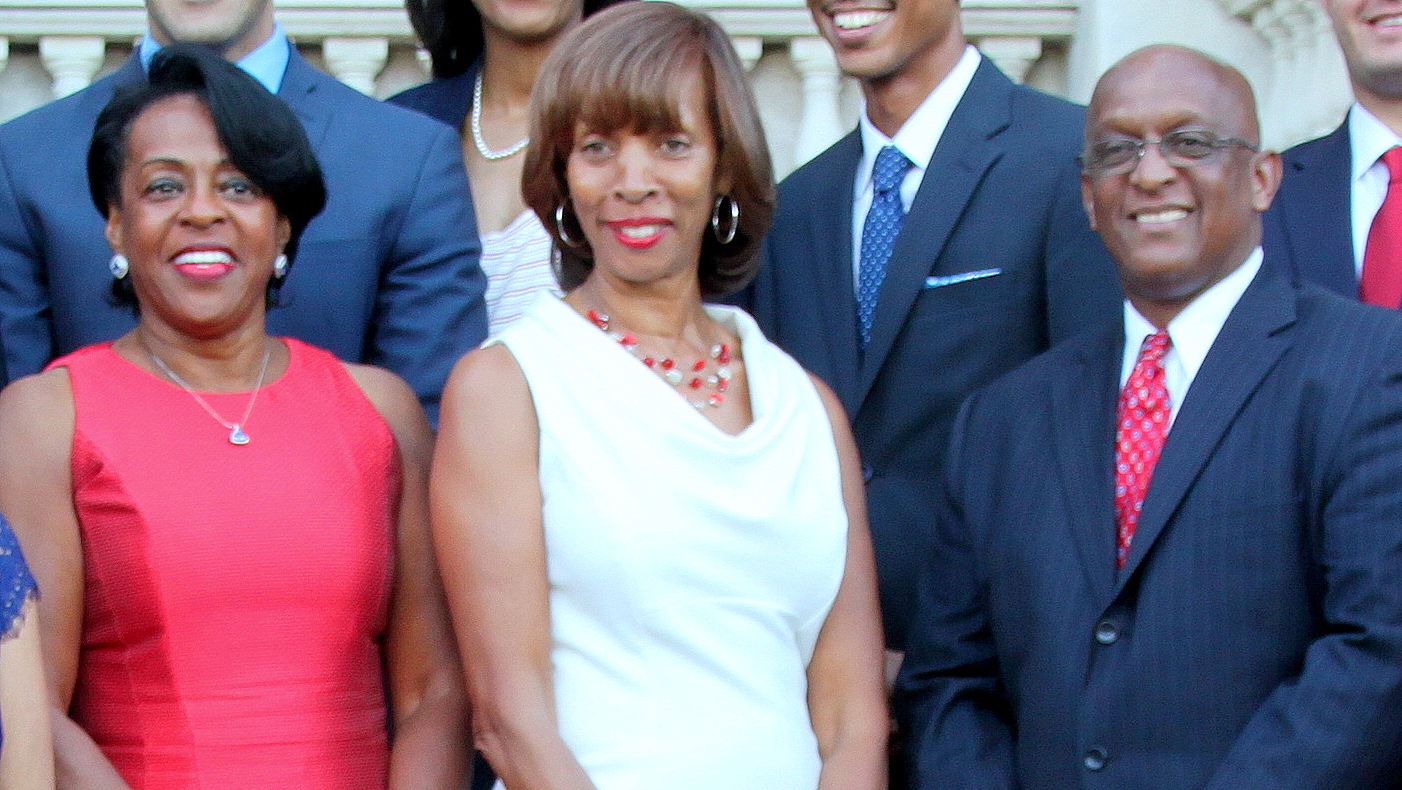 Differing Views of the Job

One of the three positions elected by citywide, the comptroller is Baltimore’s independent financial watchdog. Among the office’s responsibilities is conducting audits of city agencies and making recommendations to root out waste.

“The comptroller’s responsibility is to make sure that the agencies are operating effective and efficiently,” Pratt said on WYPR’s Midday with Tom Hall, in an interview featuring both candidates. “We make sure the city isn’t spending more than it should.”

“With new auditors, we will make sure that the city is operating effectively and efficiently”  – Joan Pratt.

Henry disputed Pratt’s view of the office, saying she has never gone beyond the bare minimum of her duties as comptroller.

“She’s laid out most of the mechanics,” he said, “but I think a lot of what’s been left out is the proper attitude. To be a watchdog, you have to be proactive.”

During the WYPR interview, Henry pushed Pratt on the inability of the Department of Public Works to properly bill large water consumers in the city.

Pratt replied that her auditors have routinely found that DPW underbills some consumers. But she cautioned that her job was to make recommendations, and stressed that she can’t force other agencies to take action.

“It shouldn’t be something where you wait for the mayor to get embarrassed by a news story and call for an audit to cover up the fact that the Department of Public Works works for the mayor,” Henry replied.

Pratt, who claims on campaign mailers to have “generated $31.4 million in revenue or savings” for the city, says that having a good working relationship with the mayor is the best way to get things done.

“The administration has given the comptroller’s office a budget to hire new auditors, and with new auditors we will make sure that the city is operating effectively and efficiently,” she said.

As a member of the City Council, Henry has pushed to make the office more effective, including giving subpoena power to the city auditor.

As comptroller, Henry says he would increase public access to the Board of Estimates, where the comptroller serves as both board member and board secretary.

The BOE is known for its archaic procedures and lack of online access to city contracts and bid documents.

Day-to-day operations have been run for decades by Pratt’s deputy, Bernice H. “Harriette” Taylor, until her surprise retirement on April 1.

Henry promises to modernize board operations and post more documents and data online. “That’s what the comptroller is there for, the objective public advocate, pushing for openness and transparency,” he told The Brew.

BELOW: WYPR interviews Pratt and Henry.