State leaders in Annapolis have announced a police accountability initiative in the wake of worldwide protests following the death of George Floyd in Minneapolis, but some reform advocates are skeptical of the effort.

One reason for their tempered expectations: the group formed by the House Speaker Adrienne A. Jones includes at least seven members who have accepted campaign contributions from police unions.

The Brew’s review of records on file with the State Board of Elections traced more than $20,000 in police union contributions to members of the Workgroup to Address Police Reform and Accountability in Maryland.

One delegate who took police money is the group’s chair. Vanessa E. Atterbeary, a Howard County Democrat, received $4,750, most of it from the Howard County Police Officers Association PAC.

Another work group member, Delegate Curt Anderson, of Baltimore’s 43rd District, has accepted $2,500 from the Baltimore City Fraternal Order of Police PAC. Anderson was previously in the news when he was stripped of his committee assignments following a 2018 investigation into multiple allegations against him, including an alleged sexual assault the panel was unable to confirm.

As for Jones herself, she got three checks, totaling $3,000, from the Baltimore County FOP Lodge 4 PAC last year after she became House speaker.

And Luke Clippinger, the House Judiciary Committee chair who announced the formation of the work group with Jones, received $1,000 from the city FOP.

Some reformers are calling on state and local political leaders to reject or return Fraternal Order of Police contributions, especially in light of recent public outrage over videos showing in-custody deaths.

“It is concerning that any politician in this day and age takes money from them [police unions],” said Charly Carter, founder of Step Up Maryland and the former founding director of Maryland Working Families.

“They’ve been a consistent roadblock to even some of the incremental reform that we’ve tried to make at the city level,” Carter said.

Earlier this month, Clippinger told The Brew that he would not take any more FOP contributions. Jones did not respond to several requests for comment on her acceptance of FOP donations.

UPDATE 6/30/20: Delegate Sandy Rosenberg says he will not accept any money from FOP or other police union groups going forward.

This past history of rebuffing reform efforts year after year is what leaves state Senator Jill Carter skeptical about the prospect for meaningful change coming out of the General Assembly now.

Asked about her expectations for the legislative group, Carter – who is not a member – laughed and said, “Nothing.”

Announced in May amid protests against police brutality and systemic racism that drew thousands in Baltimore, the workgroup held its first meeting last week.

But proposals to require disclosure of more information on investigations and complaints against officers have failed in the House of Delegates multiple times in recent years.

Advocates argue police would be more accountable with the repeal of the Law Enforcement Officers’ Bill of Rights and the passage of Anton’s law, named for Anton Black, who was killed by police on the Eastern Shore in 2018.

“Anton Black didn’t move the legislature to do anything, and he died right here in Maryland,” said Carter, who represents Baltimore’s 41st District. “Before George Floyd and before Freddie Gray, we had multiple families coming to Annapolis pleading their cases.”

Speaker Jones and Senator Will Smith, of Montgomery County, made similar proposals this month, both calling for greater restrictions on the use of force and other changes.

The work group is not the only panel in Annapolis charged with police reform. A Commission to Restore Trust in Policing, formed following the revelations of corrupt actions of Baltimore’s Gun Trace Task Force, is set to end its work in 2020.

Carter agreed that lawmakers should reject money from police unions on principle, though she also said the fact of having accepted it doesn’t necessarily mean one is beholden.

Jones appointed 14 members to the group – four Republicans and 10 Democrats, among them Anderson, first elected to the House of Delegates in 1983 and the chair of the Baltimore City delegation until he was replaced in 2018.

The five Democrats who accepted $19,200 in donations are:

(Prior to being elected to the legislature in 2014, Jackson was the sheriff of Prince George’s County. And before that, he was president of FOP Lodge 112 representing deputy sheriffs in P.G. County.) 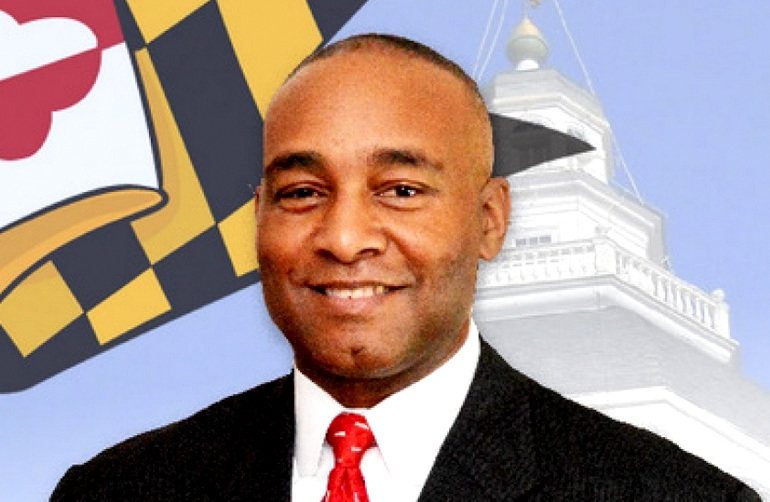 Delegate Michael Jackson, who picked up by far the largest FOP contributions, was both the sheriff of P.G. County and the onetime president of FOP Lodge 112. (Bing)

The two Republicans accepting $950 in donations are:

So far, none of the work group members receiving contributions has responded to The Brew’s request for comment.

Charly Carter expressed optimism that several of the group’s young reformers, such as Gabriel Acevero of Montgomery County and Wanika B. Fisher of Prince George’s County, will be able to move the needle on police reform.