On a route that took them past shelters, hotels and the city jail, protesters marched through downtown Baltimore demanding that the city halt its plan to return people to shelters amid the continuing Covid-19 pandemic.

Alexis Garnett, a 22-year-old homeless woman who lives at the Fairfield Inn, which now houses homeless people moved from the Pinderhughes shelter, said it would be devastating to return to a less safe congregate shelter.

“Staying at the old Pinderhughes was traumatizing, especially during Covid,” Garnett said yesterday, speaking through a microphone in front of the hotel on President Street. “New people came in everyday, we were bunched up living together, and were not six feet apart.”

“I remember listening to the news that we must practice social distancing, asking myself, ‘Am I going to get sick? Am I going to get Covid?’” she said, addressing the crowd of more than 100 homeless people, advocates and other supporters.

The “March for Housing,” organized by Housing Our Neighbors, was the advocates’  latest effort to press city leaders to do more to help people who are housing insecure during the pandemic, including providing permanent housing and halting evictions.

This past week, lawyers representing tenants in rent court eviction cases told The Brew that over 400 evictions had been carried out in Baltimore since August, as the financial impacts of the pandemic have slammed essential workers and others in Baltimore. 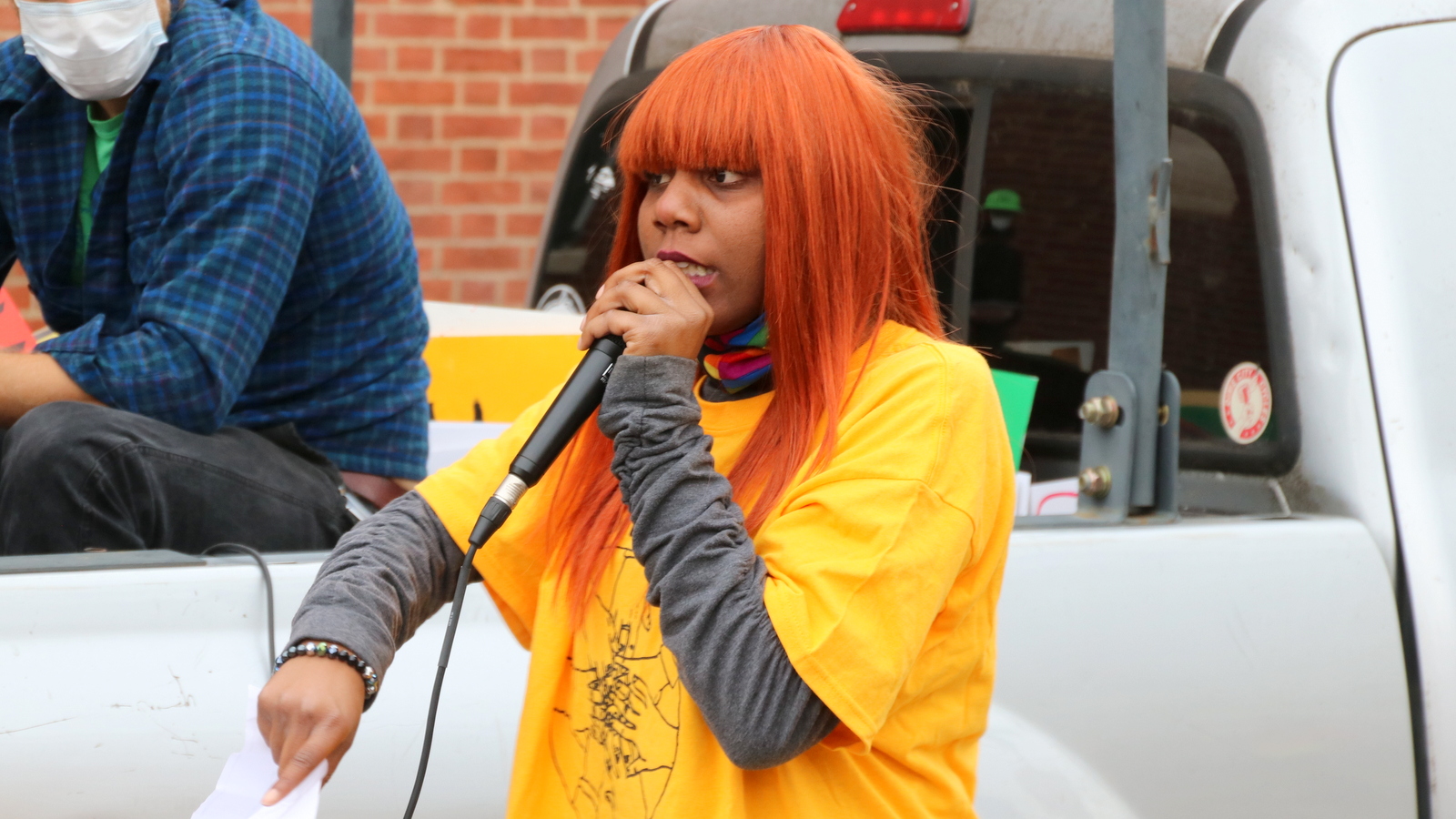 “We can afford to do better”

Some of the protesters carried signs that said “Cancel rent” and “Homes, not hospital beds.” At points, they chanted, “Rent court, rent court, is the worst – time to put the people first.”

Garnett said staying in the hotel has not only seemed safer – it has give her a feeling of hope she could get back on her feet and find permanent housing.

“Getting housing here was so uplifting for me,” she said. “It made me feel like I had an opportunity to be successful again.”

Councilman Ryan Dorsey also addressed the crowd, saying that the city is “failing its homeless population” as long as it fails to find permanent housing for each person facing housing insecurity and homelessness.

“The city is planning on putting people right back in the place they were taken out for safety reasons. How in the hell can they do that?”  – Mark Council, Housing Our Neighbors.

Speaking afterwards to The Brew, he said lack of resources is no excuse: “We can absolutely afford to do better.”

“One thing I think people need to be aware of is that just 10% of the Baltimore Police Department’s budget, which is the largest per capita in the country, would be enough to provide every homeless person in Baltimore city $2,000 per month for the whole year,” he said.

Organizer Mark Council, of Housing Our Neighbors, questioned why the city would put people back into congregate shelters that were cleared out in April due to concern about Covid-19 transmission.

“The city is planning on putting people right back in the place they were taken out for safety reasons. How in the hell can they do that?” Council asked. “We’re not going to let that happen. This is a desperate cry for help.” 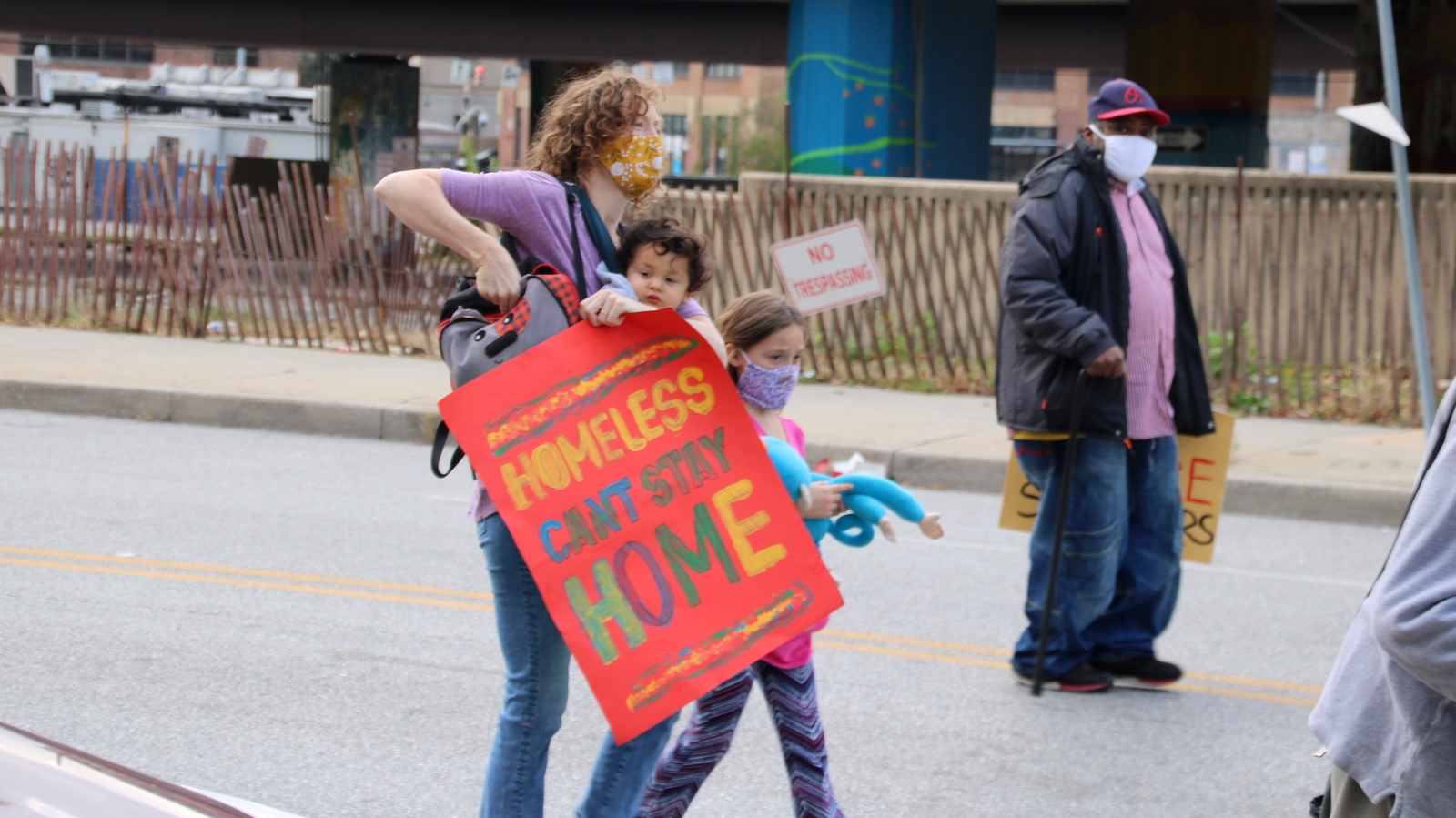 Protesters said that with Covid-19 cases surging, homeless people should not be returned to shelters. (Louis Krauss)

“Doing all that we can”

After walking past the Fairfield Inn, Health Care for the Homeless, the Weinberg Housing and Resource Center, and the Department of Corrections Central Intake and Booking, the marchers ended up at City Hall.

Among their demands, in addition to a halt to the plan to fill congregate shelters, the protesters want Young to sign City Council bills 20-0592, a locally funded housing voucher measure, and 20-0625, the renters right to counsel bill.

City officials had said in an October 27 online meeting, that they were planning to move hundreds of homeless people from hotels protecting them during the pandemic.

Contacted by The Brew, a spokesman for Mayor Bernard C. “Jack” Young’s, James Bentley II, later said the city “has not officially determined a date to move residents out [of] the hotels” and “are assessing next steps, which is based on many factors.”

Bentley added that the city is continuing to move eligible people from the hotels into more permanent housing, and said that 179 formerly homeless people have been given housing since the start of the pandemic in March.

Tisha Edwards, acting director of the Mayor’s Office of Homeless Services, said earlier this month that there are still beds available in hotels for homeless people, and the city is encouraging people living on the streets to take advantage of it.

“Mayor Young and I are committed to supporting our homeless neighbors that live in the nine encampments across the city, including those residents in the Fallsway encampment,” Edwards wrote.