Mayor Brandon Scott plans to distribute about 200,000 of the recycling carts free of charge “to every eligible city household this spring.”

Scott’s office describes the program as a “$9 million public-private partnership, including a $3 million grant from The Recycling Partnership.”

The Partnership, funded by the American Beverage Association and companies like Coca Cola and Amazon, subsidizes recycling cart programs, recycling education campaigns and other initiatives for municipalities.

A spokeswoman for Scott told The Brew the city will contribute $5.5 million to purchase the carts “and is looking into options for additional private financing.”

“Eligible city households include residential properties who receive trash removal or recycling pickup services from the city, as opposed to those who have private recycling services,” press secretary Sydney Burns said.

The quasi-public Baltimore Civic Fund will act as fiscal sponsor for the project.

Critics have long pointed to the irony of Baltimore, a city that officially embraces the goal of Zero Waste, running a recycling program that requires residents to pay for the official yellow plastic recycling cans and bins.

With the Department of Public Works charging $12 for the 25-gallon cans and $3 for the lids – not to mention canceling curbside recycling pickup completely for nearly five months, citing the coronavirus pandemic – recycling in Baltimore has been a challenge.

Recycling resumed in January at a cost of $7 million for five contractors – two small haulers and three workforce development groups.

At a January news conference, Scott also pointed to last year’s $790,000 investment in routing software for garbage trucks. And he noted that the city has begun weekly multi-agency “RecycleStat” meetings to monitor progress.

“This is a positive step, but just one of many, many things that need to happen”  – Greg Sawtell.

Baltimore’s last trash can give-away came during the Rawlings-Blake administration, when residents were provided with the wheeled green “smart” trash carts, with attached lids and RFID chips. 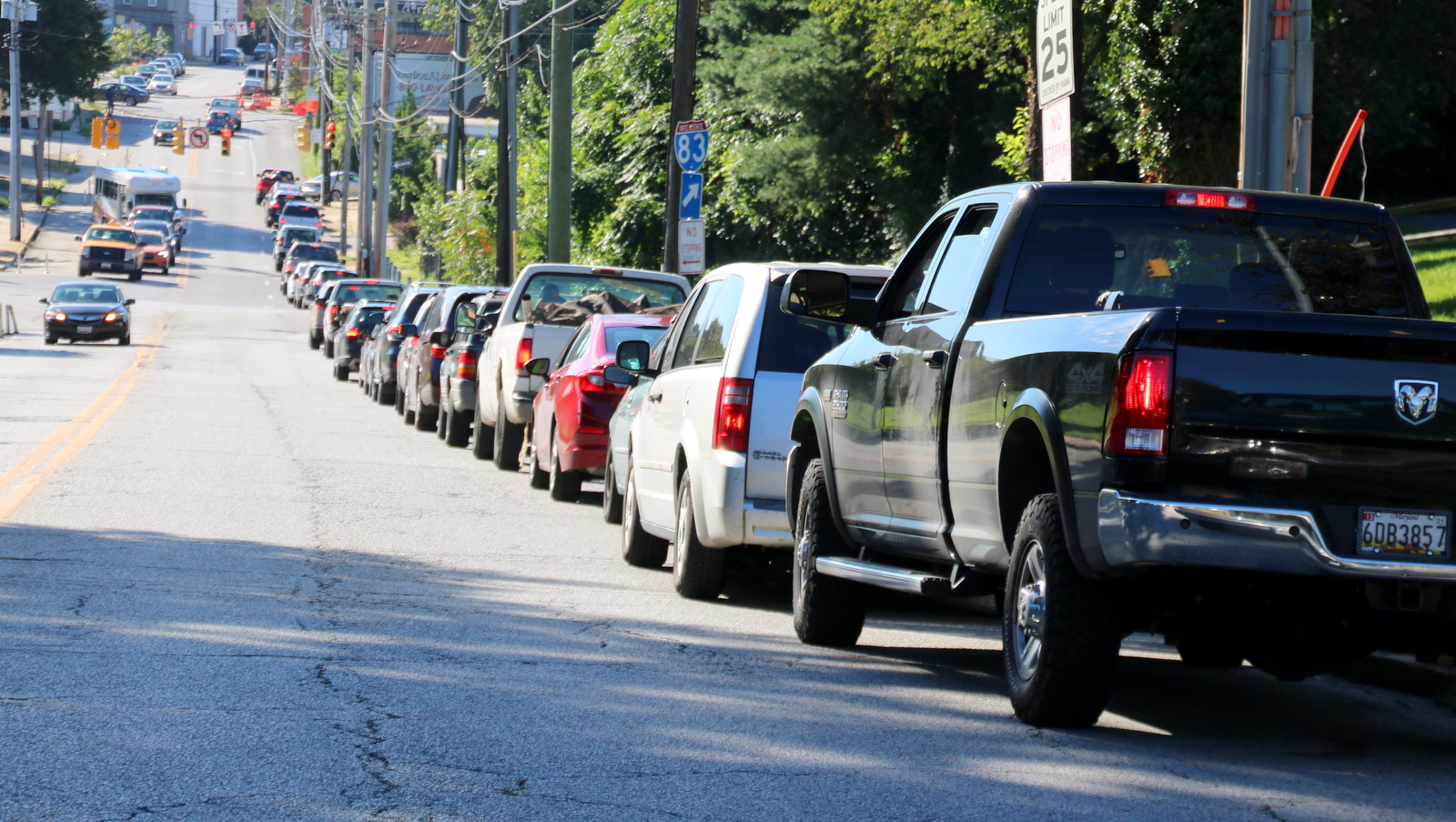 Vehicles wait to get into Baltimore’s Sisson Street drop-off center, after curbside recycling collection was suspended in August. (Fern Shen)

Scott has been under pressure to improve recycling not just from citizens who want it hauled away at the curb, but from environmental and community activists who want solid waste diverted from Baltimore’s polluting BRESCO incinerator.

As mayor-elect, Scott was criticized for failing to push back against the move, reversing a position he took during the mayoral campaign.

But he pledged at the time that under his leadership, the city would act aggressively to meet Zero Waste goals which include increasing recycling in Baltimore, where the recycling rate lags at about 15%.

“I will work my butt off to make sure that this is the last time we ever give them [Wheelabrator] a new contract,” he said.

The city pays to burn about 130,000 tons of residential solid waste at Wheelabrator Baltimore annually. Scott’s administration recently set an interim goal of diverting 180,000 tons of solid waste from the incinerator by 2024.

Activists applauded both the setting of a hard goal for diversion and the future distribution of free recycling carts, a step residents have called for.

“It’s been shown that when you give people the tools, they recycle more,” said Greg Sawtell, of the South Baltimore Community Land Trust. “This is a positive step, but just one of many, many things that need to happen.”