The same contractor who built curbs that barely rose over repaved Roland Avenue a few months ago is now tearing them out and building higher replacements – at a cost of nearly $1 million in city and federal funds.

Ever since M. Luis Co. started work on the historic boulevard between Cold Spring Lane and Northern Parkway, there have been complaints that either the curbs were too low or the street surface was too high.

Some homeowners say they have experienced unprecedented flooding in the wake of the road’s reconstruction – a far cry from the advertised benefits of the $3.5 million streetscape program approved by the Board of Estimates in 2012.

During a downpour on August 24, Barbara Marx Brocato said her house was surrounded by six inches of water. 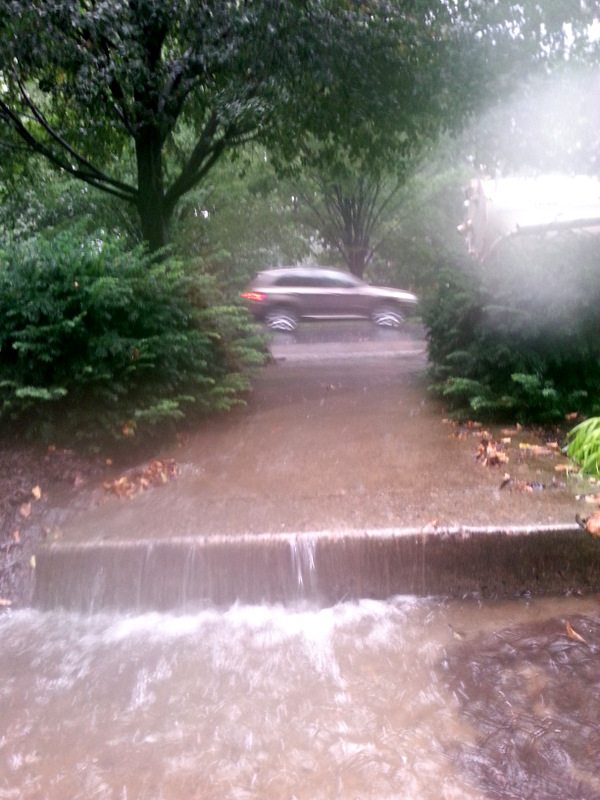 “We suffered damage to our garden and basement. It was the worst flooding in the 31 years we’ve lived here,” she said.

After watching water cascade into her front walkway from Roland Avenue during several storms, she blamed faulty engineering.

“When they redid the road, the slope of the asphalt – as well as the lack of decent curbing – just [directed] the water into my yard and my two neighbors’ yards,” she said.

City regulations call for curbs between 4 inches (minimum) and 6 inches (maximum) in height. Along some sections of Roland Avenue, the new curbs are barely ½ inch higher than the asphalt.

Responding to complaints from residents and the Roland Park Civic League, the city Department of Transportation has ordered M. Luis to replace 16,200 linear feet (more than three miles) of curbs and gutters between Cold Spring Lane and Deepdene Road.

Paul Goldbeck, the project engineer, told the Civic League that the contractor will work six-day weeks, from 7 a.m. to 4 p.m., to try to finish the repairs within 45 days. 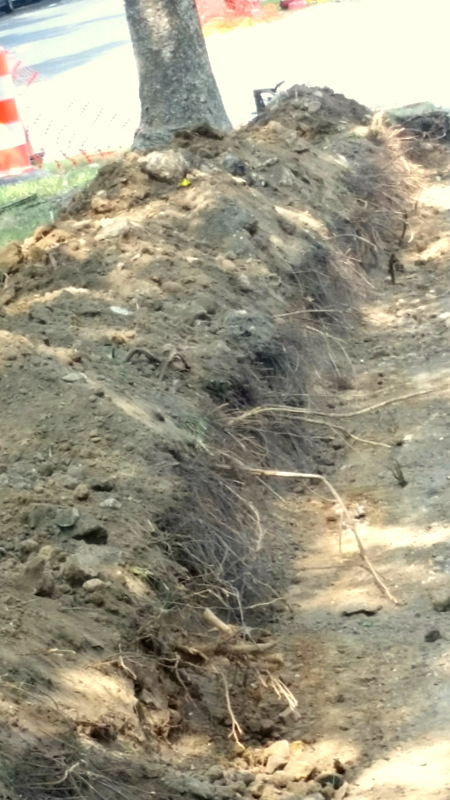 The decision to replace the curbs was made after DOT had told the community that the paving work was 90% complete.

Kathy Dominick, a DOT spokesperson, said the city, not M. Luis, will pay for the curb replacement, estimated at $900,000.

She said federal transportation funds allocated to the city will help pay for the overrun.

Asked why the project was considered nearly complete before DOT realized that the curbs were too low, she answered in an email, “The existing curb heights needed to be raised in order to address drainage issues discovered after construction had started.”

Chris McSherry, president of the Civic League, said DOT initially blamed the community for asking for new curbs that matched the height of existing curbing.

This argument gave way, she said, to the suggestion that the original engineering design was flawed. M. Luis argued that it had followed the contract’s specifications and did not raise the level of the surface asphalt during repaving.

Late last week, Roland Avenue returned to active construction mode as  subcontractors sawed out the curbs, and M. Luis crews dug trenches along the center median strip to lay the foundations for the new curbs.

Although the digging cut through and exposed the roots of trees on the median strip, Dominick said in an email to The Brew that “trees and roots should not be affected by this work.”

A Series of Snafus

The Roland Avenue rebuild is one several examples of managerial shortcomings at DOT in recent years. 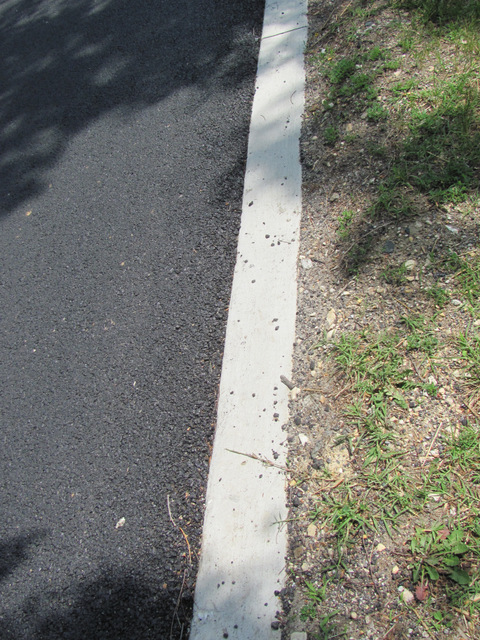 Example of curbing on Roland Avenue that is flat against the asphalt. (Photo by Mark Reutter)

The agency suspended its speed camera program 2½ years ago after the cameras showed a high rate of inaccurate readings.

After spending millions of dollars terminating a contract with a new vendor and hiring consultants, DOT still has not restarted the program.

Charm City Circulator buses managed by DOT have racked up more than $11 million in deficits, and the agency spent $6 million to buy poorly functioning hybrid buses, according to a recent consultant’s report.

Former DOT division manager Barry Robinson will soon go to prison after pleading guilty to taking $90,000 in bribes while the Circulator’s boss.

Operationally, the agency has had a mixed record under William Johnson, who was appointed director in 2013 after former director Khalil Zaied was promoted to the new position of deputy mayor of operations.

For example, a subgrade crack under Dundalk Avenue, found two year after reconstruction of the road began, has resulted in a $3.4 million cost overrun.

Another high-profile project, the $25 million rebuilding of North Charles Street, is crawling to completion, while the much-touted bikeshare program has yet to make its debut.

On Friday, DOT opened West Covington Park in South Baltimore after surrounding the facility with a metal fence for months.

Some residents of Northeast Baltimore expressed shock when DOT recently cut down trees on the historically protected median strip of 33rd street.

The agency said the tree removal, to make way for a new turn lane onto Loch Raven Boulevard, was approved before the City Council passed the historic designation last March. 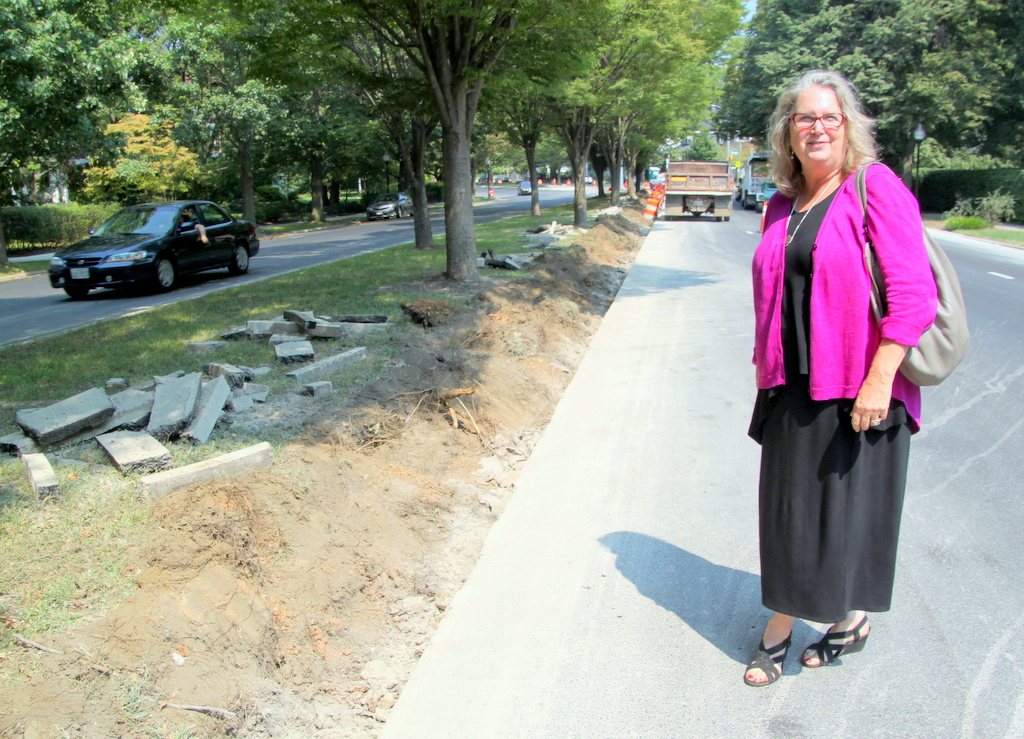 Barbara Marx Brocato stands on Roland Avenue near where her property has been repeatedly flooded with runoff from the street. (Photo by Fern Shen)