Mayor Stephanie Rawlings-Blake and Board of Estimates yesterday awarded $4,881,647 to seven consulting firms who were asked to take the lead in various projects and studies, some mundane, others potentially profound.

The contracts were approved by voice vote during a meeting that lasted three minutes (9:06-9:09 a.m.) at City Hall.

The lone dissent came from City Council President Bernard C. “Jack” Young, who registered his “no” votes with the board clerk but, in keeping with BOE protocol, did not offer an explanation for his opposition at the meeting.

The reasoning behind his votes, spokesman Lester Davis said, was that these projects and studies should be done by city personnel (there are 14,017 of them on the payroll, according to on-line records).

“We have professionals on board at city agencies who have a lot of experience,” Davis said. “Jack believes you should first look inside the agency and not be too quick to look outside.”

Young has frequently voted against outsourcing, but his efforts have been to no avail when the mayor controls three of five BOE seats.

The single biggest “call in the consultants” request came before the spending board in 2013.

The Department of Public Works said it needed $27 million to pay three consulting firms to help it comply with a 2002 consent decree with the Environmental Protection Agency (EPA). 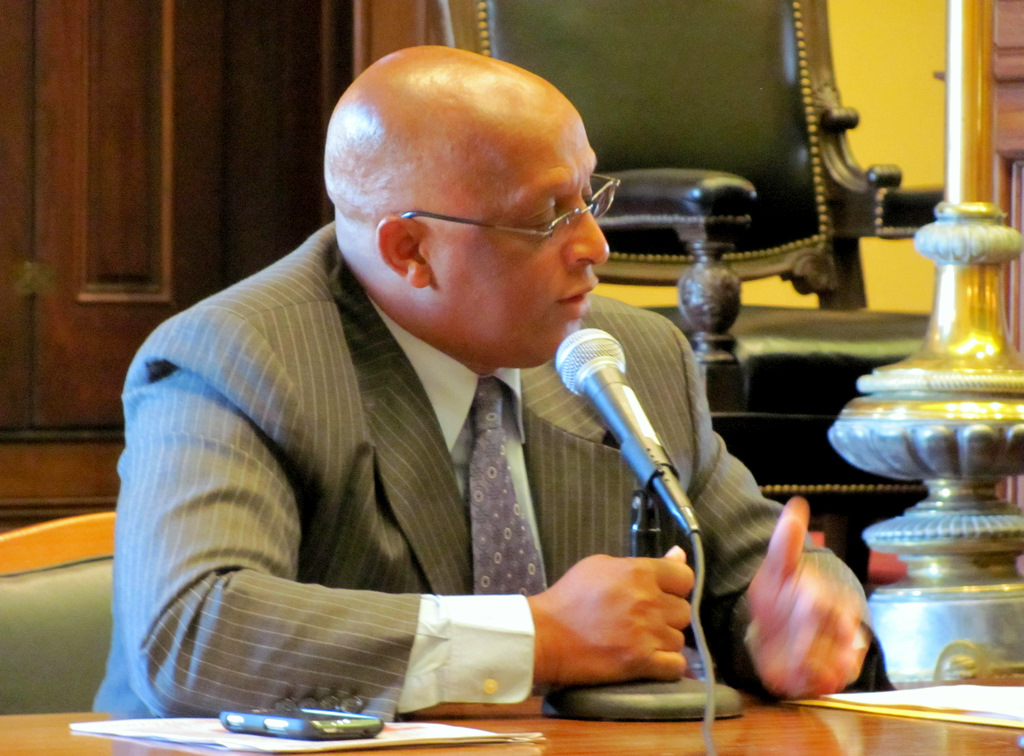 Young and City Comptroller Joan Pratt voted against the expenditure – which was not part of the fiscal 2013 budget that underwent public and City Council hearings – while Rawlings-Blake and her appointee, City Solicitor George Nilson, approved.

No Conflict of Interest

The tie was broken by the mayor’s other appointee, then-DPW director Alfred H. Foxx, who voted in favor of a request made by his own agency.

Solicitor Nilson and other officials found no conflict of interest in Foxx’s vote. Put simply, the mayor rules.

Has doing out money to consultants helped the city comply with the Clean Water Act and other laws?

A December report by the Environmental Integrity Project documented the stream of raw sewage that is still dumped into the Jones Falls during heavy rainfalls, whereupon it empties into Baltimore’s iconic (and sometimes openly smelly) Inner Harbor.

Despite the millions of dollars awarded to consultants, Baltimore recently failed to meet the federal deadline to comply with the consent decree.

The deadline was January 1, 2016. City Hall is now counting on a forgiving EPA to extend the compliance date to 2019 or beyond. So far, there’s been no decision from the feds.

Advice but no Consent

One of the firms that shared in that $27 million award, Louis Berger Water Services, was handed $322,958 yesterday to assist another city facility that has been negligent in complying with Clean Water standards. 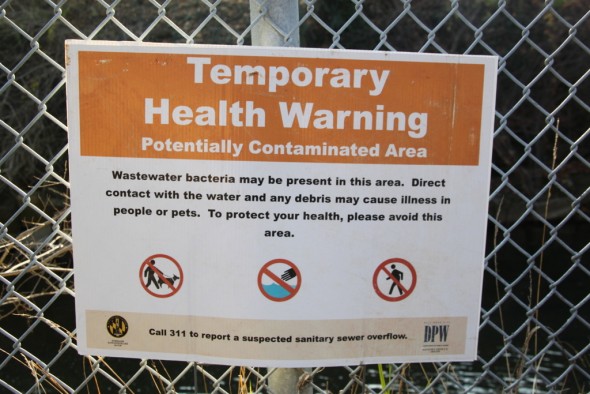 Consultants notwithstanding, sewage is still flowing into the Jones Falls, and the city has missed the deadline to stop it. (Fern Shen)

Berger will be doing “field inspections, code compliance and recordkeeping” at the Patapsco Wastewater Treatment Plant – just the kind of duties that Young says could and should be done by city personnel.

Last year, Berger Water was handed $130,000 to provide the city Department of Transportation (DOT) a report on how to fix the financially-challenged Charm City Circulator.

But faced with an outcry by some residents, Mayor Rawlings-Blake ignored the report’s advice and instead took $2.9 million out of a capital reserve fund to keep the bus route afloat.

The latest on the consultant report front is that Los Angeles-based AECOM got $1,001,110.65 yesterday to conduct a study advising DOT how to rehabilitate or replace the aging Hanover Street Bridge.

A lot will be riding on the study’s findings, as The Brew reported in December. The fate of the bridge has major implications for the future of the Middle Branch, a fairly unblemished urban estuary.

One of the tasks outsourced to AECOM amounts to policy decisions about how the bridge “can best meet the needs of residents, businesses and commuters” across South Baltimore.

A key observer of such decision-making will be Under Armour and its CEO, Kevin Plank, who have purchased large tracts of land for UA’s Port Covington headquarters and Plank’s projected waterfront community in Westport.

In the coming months expect a lot of back-and-forth between AECOM, Under Armour, and Plank’s real estate company over the bridge’s future that, if handled directly by DOT, would require public disclosure and, possibly, City Council hearings. 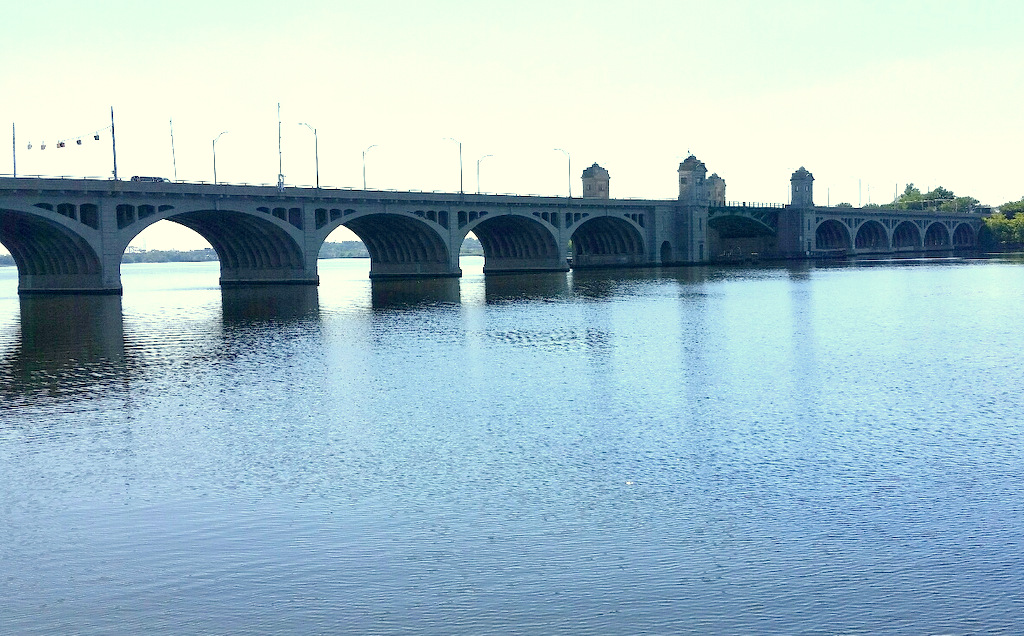 Consultants will be trampling around the century-old Hanover Street Bridge to determine its future. (Mark Reutter)

• $1.5 million to Gannett Fleming to provide architectural services to the Department of Recreation and Parks. The Pennsylvania-based consultant has been the “go-to guy” at Rec and Parks for years.

• $559,083 to Whitman, Requardt & Associates to offer design ideas to DOT for a new Perring Parkway off-ramp to Northern Parkway.

• $186,825 to Sabra, Wang & Associates to submit construction documents to the Department of General Services for a replacement roof at the Courthouse East building downtown.

Sabra, Wang has been especially busy in recent months. Not only did it help DOT put the finishing touches on the Roland Avenue cycle track, but it is also the author of the $140,000 feasibility study of reintroducing two-way traffic on Calvert and St. Paul streets.

Yesterday Sabra, Wang got still another task courtesy of the Board of Estimates. It will serve as a $139,894 “disadvantaged business enterprise” consultant to AECOM on the Hanover Bridge study.