A group of people, selected by Mayor Catherine Pugh to advise her new(ish) administration on the issue of homelessness, gathered in a City Hall conference room yesterday.

Amid the murmurings of these veteran meeting-goers – about “cross-walking the domains with priority themes” and “aligning without usurping the authority” of other entities- Jeffrey K. Hettleman’s voice suddenly commanded the room

“It seems to me we’re being asked by the leader of Baltimore to help give the vision and the pathway to address the problem,” said Hettleman, executive vice president of The Shelter Group.

“I don’t think we have to be necessarily bound by everybody’s role,” he said. “We get so caught up in the implementation challenges that we don’t effectively state the goals – that’s what’s been sorely lacking.” 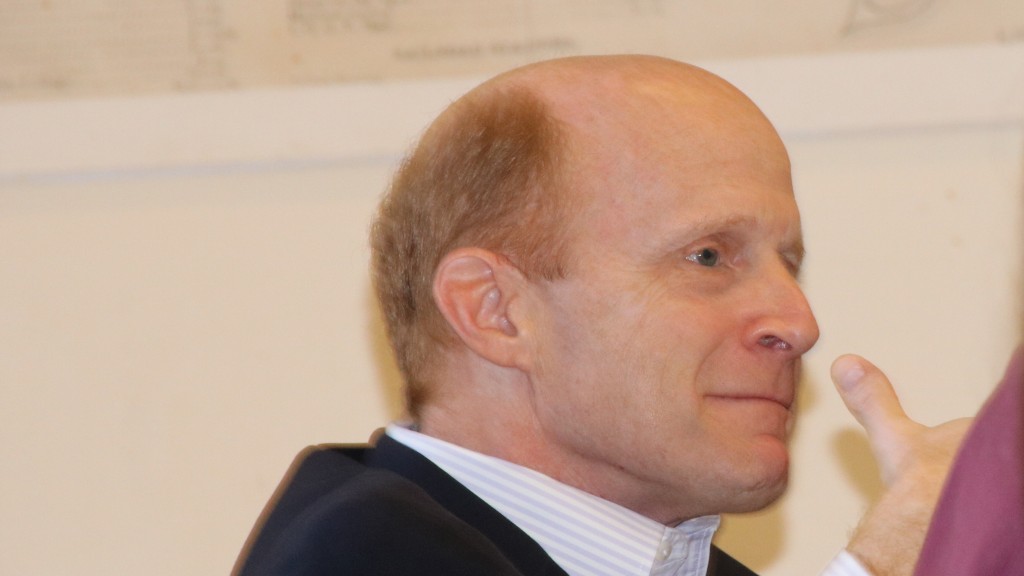 Jeffrey Hettleman, a member of the Mayoral Workgroup on Homelessness. (Fern Shen)

There was a smattering of applause from a couple of the members of the public who had come to watch the 2017 Mayoral Workgroup on Homelessness. But among the group members sitting around the table, there was a ripple of concern.

The role played by various groups has been a sensitive subject, with the Journey Home Board appointed by then-mayor Stephanie Rawlings-Blake often clashing with the so-called “Continuum of Care” group, which is granted authority under a 2008 federal housing law.

In November, by a close (38-30) vote, the Continuum group members rejected a proposal the mayor had encouraged them to consider – to have a private entity, instead of the Mayor’s Office of Homeless Services, manage homeless services for the city, distribute grants to providers and seek private funding.

In the room the day of the vote was Charles G. “Chuck “Tildon III, vice president of United Way of Central Maryland, which had expressed an interest in getting the management contract. And sitting with him was, in Democrat-dominated Baltimore, the de facto next mayor – primary winner Catherine Pugh.

A Death and an Encampment Clearing

The possible privatization of city homeless services is just one of the background concerns as the Workgroup begins its task – to come up with recommendations for Pugh in 60 days.

Her administration has had a bumpy start on the issue.

The week after Pugh was sworn in as mayor, a homeless man, Lawrence Alexander, was found dead beside a bus bench just outside of City Hall.

Although candidate Pugh earned praise from advocates for stressing the need to get homeless people into permanent housing, she disappointed them in her State of the City speech. What she described – her idea for a state-of-art facility with beds, showers, a cafeteria and area for mental health services and drug treatment – was essentially another shelter.

And in March, as her first public act on the homelessness issue, she ordered the clearing of an encampment of people living in tents along Martin Luther King Jr. Boulevard. 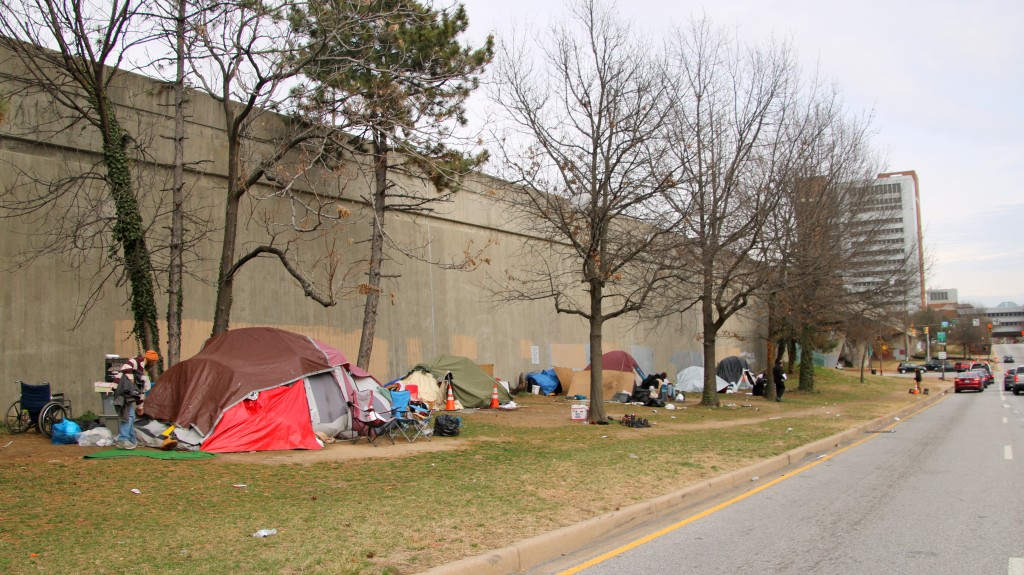 Homeless camp alongside Route 40, near Martin Luther King Jr. Blvd. The area has been cleared and is now fenced off. (Fern Shen)

Terry Hickey, director of the Mayor’s Office of Human Services, said at the time that the encampment residents would be housed at a hotel and helped with services and permanent housing.

Yesterday he provided this update:

“Three individuals have completed all required steps and were approved for housing vouchers. They will be housed as soon as soon as suitable units are secured,” he wrote in an email.

“Two individuals had previously been terminated from the HOPWA (Housing Opportunities for Persons with AIDS) program,” he said. “They have been reinstated and are actively participating in case management with a goal of permanent housing in the near future.”

One person voluntarily left the program, is not participating in case management and is no longer being housed at the hotel.

Asked by The Brew about reports that the encampment residents had been moved to a hotel outside the city further from needed services, Hickey said that was correct. He added “we are working closely with their advocates and service providers to keep them connected to resources.”

On Any Given Night

Along with this recent history, the Workgroup is challenged by the basic problem facing the city: roughly 3,000 Baltimore residents on any given night are sleeping in shelters or on the streets.

Walking to their meeting yesterday, members got a stark reminder of their task – there are people living in tents and makeshift shelters all around City Hall on sidewalks, in doorways and beside the elevated Jones Falls Expressway.

The encampments and people panhandling at intersections also pose a political problem for city leaders, who hear complaints about them from downtown residents, motorists and business interests.

“That housing is the solution to homelessness . . . that homelessness is structural, symptomatic of poverty and solvable and that clear city leadership on homelessness is essential,” he said. Additional themes were suggested.

Janice Miller, of the House of Ruth, noted that health and violence, rather than poverty, are sometimes the causes of homelessness. Youth homelessness needs to be addressed and the advice of city school officials should be sought, another said.

Several questioned how the group could move forward without an official city affordable housing plan or policy, something the Pugh administration has not issued. Also lacking at this point is Housing Department leadership with the departure of longtime Housing Commissioner Paul T. Graziano.

Learning from the Past?

Lindamood said the group begins its work recognizing that they are hardly the first to try and devise an effective action plan on homelessness for Baltimore.

“There have been many attempts – I think some of us have witnessed no fewer than seven or eight or nine over the last 20 or 30 years,” he said.

“Many of those groups have developed surprisingly similar recommendations and we should learn from them and not repeat the past,” he observed.

About 10 members of the public sat through the meeting> When their turn came to speak, several called on the Workgroup to be more inclusive and transparent.

Co-chair Molly Tierney noted that Damien Haussling, a Continuum of Care Board member who has experienced homelessness, is a member of the Workgroup but was not able to attend.

Asked how the public could have input on the Workgroup process, staffer Hannah Roberts said it plans soon to have an email citizens can use to submit ideas.

Meanwhile, the public can find information on the Workgroup’s meeting schedule (the deadline to complete its work is June 18), key documents and list of members here.