Advocates came out in full force to push Mayor Bernard C. “Jack” Young to do more to protect homeless people during the coronavirus pandemic, mounting a protest designed to capture media attention – and conform to the rules of social-distancing.

As Young stood in front of City Hall for his latest Covid-19 media briefing, Mark Council from Housing Our Neighbors stepped in front of the cameras, joined by other protesters carrying a sign that read “Homeless Can’t Stay Home.”

“We must put these people in permanent housing, not just hotels,” Council shouted. “You can’t fix the problem by housing people in a shelter or a school building.”

Young tried at first to talk over Council, but finally gave up and let him make his case, the same one they have been making for weeks since the outbreak struck:

A homeless man himself, Council said hundreds of other people in Baltimore are living on the street or in crowded shelters with no way to isolate themselves in order to avoid infection.

The deaf interpreter who had been using American Sign Language to relay Young’s remarks began to translate the protester’s words.

Young tapped the translator’s shoulder to stop him, issuing a curt warning: “You interpret for us!”

Not long after Council finished his plea for permanent housing, dozens of cars positioned around War Memorial Plaza honked their horns in unison to briefly drown out Young and the other speakers .

Each car honked its horn 32 times in total, to represent the 32 homeless people who have died from Covid-19 so far in New York and Washington D.C., according to Housing Our Neighbors member Rachel Kutler. 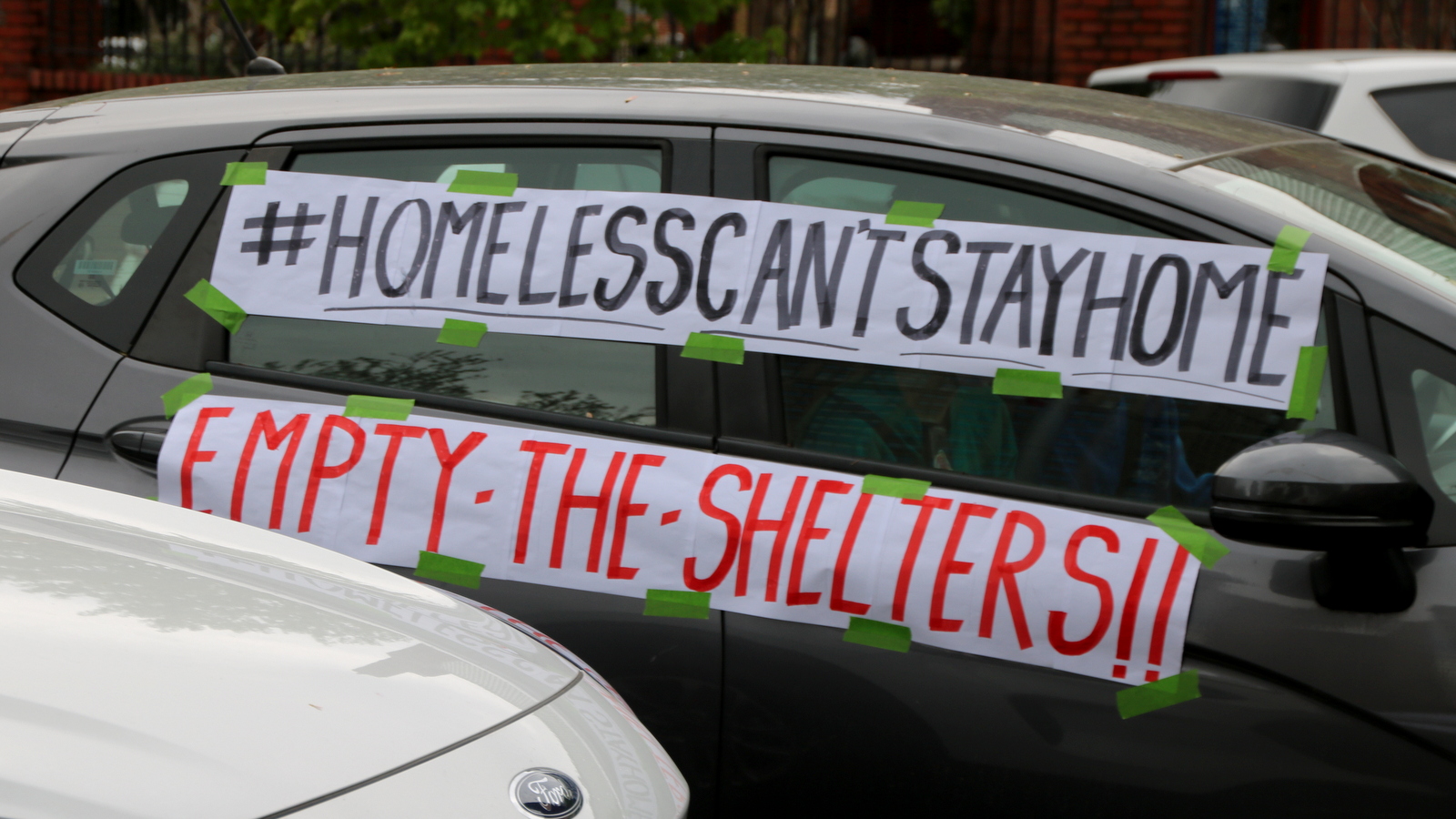 Protesters circled War Memorial Plaza, calling on Young to get people out of shelters during the coronavirus pandemic. (LouisKrauss)

In an update provided at today’s briefing, Young’s deputy chief of staff, Sheryl Goldstein, said the city has moved about 200 healthy homeless individuals over the age of 62 into hotels so far.

In total for Baltimore, there are an estimated 1,180 homeless individuals, including 800 who are in shelters, Goldstein said in an April 6 virtual public meeting.

Another 100 homeless people are isolated in a separate hotel because they either tested positive for Covid-19 or are awaiting results, Goldstein said.

That hotel has been maxed out and cannot add more, she added.

Goldstein expressed regret that the city is unable to house all those in need, saying “it’s the thing that keeps me up most at night.”

But staffing issues prevent them from doing more, she said.

“We need to have proper staffing support before we take on another site,” she said. “Everyone would prefer to have permanent supported housing for folks, but it would’ve been easier to solve without Covid-19.”

The city is looking at possibly adding more hotel rooms for the homeless, she added.

But Council argued that hotels are not enough, and that he believes the city has a sufficient supply of vacant housing they should use to provide permanent housing for all of the city’s homeless.

“The city has permanent housing for us all, I know it,” he said. “Now whether the city is willing to provide it is a different question.”