Batting aside a protest by the American Civil Liberties Union and four other groups, the Board of Estimates today approved the sale of $148 million in bonds for the Port Covington project in South Baltimore.

They took action after Colin Tarbert, president of the Baltimore Development Corp. (BDC), insisted that the original rationale of the development – to serve as the centerpiece for the new global campus of Under Armour – was never “contingent” or “relevant” to the financing package.

His assertion runs counter to prior statements made by billionaire Under Armour founder Kevin Plank, who purchased 235 acres of mostly vacant land at Port Covington as a private investment and then sought city TIF funds to underwrite his vision of a “city within a city” of glittering office towers, shopping malls, athletic facilities, a thermally heated lake and apartments for “creatives and millennials.”

“We literally can’t wait,” Plank said in 2016 newspaper and TV ads, arguing that the 10,000 jobs to be created at UA’s global campus would guarantee the success of the project.

More explicitly, a former executive at the BDC, Caroline Paff, told the Urban Design and Architecture Advisory Panel in 2016 that the global campus was “the key ingredient” to Port Covington’s success.

“That’s what was missing from those other proposals for Port Covington. That’s the driver of how this is going to happen,” Paff testified.

Since then, a struggling UA has put its headquarters expansion plans on indefinite hold, and last December Plank was ousted as its chairman and CEO.

Over the same period, the Port Covington project, now headed by former Plank lieutenant Marc Weller, has largely been in limbo as Amazon and other large companies have shunned the property as a potential site to build or lease. 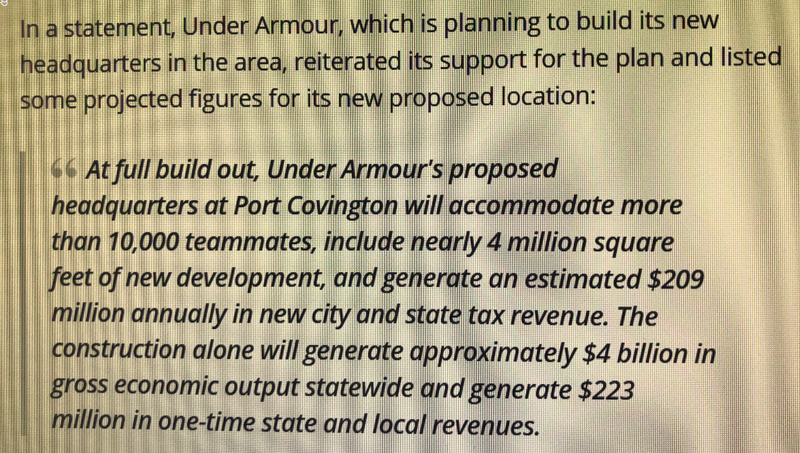 Big promises made by Under Armour in 2016. (UA press release)

Comptroller Joan Pratt today joined in the vote to approve the bond sale, but not before expressing concern that very little office space has been pre-leased.

(Out of an anticipated 1.1 million square feet of office, retail and apartment space for Phase One, only 39,595 square feet, or 3.5%, has so far been committed, according to a December 2019 report by city consultant MuniCap.)

The only “no” vote came from City Council President Brandon M. Scott,  who defeated Young and others in the June 2 Democratic primary and is in line to become Baltimore’s next mayor.

• Port Covington developer gave over $80,000 to officeholders and political committees

Scott complained that he only heard about the proposed bond sale last Friday.

While not directly questioning Young or the wisdom of issuing bonds during a pandemic and period of social upheaval and economic distress – which the ACLU said were reasons enough to postpone today’s vote – Scott said that he would seek future accountability.

Out of 1.1 million square feet of space planned for Phase One of Port Covington, only 39,595 square feet (3.5%) has been committed.

“Moving forward, I am going to hold everyone accountable to every dollar, every agreement and everything that we say is going to happen in this project because Baltimore cannot afford to have it fail.” 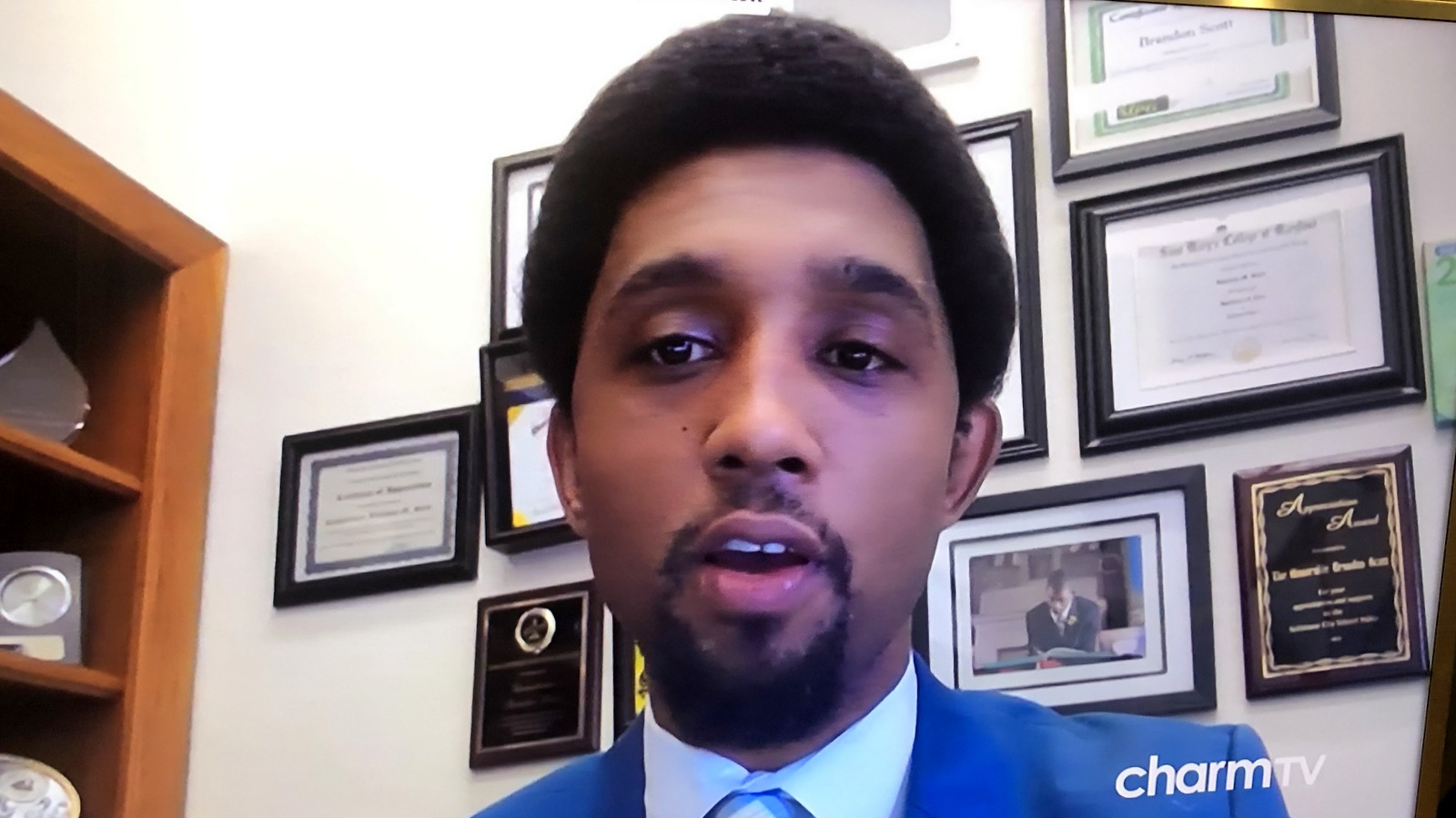 Young – who The Brew reported got $11,000 in campaign contributions from Weller and an assistant shortly before his administration prepared the initial TIF package last December – did not address the TIF expenditures during the virtual hearing.

Young did, however, express irritation at Charly Carter, executive director of Step Up to Lead, for not stating her name before she urged the board to delay its vote. (This despite the ACLU’s fair housing attorney Barbara Samuels having just introduced her by name.) 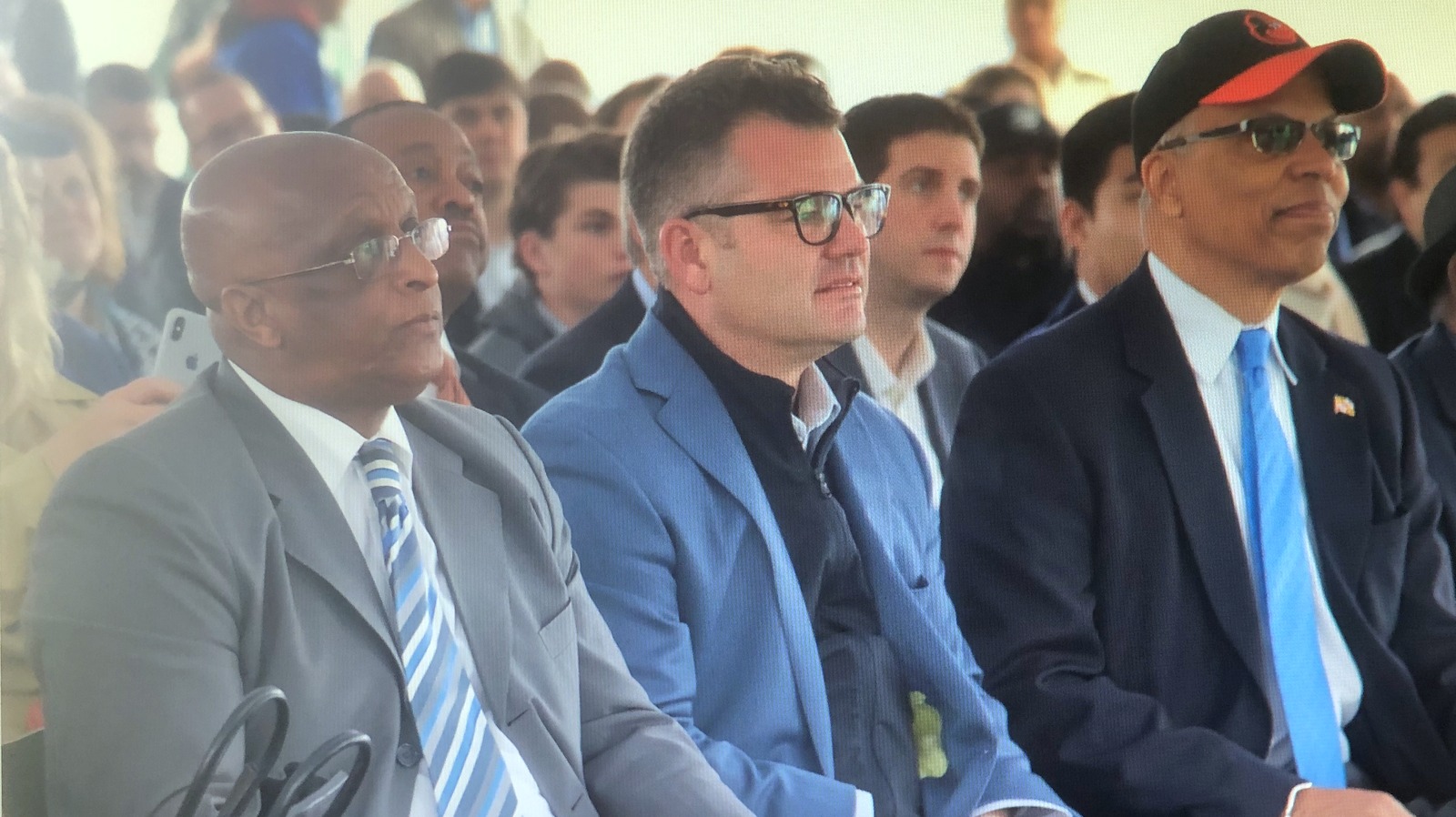 Acting City Solicitor Moore went after Carter and Samuels more directly, denouncing them for allegedly speaking for the community without its consent.

“It appears that they purport to speak for a community with whom they have not actually spoken,” Moore said, “and that very much weakens the protest.”

Moore was apparently reacting to Michael Middleton, executive director of Cherry Hill Development Corporation, who said the protest letter was not run past him before it was sent to the Board of Estimates.

“I am outraged that not one call has come to me to express the opposition to this letter,” said Middleton before he concluded, “I ask, take your knee off our neck.”

He went on to lavish praise on Weller Development, saying it has contributed $1 million to his organization as part of a community benefits package.

The protest letter by the ACLU, Step Up to Lead, Maryland Consumer Rights Coalition, Public Justice Center and Jews United for Justice did not purport to represent any specific community.

It did argue that approval of the TIF issue, benefiting wealthy businessmen hoping to build an upscale community for creatives and millennials, represents a poor choice “when there is such a need for investment in the city’s Black neighborhoods.”