After all that preparation – telling employees they could leave work early, ringing City Hall and police headquarters with at least 130 officers and barricading several downtown streets – city officials were confronted today with protesters who peacefully marched and prayed for Freddie Gray at War Memorial Plaza.

Police and the demonstrators stayed far apart at this afternoon’s protest in the shadow of City Hall.

As the crowd, which swelled to about 300, circled the plaza, Baltimore police stood watchfully at the front entrance to City Hall and across Gay Street near police headquarters.

Barricades were erected around City Hall on Holliday Street and in the 500 blocks of East Fayette and Lexington streets, obstructing rush-hour traffic.

The police were supplemented by Maryland State Troopers and officers from the Maryland Transportation Authority, the latter stationed in black SUVs parked along East Baltimore Street. 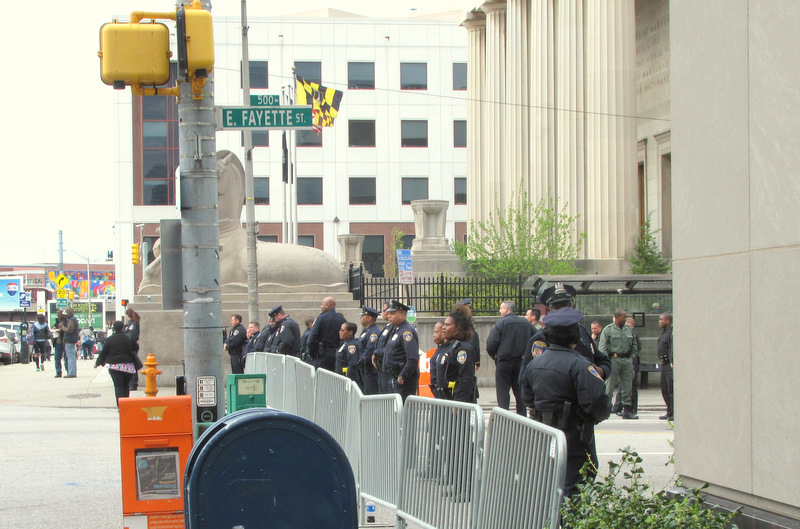 Two rows of officers stand behind a barrier at Gay and Fayette streets. (Photo by Mark Reutter) 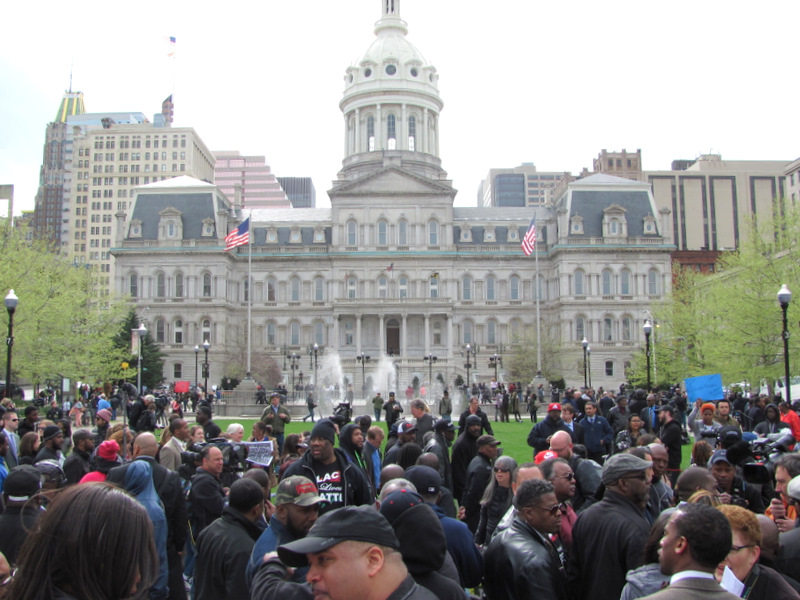 The crowd heard speeches from Rev. Jamal H. Bryant, of the Empowerment Temple, and others demanding answers about Freddie Gray, who died last Sunday after sustaining neck and back injuries while in police custody.

And there definitely was anger, as well as determination, expressed in the chants of “No justice, no peace,” “The whole damn system is guilty as hell” and “All night, all day, we will fight for Freddie Gray.” 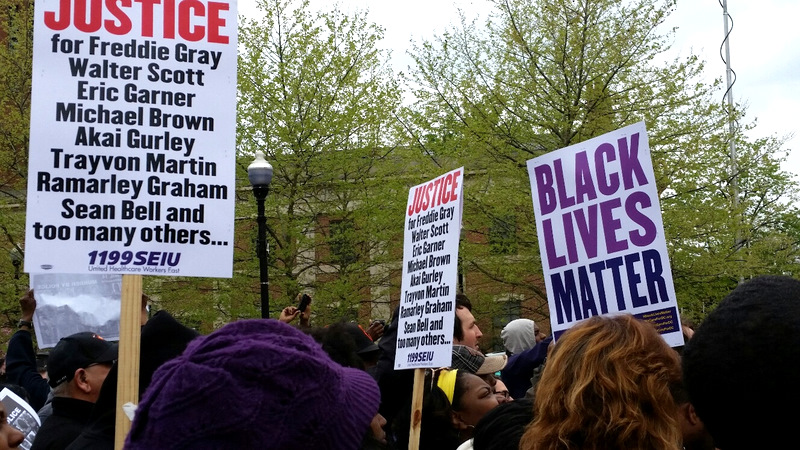 Freddie Gray is at the top of a list of African American men killed under controversial circumstances by police around the country. (Photo by Mark Reutter) 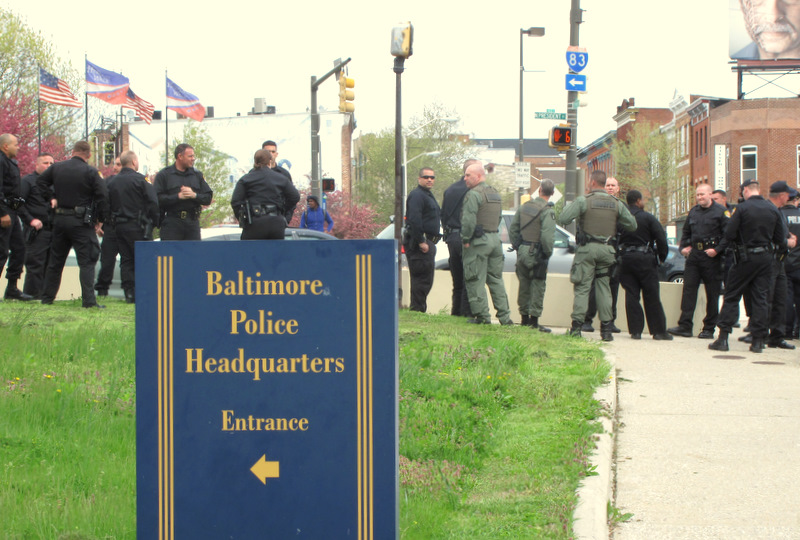 State Police and troopers from the Maryland Transportation Authority commingle with Baltimore police next to police headquarters. (Photo by Mark Reutter)

City Council President Bernard C. “Jack” Young greeted demonstrators and police officers alike, while Councilman Carl Stokes noted to CNN and others that if “the mayor hadn’t vetoed the Council’s body-camera bill [passed last November], we could have seen what happened to Freddie Gray.”

While there was a noticeable notch-down of tension during the City Hall protest, tempers flared tonight at the Western Police District building, where demonstrators have gathered for the last six evenings to protest Gray’s death.

Six Western District officers involved in the 25-year-old’s arrest and transport in a police wagon have been suspended with pay. Protesters have demanded that the officers be arrested and jailed. Batts says the police department’s investigation into Gray’s death wouldn’t be finished until May 1.

A group of protesters marched from City Hall to the Western District tonight. Police reported that two demonstrators were detained for disorderly conduct and destruction of property at Pennsylvania Avenue and Pitcher Street.

Otherwise, “protesters remain peaceful,” the police tweeted tonight, adding that the department “will continue to do everything possible to ensure the safety of those engaged in the expression of their constitutional rights.” 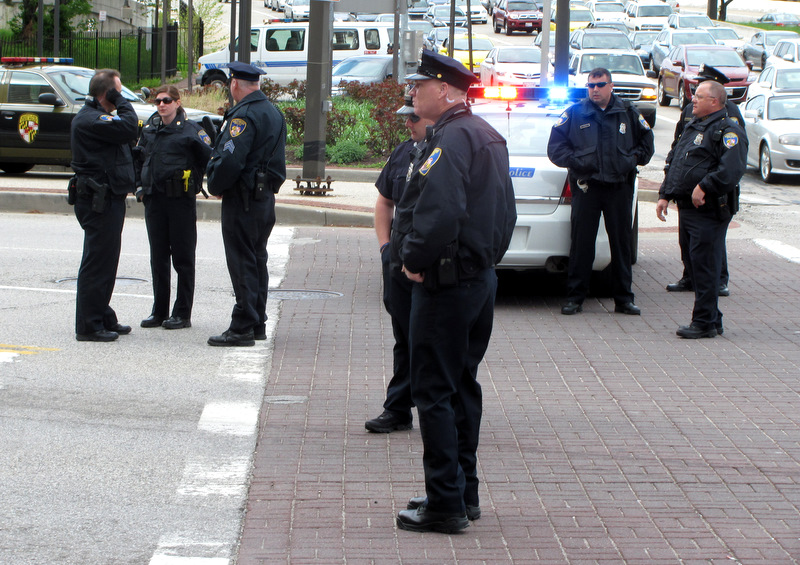 Traffic backs up on I-83 as Fayette Street is blocked off at President Street, two blocks from today’s protest. (Photo by Mark Reutter) 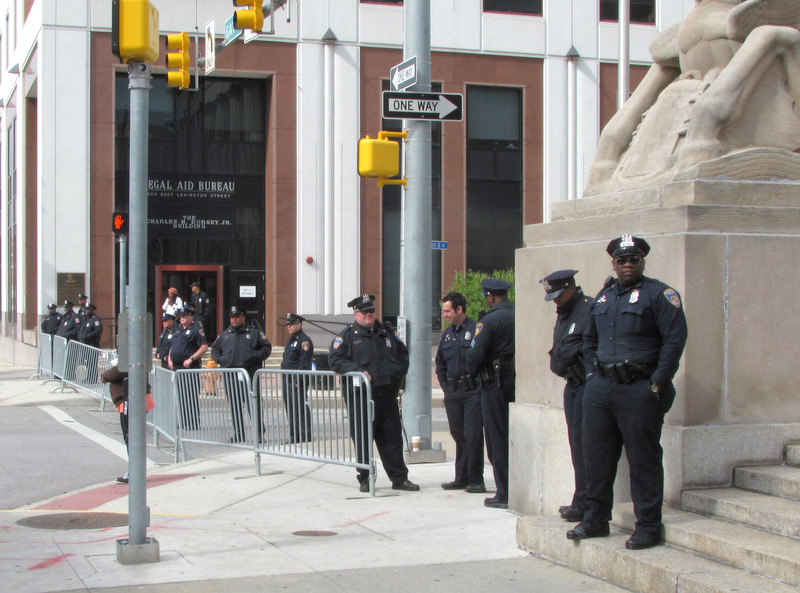 Still more police line up behind the barricade erected at Lexington and Gay streets. (Photo by Mark Reutter)