A day of protest over the Freddie Gray case that began with peaceful rallies in West Baltimore and outside City Hall ended in violence, as demonstrators – prevented from advancing on Camden Yards by a phalanx of police officers – hurled water bottles, smashed police car windows and trashed other vehicles.

The helmeted police, carrying sticks and wearing riot gear, responded with pepper spray and multiple arrests, in one case taking a swing at a demonstrator.

One officer took a hit from a bottle right in the visor. Another, sitting atop a police horse attempted, smiling, to catch a hurled bottle.

Largely peaceful but also intense was a rally in front of City Hall earlier in the day, featuring among other speakers, family members of Freddie Gray, the 25-year-old whose unexplained spinal cord injury and death after his April 12 arrest has inflamed tensions in Baltimore to their highest level in recent memory. 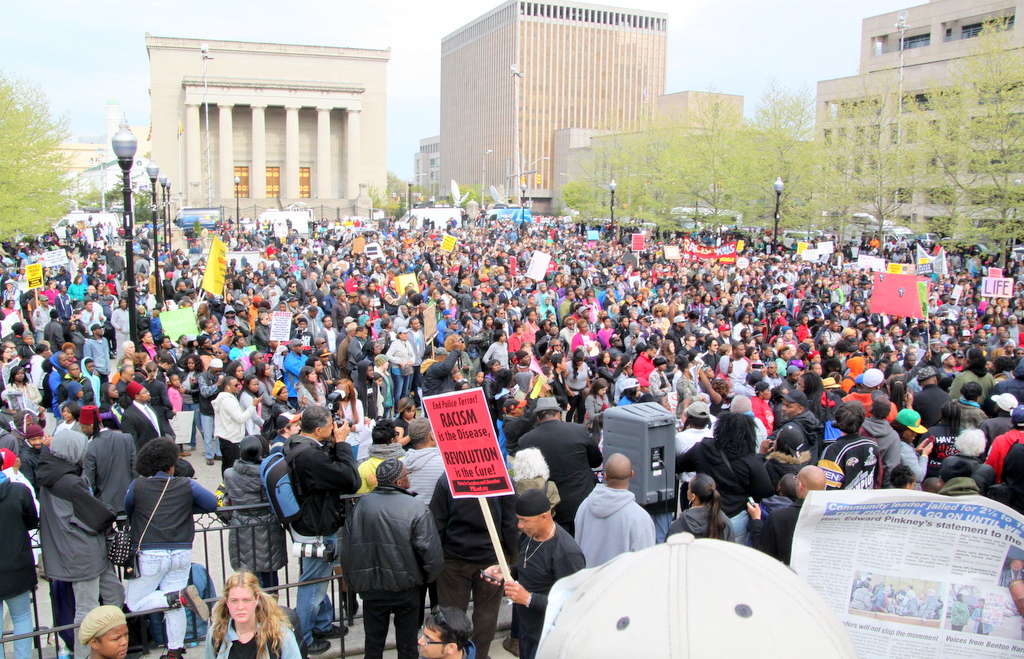 Demonstration in front of City Hall. The Baltimore Police Headquarters building is visible at upper right. (Photo by Fern Shen) 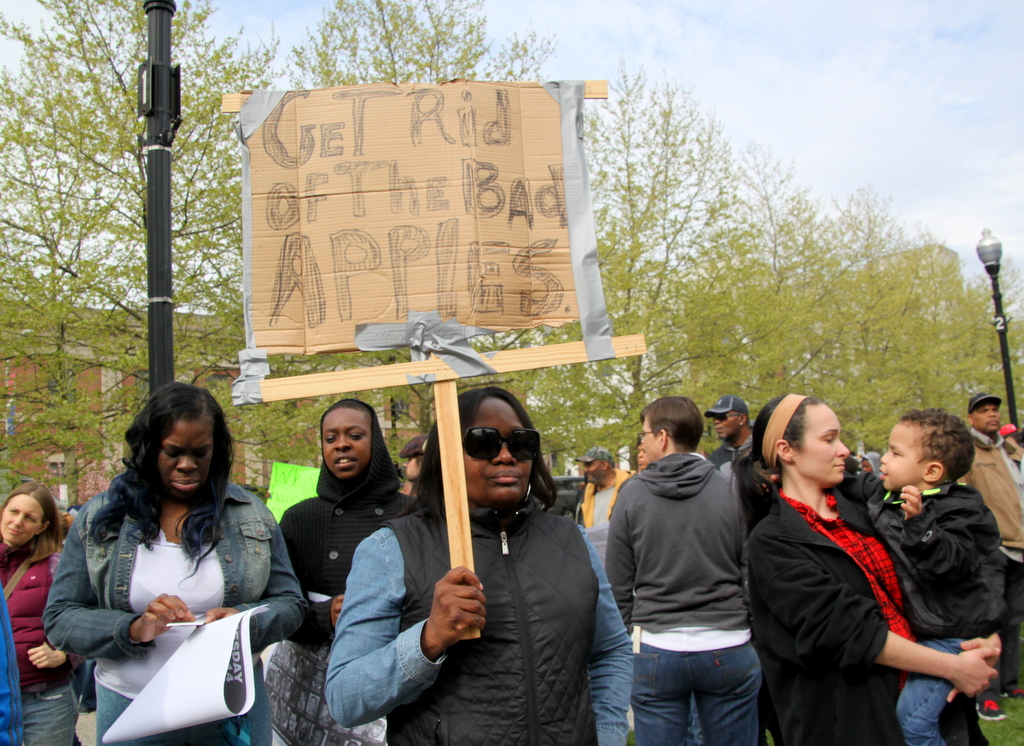 A demonstrator holds a hand-made sign in front of City Hall. (Photo by Fern Shen)

They were joined by family members of other Baltimore residents who have died after encounters with city police, including the sister of Tyrone West, and other speakers from across the country with similar stories.

“My son Malcolm Ferguson was murdered by police,” said Juanita Young, whose son was shot to death by police in the South Bronx in 2001. (The circumstances are unclear, but the family’s wrongful death suit resulted in a $4.4 million settlement.) 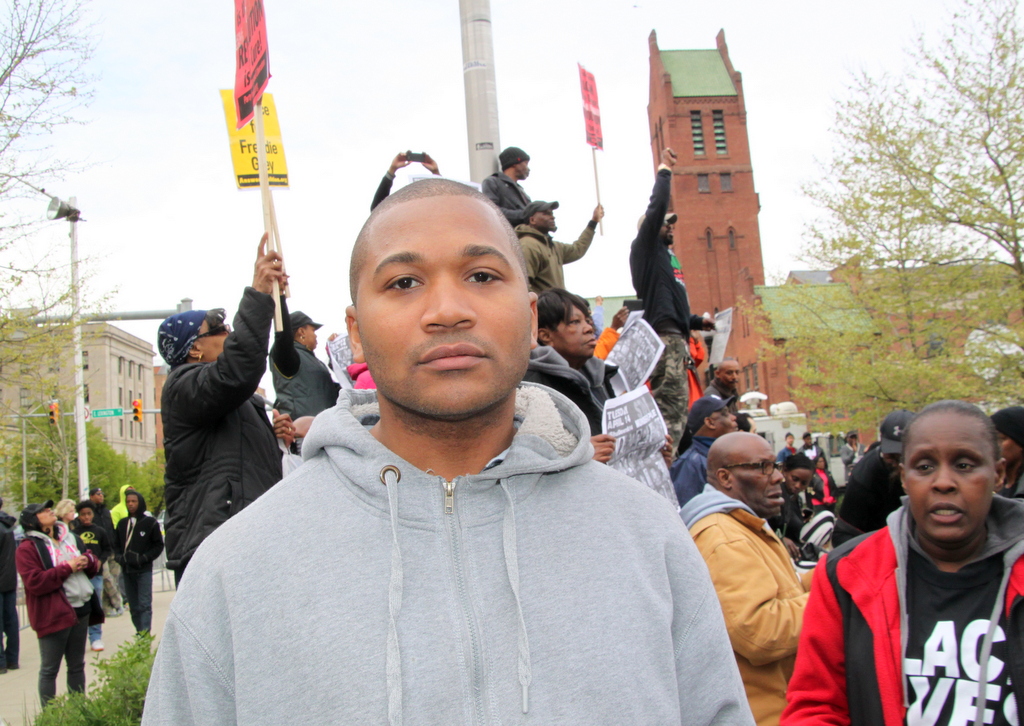 Nathaniel Thomas recalls his brother, Simmont Thomas, who was shot in the back by a Baltimore police officer in 1993. (Photo by Fern Shen)

In the crowd, speaking with a reporter, Nathaniel Thomas, 37, spoke of his brother, Simmont D. Thomas, shot in the back in 1993 by a police officer who was cleared and, he said, remains on the force.

“My brother was 14,” when he was killed, Thomas said, adding that he has little hope the Freddie Gray case would bring about change. “It happened in that same Western [police] District.”

“The same people who were in that building during the [Kurt] Schmoke administration who let this happen – they’re still there,” Thomas said. “They don’t care about changing a thing.”

“The only way we’re going to get justice, we’ve got to take to the streets,” Young told the crowd, which was awaiting the arrival of the marchers coming from Sandtown, where Gray had been arrested.

Behind the speakers, who addressed a crowd that filled War Memorial Plaza, the sound of police helicopters could be heard. Above them and silent, hovered a drone. 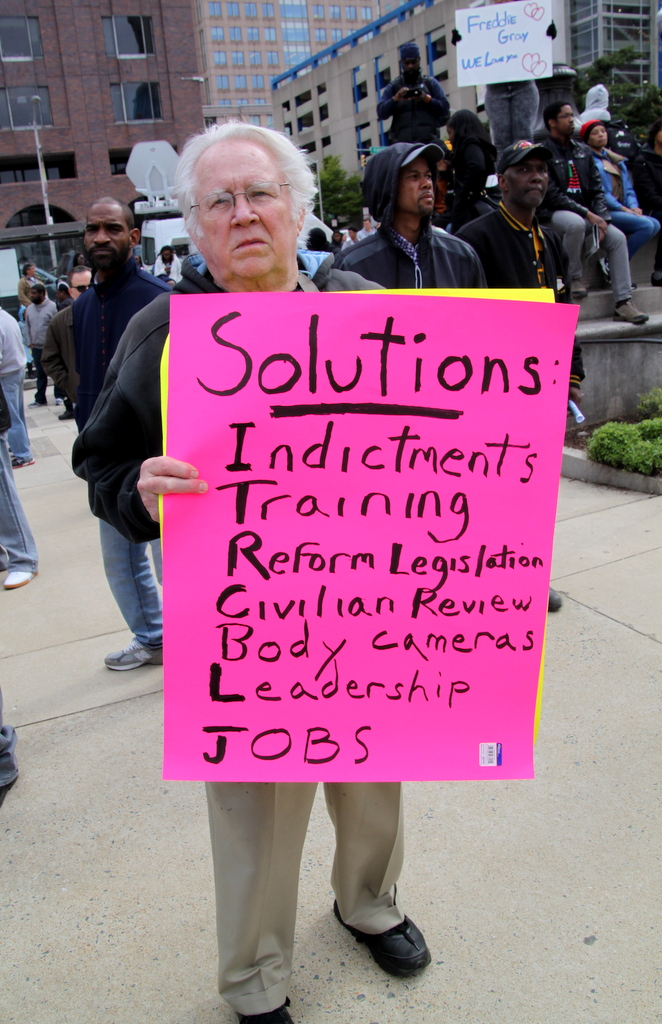 One of the signs held up outside City Hall focused on solutions. (Photo by Fern Shen)

“We’re about to be joined by a thousand people. They will have no choice but to listen to our voices,” said another speaker. “We have to have one voice, and that voice is justice!”

“Shut ’em down,” said Malik Shabazz, of the D.C.-based Black Lawyers for Justice. “We’ll be here ’til we get justice or the mayor resigns.”

“You want to get attention? Go to Camden Yards!” a woman in the crowd shouted.

And pretty soon, that’s what they did.

The chanting crowd went down Commerce Street to the Inner Harbor, snaking around the Pratt Street Pavilion, holding signs up to the windows of the Cheesecake Factory to customers sitting, startled, at tables inside.

Held Back at Stadium

At the ballpark, snaking through the parking lot in front of the Sports Legend Museum, the protesters met a line of several hundred police in riot gear. Behind them, fans atop the stadium could be seen looking down, silhouetted against the sky.

“The whole world is watching you, Baltimore police, and you have let us down,” a woman in the crowd screamed at the silent officers holding batons at the ready.

The marchers circled back around the museum and started moving along Camden Street. There a man called out to a black female police officer, “Sister, you don’t believe this!”

She responded with some heat of her own and the interaction quickly flamed up, as other demonstrators joined in, swarming around police cars and banging on them. The police pulled back, backing their vehicles out onto Howard Street with demonstrators pursuing.

What followed, after the arrival of police back-up, was the violent confrontation that had photographers and camera crews filming assiduously. 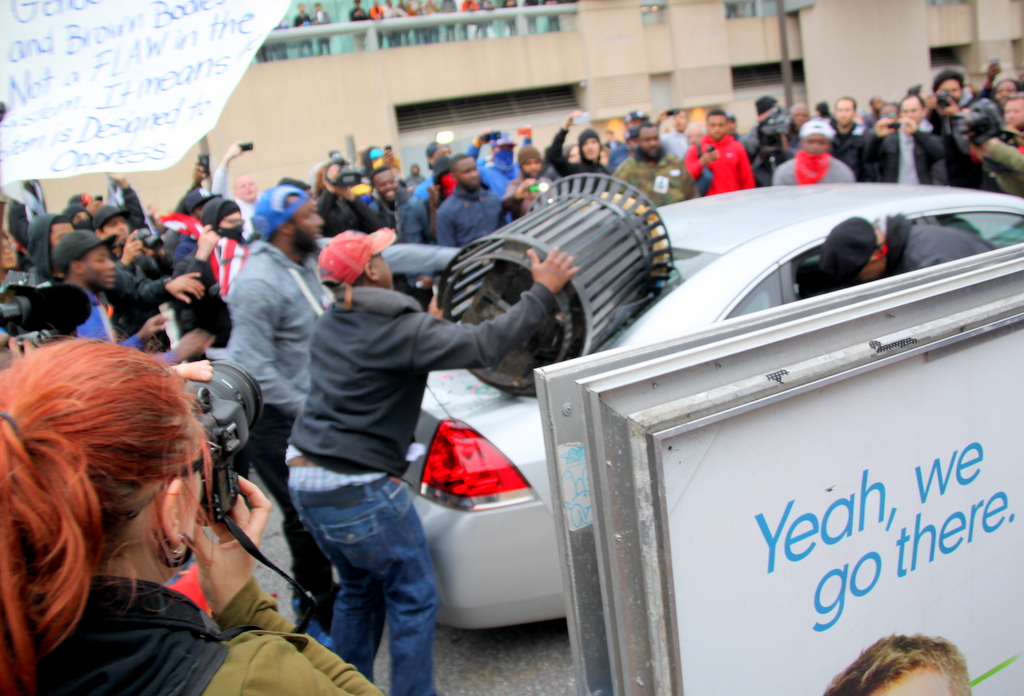 Demonstrators bash a car parked on Howard Street with a metal trash can. (Photo by Fern Shen) 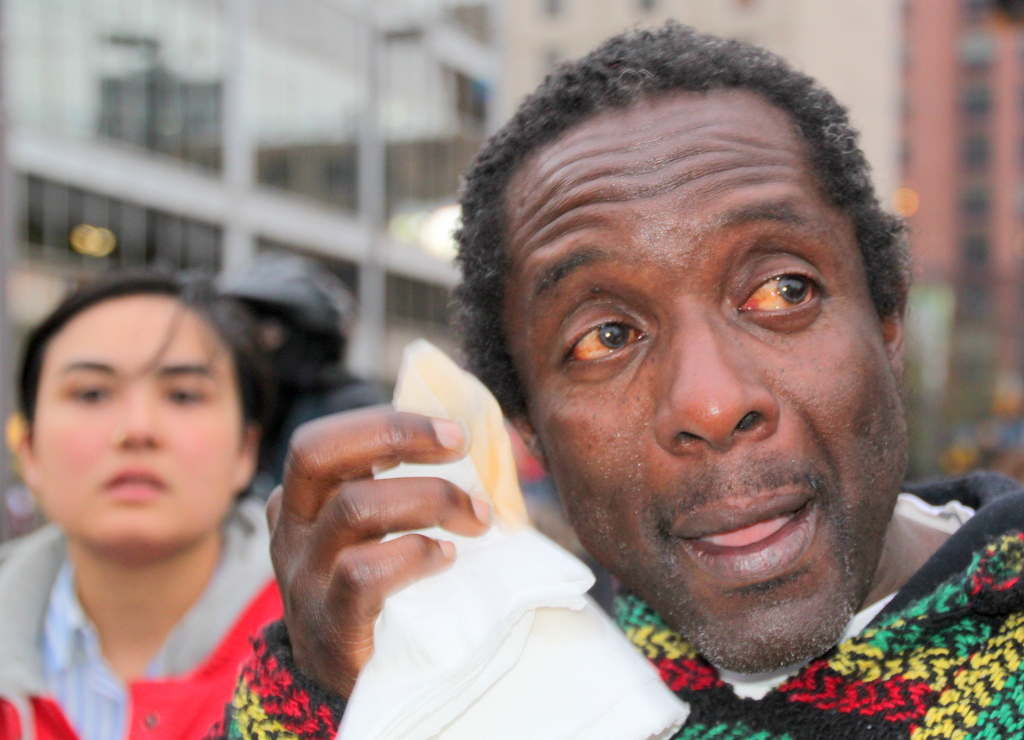 A demonstrator after being pepper sprayed. (Photo by Fern Shen) 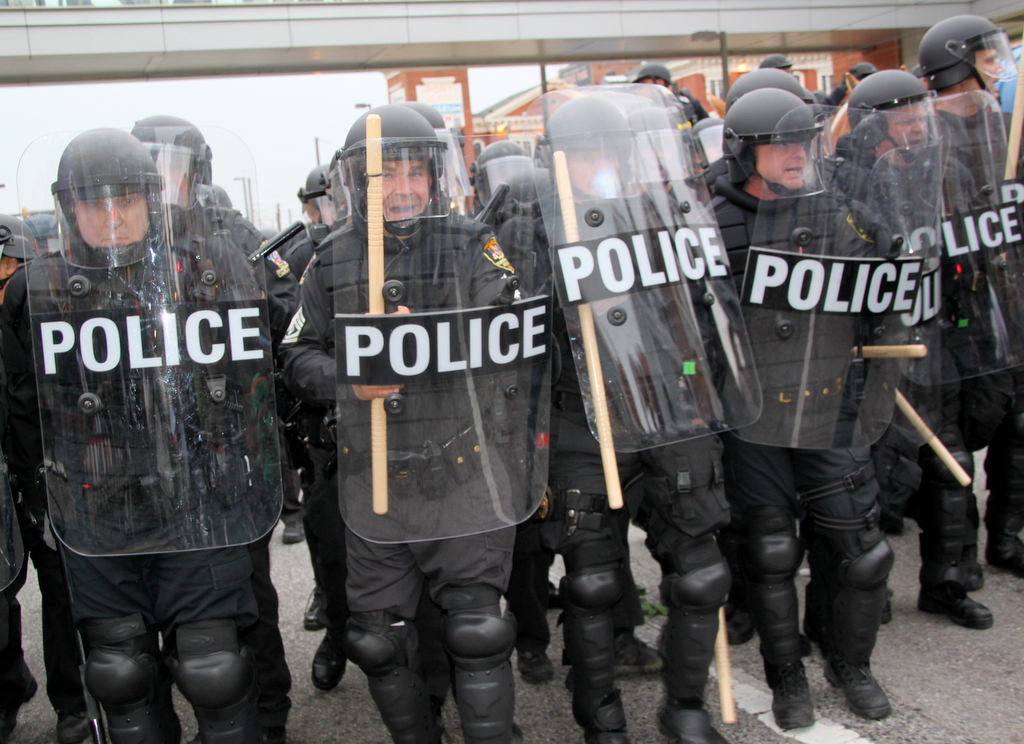 Police pushing the crowd to retreat with a chant of their own: “Push ’em back.” (Photo by Fern Shen) 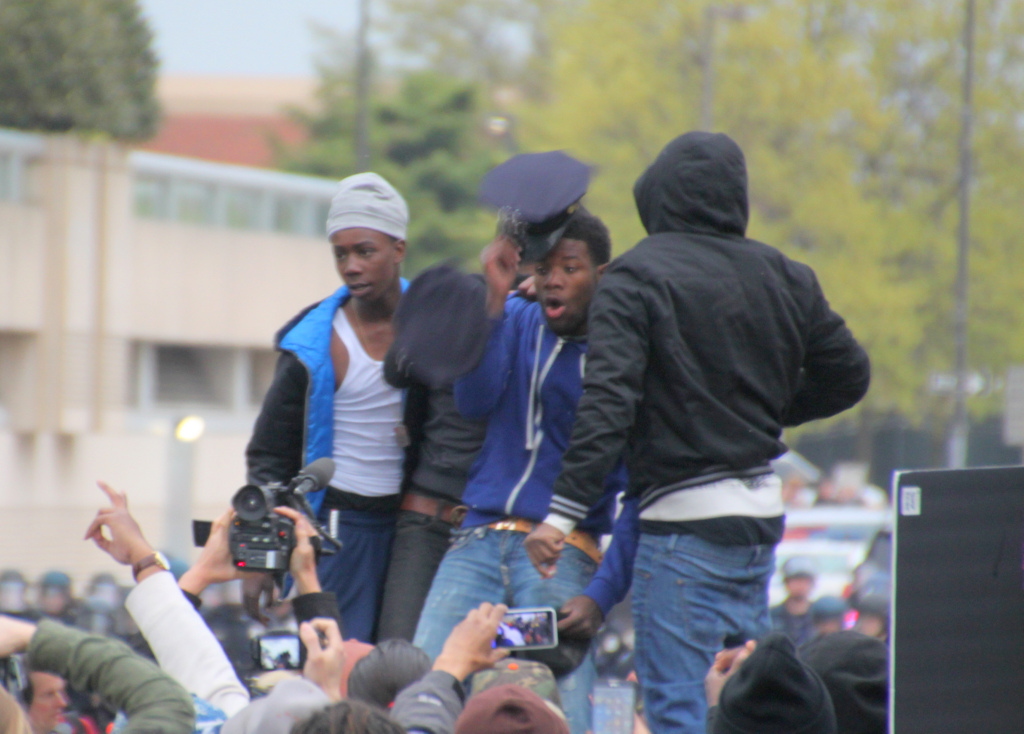 Atop a police car with smashed windows, one person waves a police officer’s hat. (Photo by Fern Shen)

There were scuffles, there was shoving, there were lulls broken by outbreaks of more scuffling and curses. Occasionally, a demonstrator would be pulled back through the line by police. At other times, the demonstrators themselves fell back to wash out the pepper spray from their eyes.

Demonstrators sat on the ground at one point and wouldn’t budge.

According to Police Commissioner Anthony W. Batts, speaking later to reporters, windows were smashed at several bars and restaurants, and police and other cars were trashed by demonstrators.

Additional property damage – mostly broken windows – was done by a group of protesters who headed east  to The Gallery at Calvert and Pratt streets. A 7-Eleven store at 301 North Howard Street was damaged and looted by a group of juveniles, Batts said.

Protesters then marched back to West Baltimore where Gray had been arrested on April 12.

Later last night, near the Western District police building, City Paper photographer Joe Giordano was beaten , as was a man who was with him, according to Giordano’s Instagram page. A City Paper post on the incident said the man was arrested but Giordano was not.

“He’s a photographer!” a voice can be heard in a video of the incident. “He’s press!” 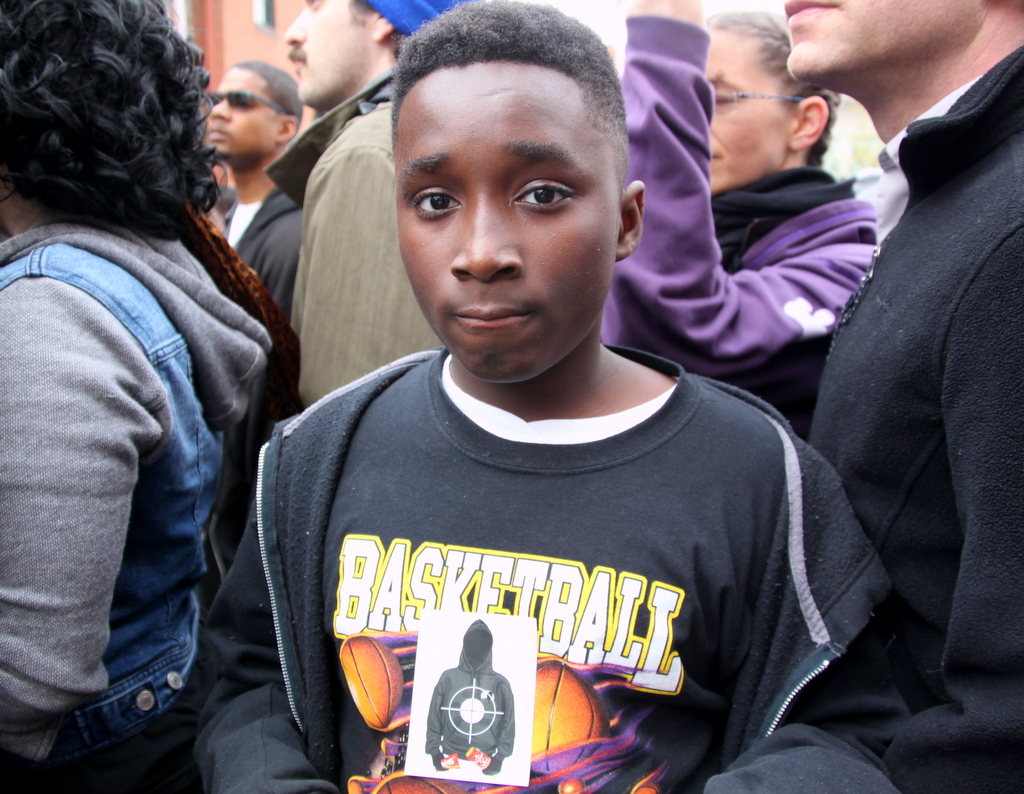 From the City Hall rally, one of the people wearing stickers showing a bull’s-eye and Skittles, a Trayvon Martin reference. (Photo by Fern Shen)