With Mayor Stephanie Rawlings-Blake blaming “outside agitators” for the violence at yesterday’s Freddie Gray rally, Baltimore police tonight released the names of 35 people arrested in connection with the unrest.

Nearly all of them are from Baltimore City. Thirty-one were adults, mostly males in their late 20s and early 30s but ranging up to age 47. Four were juveniles.

In a statement to the media, police acknowledge that “the vast majority of arrests reflect local residency,” but added, without elaboration, that “the Baltimore Police Department believes that outside agitators continue to be the instigators behind acts of violence and destruction.”

Today’s statement called most of yesterday’s protestors “peaceful and calm,” but that “groups of outside agitators led to small pockets of protestors engaged in criminal activity.”

Of the 31 adult arrests, 15 involved charges of “disorderly conduct” and “failure to obey a lawful order” in downtown Baltimore, mostly near Camden Yards where protesters clashed with police after the rally ended in front of City Hall.

There were 16 additional adult arrests last night in West Baltimore, involving charges of “assault of police,” throwing rocks and “rioting” at the Western Police District near the site of Freddy Gray’s controversial arrest on April 12.

The crowd at City Hall was already restive before a group of them set out from City Hall for Camden Yards and their encounter with policce.

At one point, a man took down the American flag flying from the flagpole on Holliday Street and another leaned down to touch the flame of a lighter to it as it lay on the ground.

“You ignorant motherfuckers!” a furious man said, managing to stop them, as photographers rushed to the scene and a city police officer came along to assist.

At the podium, control of the microphone went back and forth between people with varying messages, with some urging calm and unity. 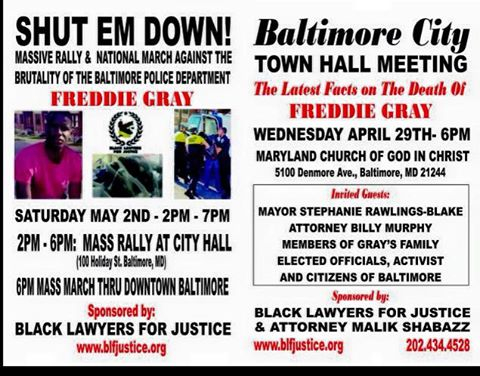 “Shut ’em down” poster on the Black Lawyers for Justice Facebook page about yesterday’s rally at City Hall and “6 pm Mass March thru Downtown Baltimore.”

“It wasn’t one family when they killed him,” a woman in the crowd shot back.

A turning point appeared to come shortly before 6 p.m. when Malik Z. Shabazz, president of the Washington-based Black Lawyers for Justice, exhorted the crowd at City Hall to “shut ‘em down.”

The former national chairman of the New Black Panther Party, Shabazz has repeatedly said the purpose of yesterday’s rally was to cause a major disruption in Baltimore.

“Things will change on Saturday,” he predicted, “and the struggle will be amplified.”

Some sources told The Brew that Shabazz’s group controlled the stage and microphones at Saturday’s rally and prevented local people from speaking to the crowd.

After Shabazz’s call to “shut ‘em down,” a woman in the crowd shouted, “You want to get attention? Go to Camden Yards!” Pretty soon, a group of several hundred began moving toward the waterfront.

According to Police Commissioner Anthony W. Batts, speaking to reporters last night, a “splinter group” of demonstrators – “very agitated” – left the City Hall grounds between 6 and 6:30 p.m. and proceeded to Camden Yards.

Batts gave the following account of what happened at Camden Yards, where the demonstrators were met by 300 police:

“Residents put themselves in between police officers and this agitated crowd, and asked for calm and asked for peace, which was very good to see. There appears to be conflict between the agitators themselves. Not from the peaceful citizens, but agitators, it looks like, there was conflict there.

“Then the group made its way [from] the north side of Camden Yards to the northwest side. They became very violent. They started to throw objects. They picked up aluminum barricades. They smashed out windows at our bars and our pubs located on the northwest side. Just wrecked havoc.”

Mayor: “Those Who Wished to Destroy Our City”

Mayor Rawlings-Blake offered a similar assessment in a statement she delivered last night from the ceremonial room on the second floor of City Hall.

“Unfortunately a small group of agitators intervened and turned what was otherwise a peaceful demonstration into a violent protest,” she said.

Calling the violence “unacceptable to me and everyone who lives in Baltimore,” Rawlings-Blake praised “those people who put themselves in harm’s way to stand between those who wished to destroy our city and the men and women who were fighting so hard to protect it.”

She specifically praised the local “faith community” and the Nation of Islam for creating a calm and peaceful environment. 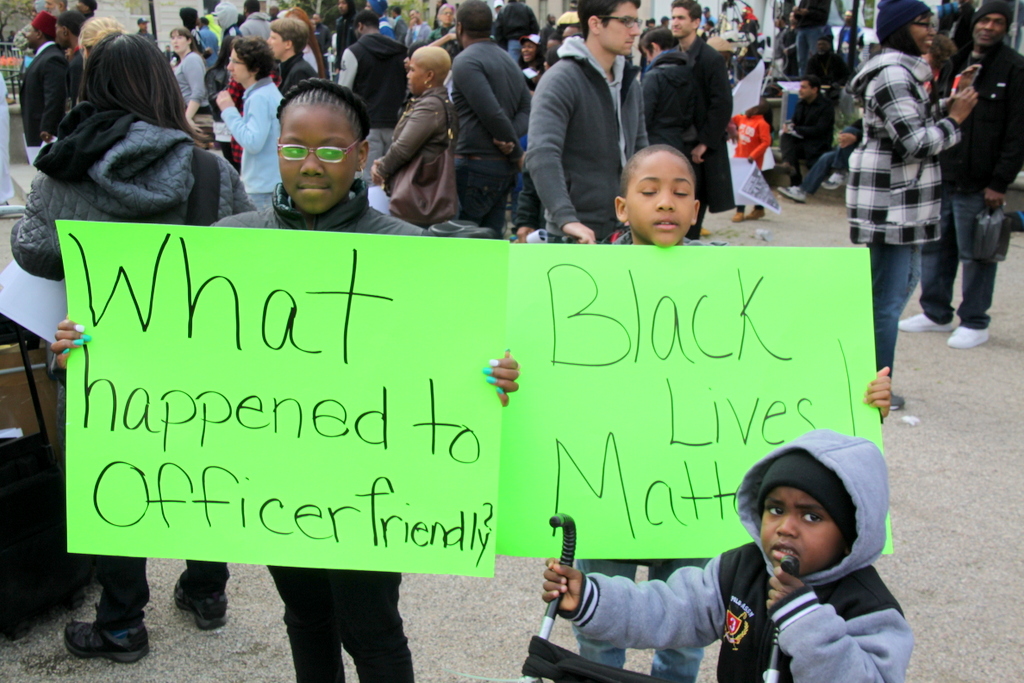 Children were among many people in the crowd at Freddie Gray rally. (Photo by Fern Shen) 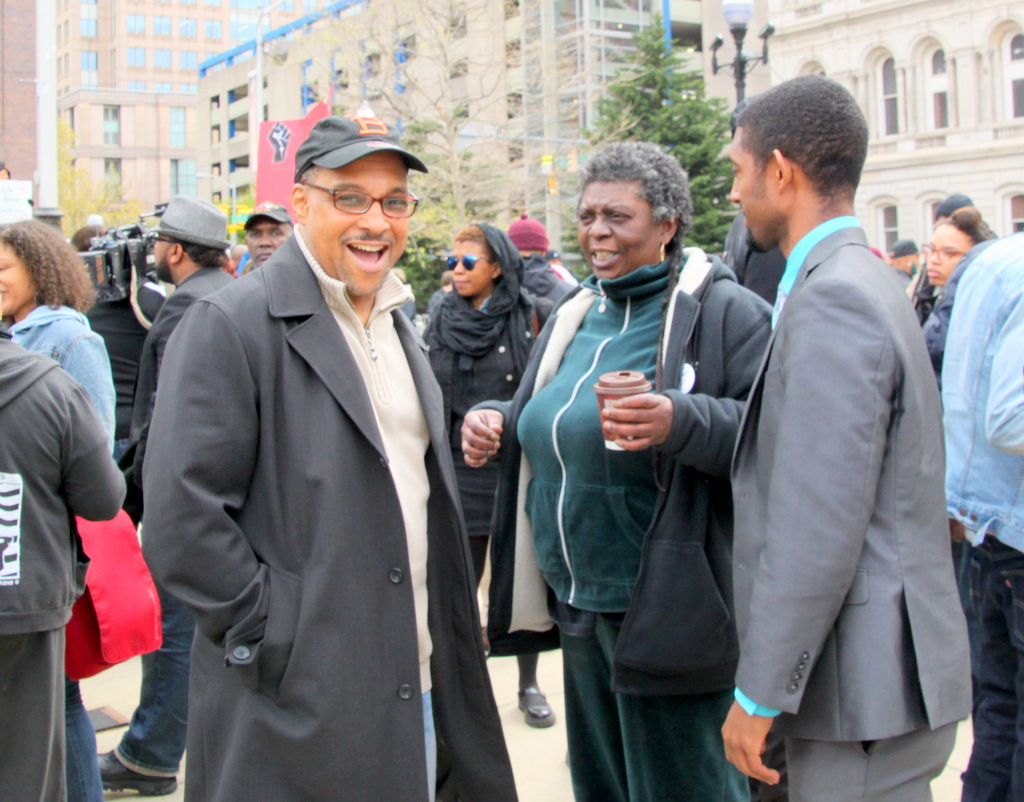 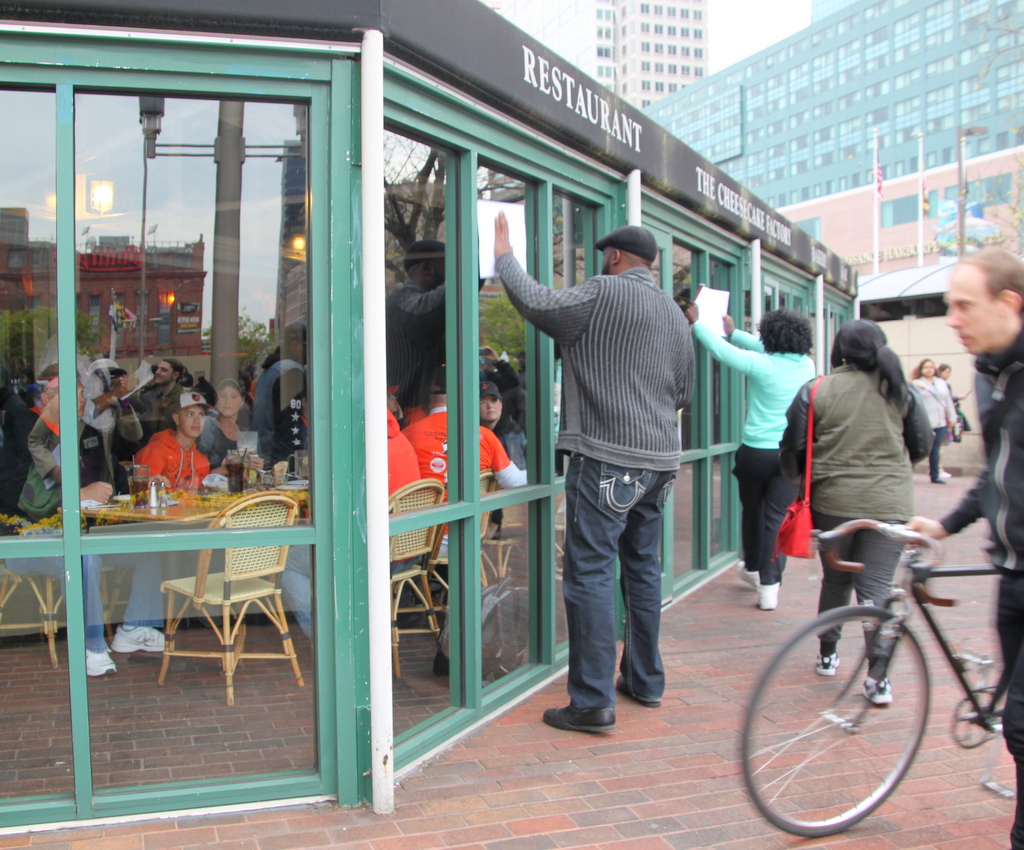 Protesters on their way to Camden Yards hold up signs before startled patrons eating at the Cheesecake Factory in Baltimore’s Inner Harbor. (Photo by Fern Shen) 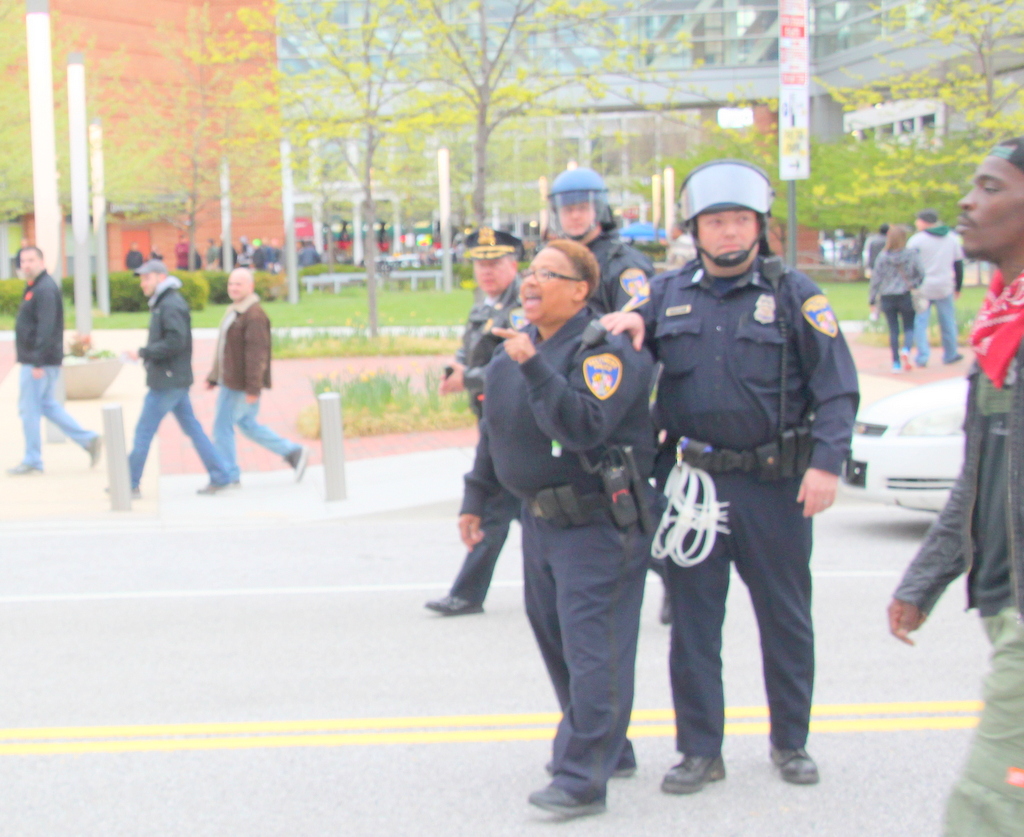 An officer on Camden Street got into a verbal back-and-forth with protesters who confronted police at Camden Yards. (Photo by Fern Shen) 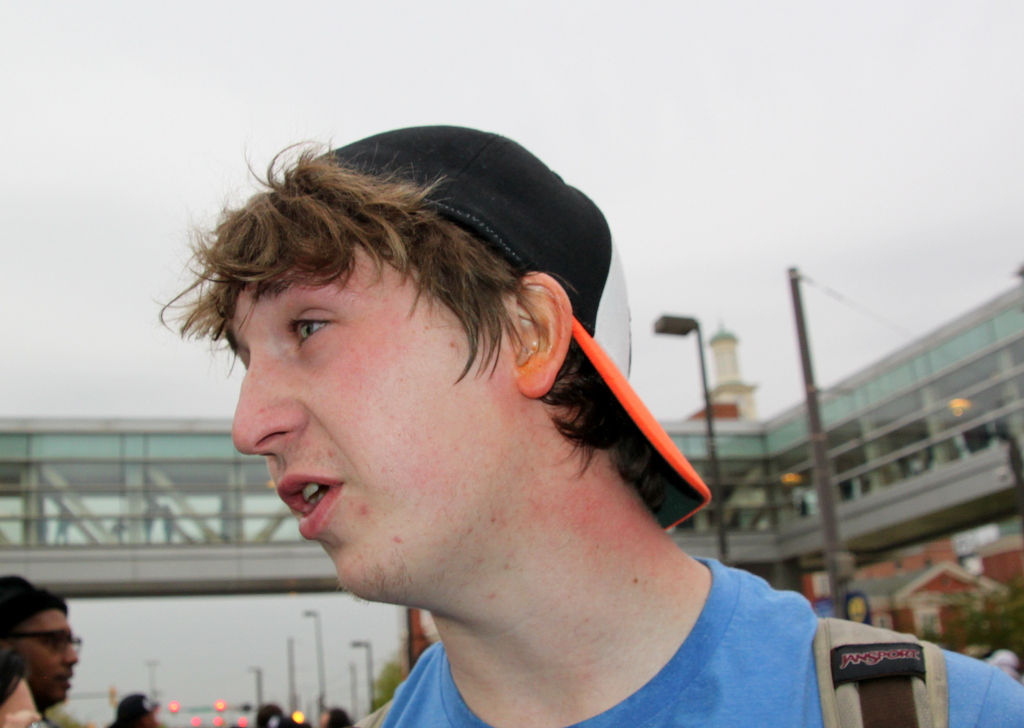 Zachary Garmoe, a student photographer from the University of Maryland Baltimore County newspaper “The Retriever,” was pepper-sprayed by police. (Photo by Fern Shen) 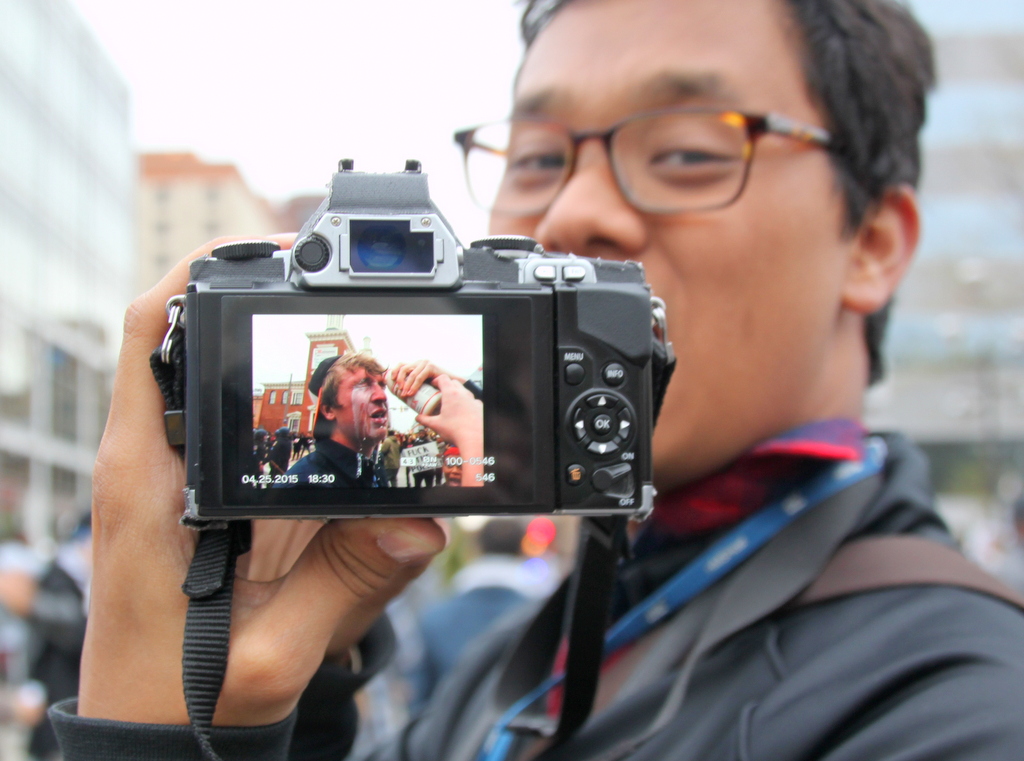 A “Retriever” colleague shows a photo of Garmoe immediately after he was pepper-sprayed. (Photo by Fern Shen) 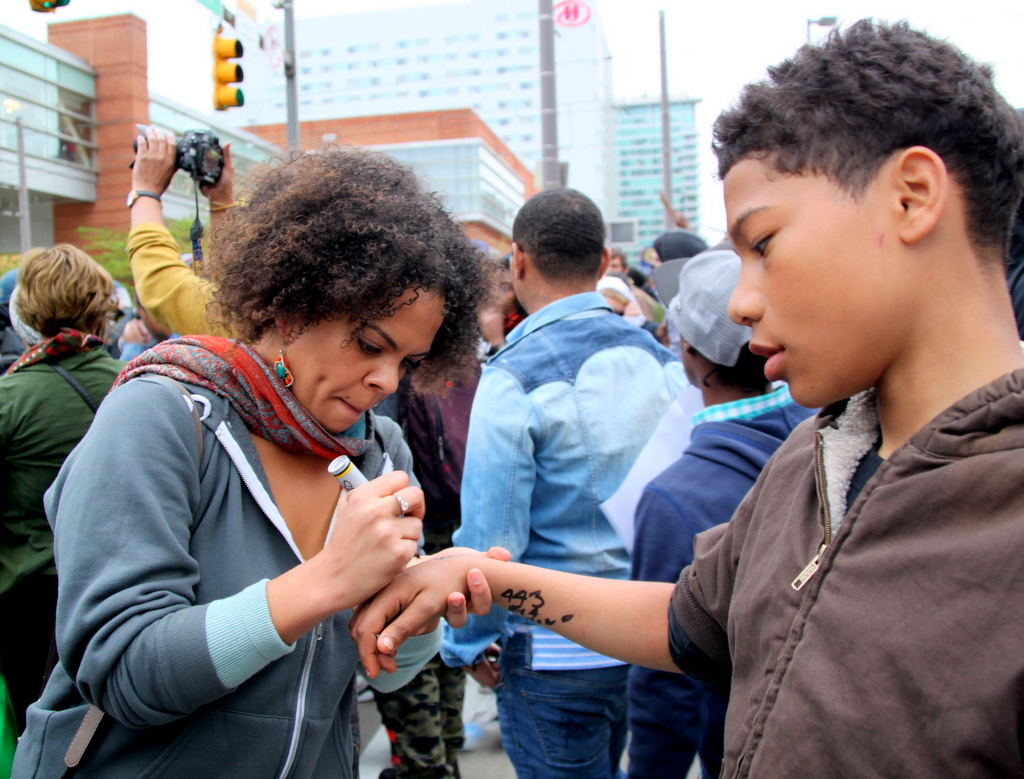 “They fucking disrespected us and now they’re going to pay for it,” said this boy, as a woman wrote a “legal team phone number” on his arm with a Sharpie. (Photo by Fern Shen) 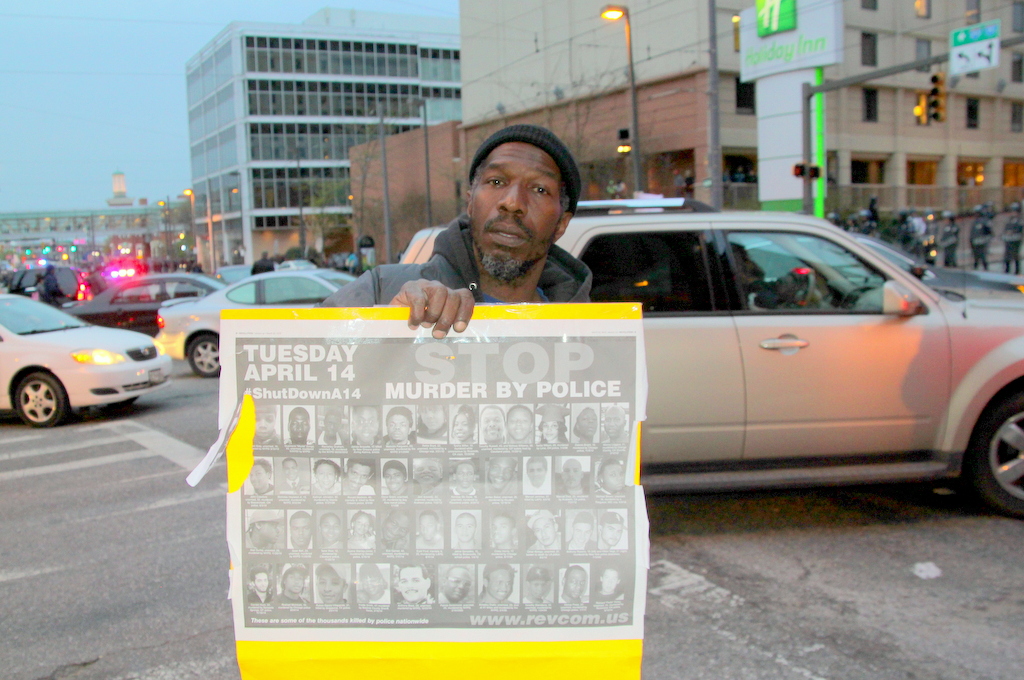 A lone protester facing Lombard Street traffic held up a sign with the names of people who died in confrontations with police. “She’s 7 years old,” he said, pointing to one picture. “What did she do to deserve this?” (Photo by Fern Shen)