Whisper their name silently to yourself, said one of the speakers at last night’s memorial service for homeless people who died in Baltimore in 2015.

Sitting on the curb – eyes closed, hands clasped, holding utterly still – John Blake seemed to be doing just that as he listened to 102 names being read aloud.

“I was out here one time,” he said softly, pointing away from the gathering of about 200 people lit by the Jones Falls Expressway streetlights to the darkness nearby beside St. Vincent de Paul Church.

“I learned how to be out here with just quilts and blankets,” he said, his eyes brimming with tears as the list of names tolled on. “It’s hard ’cause I know a bunch of ’em.”

A volunteer for Paul’s Place in Southwest Baltimore, Blake, 52, has a place to live now.

After a heart attack and two strokes, the former roofer came away from homelessness with what he considers remarkably good health. “All I have is a little stutter!” he says. 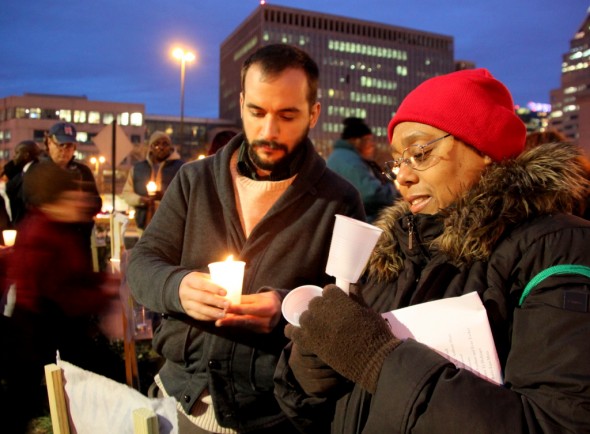 Observing a tradition on the longest night of the year, people remember those who died in Baltimore while homeless. (Photo by Fern Shen)

Now he helps feed people who come to Paul’s Place for a hot meal and recently assisted at the Christmas party for homeless children there.

Asked what he would like readers to know about people in Baltimore who have no homes, he said, “That they can help them. It’s hard, but it can be done.”

Blake’s message was gentle by comparison with the pointed words of many who spoke last night as Baltimore participated in Homeless Persons’ Memorial Day.

City leaders, he said, “need to care more about people than our bond rating.”

His remark about the temperature comes in the wake of the furor touched off last week after a city official said Baltimore is lowering the threshold for providing additional shelter beds from 13 degrees to zero degrees. Budget constraints was the reason cited. 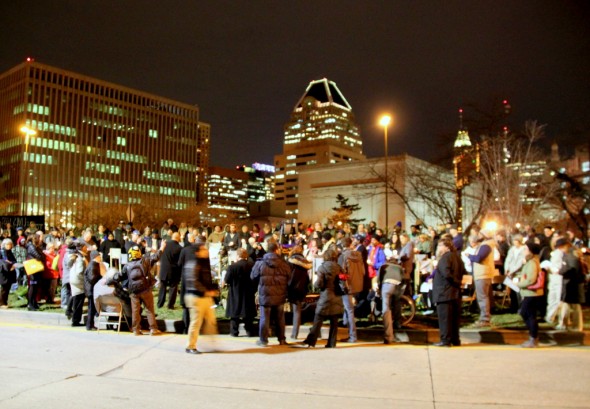 Homeless Person’s Memorial Day in 2015 took place along the Fallsway near I-83, the Jones Falls Expressway. (Photo by Fern Shen)

Yesterday, the city said that the mayor and the health commissioner never agreed to the zero-degree threshold, which had been announced at a public meeting by Jacqueline Duval-Harvey, director of the Mayor’s Office of Homeless Services.

In the wake of the controversy, advocates wondering what this year’s cold weather plan for the homeless will be got their answer, including a promise that starting in January, 32 degrees will be the trigger for shelter beds.

“Whereas Baltimore City has established the vision to making homelessness rare and brief,  our community recommits to working for affordable housing, accessible health care and livable incomes.”

“The mayor is a hypocrite!” someone in the crowd yelled after Kirstaetter concluded. That touched off other hecklers.

Many features of this year’s event spoke to the antipathy advocates are feeling toward City Hall lately, including the event’s venue.

Traditionally staged at the Inner Harbor, the memorial was held this year at a spot between The Fallsway and the I-83 on-ramp where people have slept in tents and make-shift shelters. 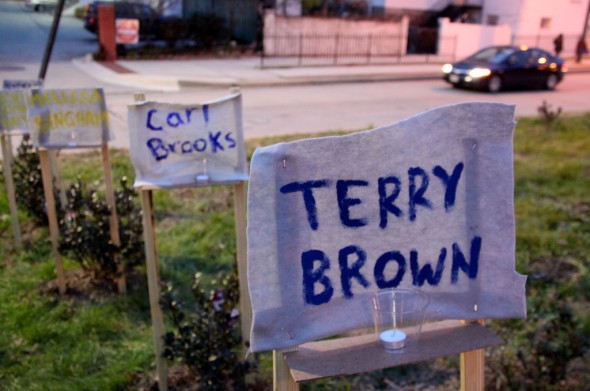 Signs bearing the names of homeless people who died were erected next to holly bushes planted to discourage encampments along I-83.

Signs with the names of people who died homeless were posted next to each of the prickly holly bushes the city has planted in that spot to discourage encampment activity.

Advocates this year have blasted the city for its policy of encampment clearing, saying it has been needlessly harsh and failed to identify alternative housing for encampment dwellers.

In spite of the holly bushes, the patch of land where people assembled to hear songs sung (including “Hard Times Come Again No More”) and prayers offered (including “The Serenity Prayer”) was itself a small encampment.

Back behind the crowd, a couple of tents and belongings stored in trash bags and a shopping cart spoke to that.

Traffic sounds and ambulance sirens mingled with the tolling church bell and the words of the speakers.

Night time, for most of us, is a time of quiet and respite, observed one of the speakers, Rev. Dr. C. Anthony Hunt of Epworth United Methodist Chapel.

“For many, far too many persons in our city and in our state, the night is their home – the place where they are forced to lay their heads and wander and wonder with perpetual dismay: how long the night and if the night will ever end,” he intoned. 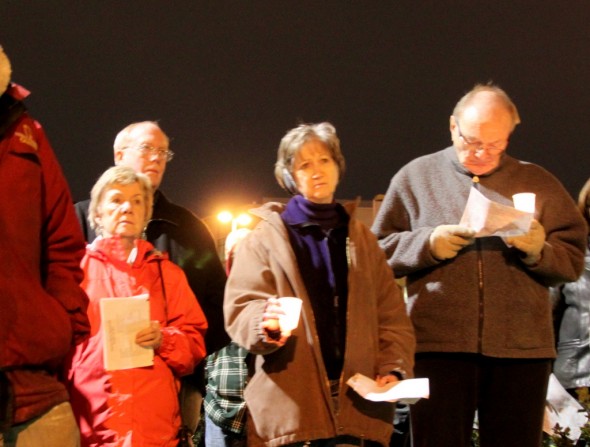 At a memorial vigil speakers called for compassion for the city’s homeless residents. (Photo by Fern Shen)

One speaker said he thought the idea of ending homelessness completely is not possible. But Kevin Lindamood, chief executive officer of Health Care for the Homeless, disagreed, saying resolve is all it takes.

“We can build cities that reach to the sky. We can travel to the moon and to the stars,” he said, going on to lead the crowd in a chant. “Not one person. Not one night.”

Hullinger, for his part, inveighed against “our governor and our mayor who could do so much more.” He urged the crowd to sign and mail postcards to City Hall that a volunteer was handing out.

The cards call on the city to begin offering shelter as soon as the temperature hits 32 degrees and remain open through the winter season regardless of temperature.

Holding a flickering candle, Portia Hilton spoke about why she came to the memorial.

“I know a lot of people who died being homeless. I had a grandbaby named ‘Blessing’ who died when her mother was homeless,” said the 53-year-old from Curtis Bay.

Hilton said she has lived in the city all her life and watched the number of people sleeping on the streets explode.

“There were always some, but now I see people everywhere,” she said. “Something’s changed.” 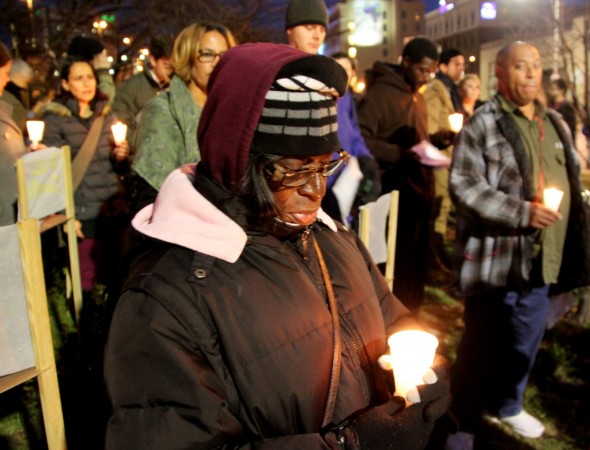 Portia Hilton said she is seeing more and more people sleeping on the streets. (Photo by Fern Shen)

An informal survey of old news stories about the memorial event in Baltimore suggests she is right.

A story from 2001 says there were 41 deaths of people receiving homeless services in Baltimore. In 2007, 70 names were read at the ceremony.

The speakers last night recited the names of 102 people, starting with Sydell Armstrong and ending with Allen Young. 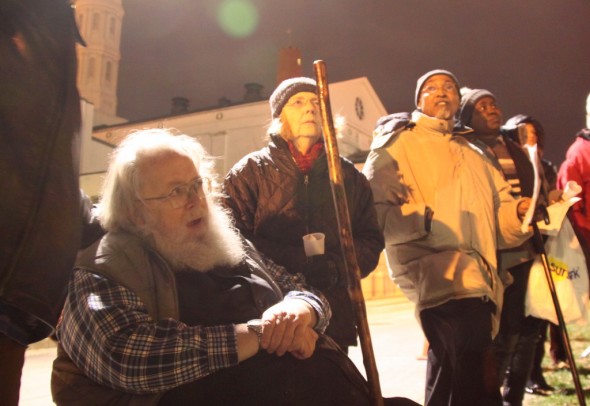