A showdown loomed at a homeless person’s encampment last night under the Jones Falls Expressway, where about a dozen people had decided to stay despite an earlier agreement to leave before the start of the Sunday Baltimore Farmer’s Market.

Uniformed police officers waited at the intersection of Saratoga and Gay streets to remove the tents – the city would clear the place at midnight, they warned.

As the hour approached, some camp residents began moving their tents and other belongings into the street, placing metal barriers there and dumping trash and food onto the roadway. Other campers quietly packed their things into shopping bags and suitcases.

While the officers and a reporter watched, Alonzo Coley walked in a circle around the tent he had placed on Saratoga Street, pouring what appeared to be gas from a red gas can on the road.

He then positioned himself inside the tent and lit a lighter.

A group of nine officers approached Coley who lunged out of the tent, clutching the gas can. The officers tackled him to the ground, shooting him with a Taser. The gas can lay nearby. An officer kicked the lighter away. 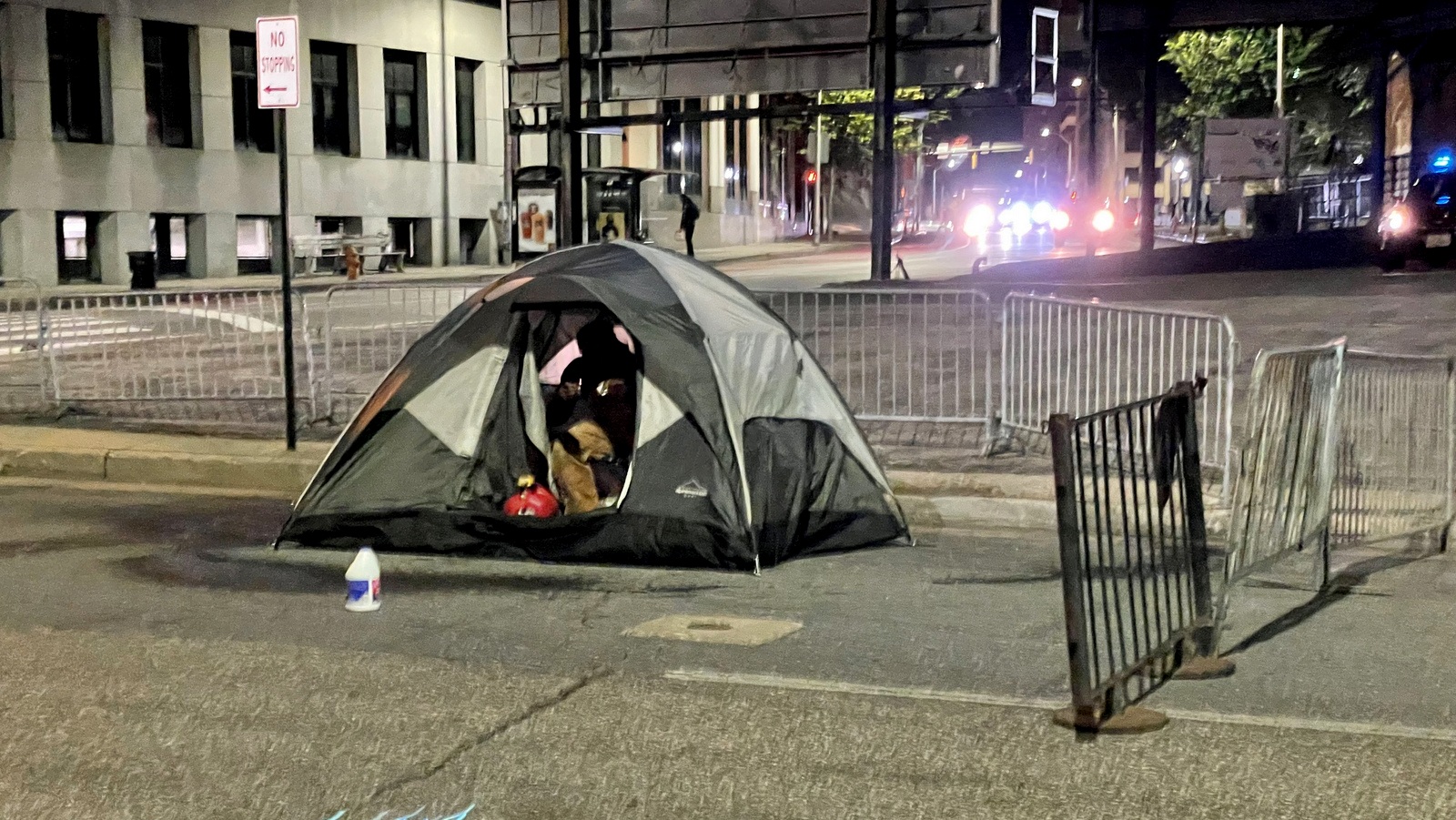 “Why do y’all have to be so violent – why?” advocate Christina Flowers screamed at the officers after they held the 33-year-old Coley down on the ground.

An officer had pulled Flowers by the arm to get her away from the entrance to the tent where they first confronted Coley.

Asked if Coley was being arrested, Major John Webb, declined to say.

“He’s in our custody at this point, that’s all I can say,” Webb said. “We’re evaluating his mental condition.”

(Police radio transmission tweeted by @MolotovFlicker indicates police believed Coley had been displaying a cigarette that he had lit with the lighter.) 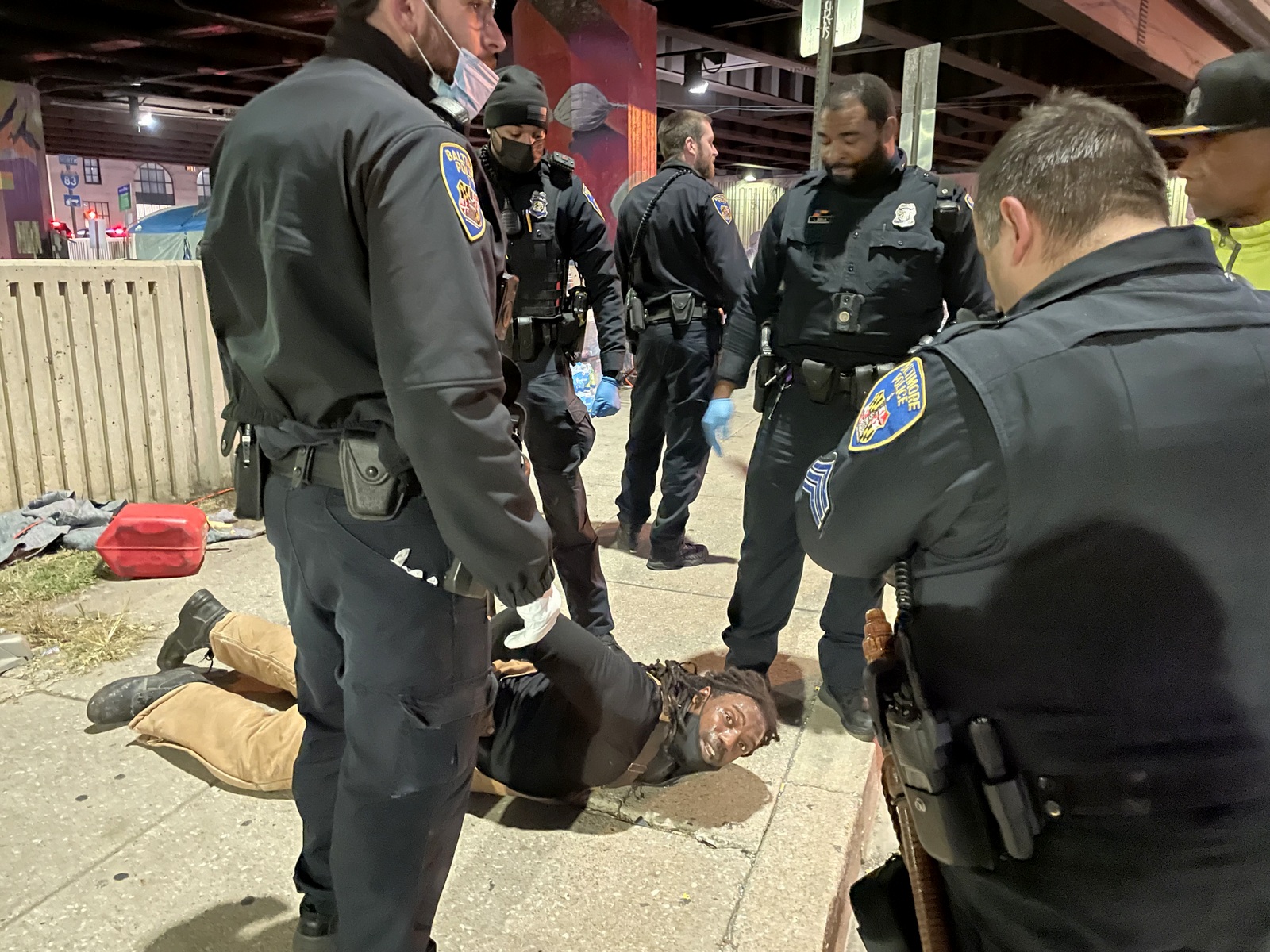 Tired of being “cycled around”

It was a violent end to a conflict that had surfaced Thursday when the city posted a notice that the area was to be cleared the next day.

The conflict reportedly had been resolved. After talks with the city, the group had agreed to temporarily move across the street to a vacant private parking lot.

City officials, along with police, came at noon yesterday and shut off the power, according to Flowers, founder of Belvedere Real Care Providers Network.

But Flowers and others said the encampment residents had at some point changed their minds and decided to make a stand.

“They don’t want to feel like they’re being cycled around from one temporary set-up to another every time there’s some event,” said Jason Rodriguez, deputy executive director of People Empowered by the Struggle. 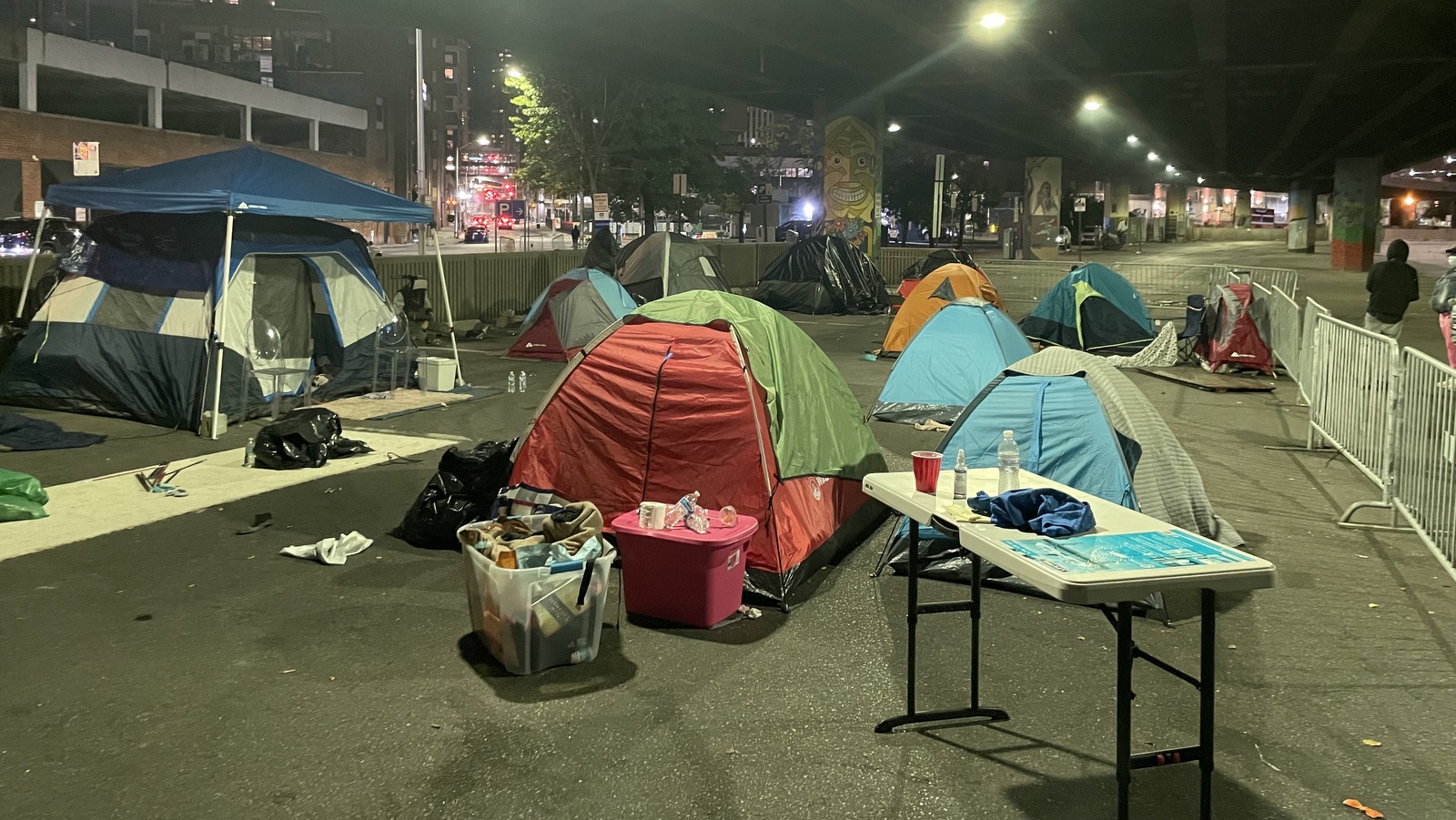 How the encampment looked before it was cleared. Below: Police line up on Saratoga. (Fern Shen) 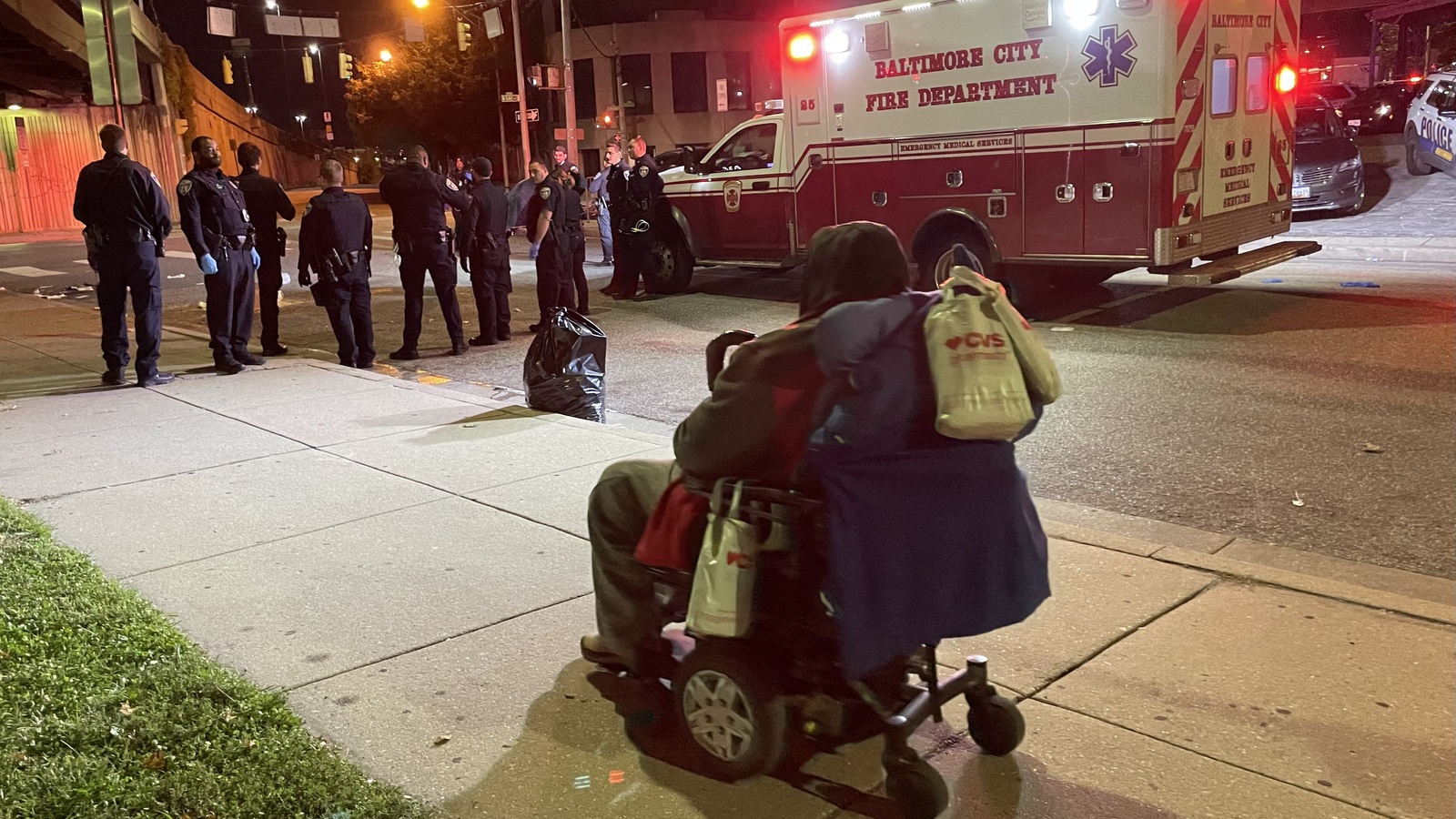 Rodriguez said some people felt burned by the way an August protest in front of City Hall, also organized by Flowers, had played out.

Tents for about 28 people had been set up on War Memorial Plaza. Mayor Brandon Scott and other elected officials were set to preside over the annual Back-To-School backpack giveaway event the next day.

The group agreed to go to shelters, and a spokeswoman for Scott said they would be connected to social services.

The group last night said things hadn’t worked out well for those protesters, many who wound up back on the streets.

“The shelters are not conducive to people with mental illness. Or to people who want to manage their own lives,” said Rev. Andre H. Humphrey, commander of the Baltimore Trauma Response Team.

“They want unconditional rooms – not shelters,” said Humphrey, who was on hand to monitor the situation.

Coley, speaking with The Brew before he was detained by police, said he had qualified for “rapid rehousing” assistance because of multiple disabilities and was being housed at the Days Inn.

But after a time, he said, he was “locked out because I was filing a lot of complaints.” He started sleeping in his pickup truck, but said he was unable to stay there because “the weather changed.”

“They’re in ‘occupy’ mode. They’re tired of being buffeted around,” Rodriguez said.

According to Flowers, homeless residents continue to be underserved despite the $90 million in federal Covid-19 relief funds that the Scott administration has promised would be spent to purchase hotels and fund other programs to help ease the crisis.

Unhoused people are currently living in at least 10 encampments around the city, she and others say.

Over the years, previous mayoral administrations have closed or tried to close encampments along the downtown JFX corridor, reducing the available space in a coveted area that is protected from the elements.

Humphrey said the protesters were upset about the loss of space that was “a safe haven out of the rain.” 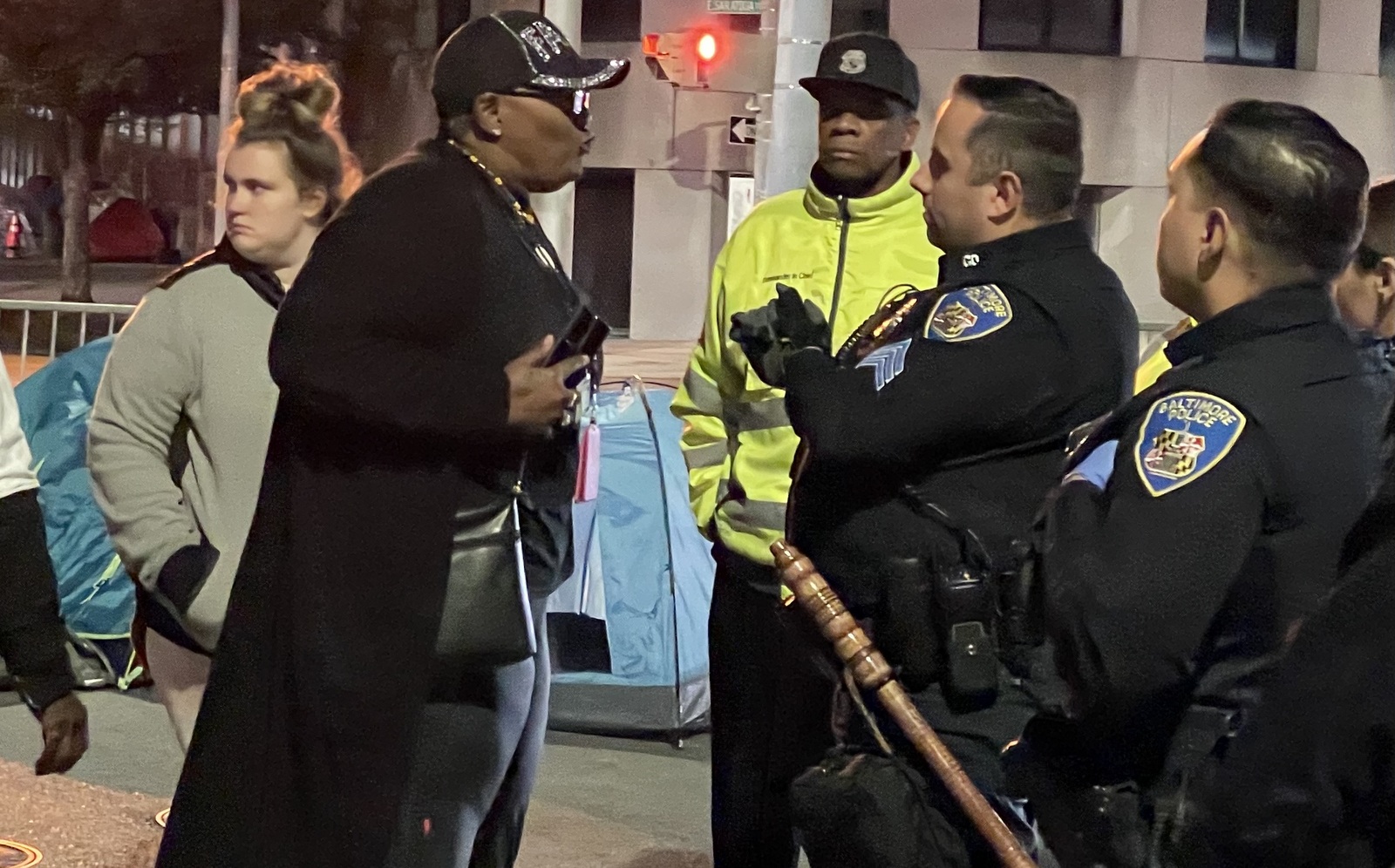 Before last night’s confrontation with Coley erupted, the BPD’s Webb told the encampment group they could occupy the Saratoga Street sidewalk outside the Farmer’s Market area.

“You can have this whole area next to the sidewalk, but not that area,” he said, pointing to the place where in a few hours vendors would be selling produce, flowers and prepared food. “That’s the permanent area for the Farmer’s Market.”

Also off limits, Webb explained, was the street. “You can’t shut down the road because of ambulances and fire trucks and emergencies. I’m not going to have the citizens wait because the road’s blocked.”

“I’ve been waiting for housing for years,” Coley shot back.